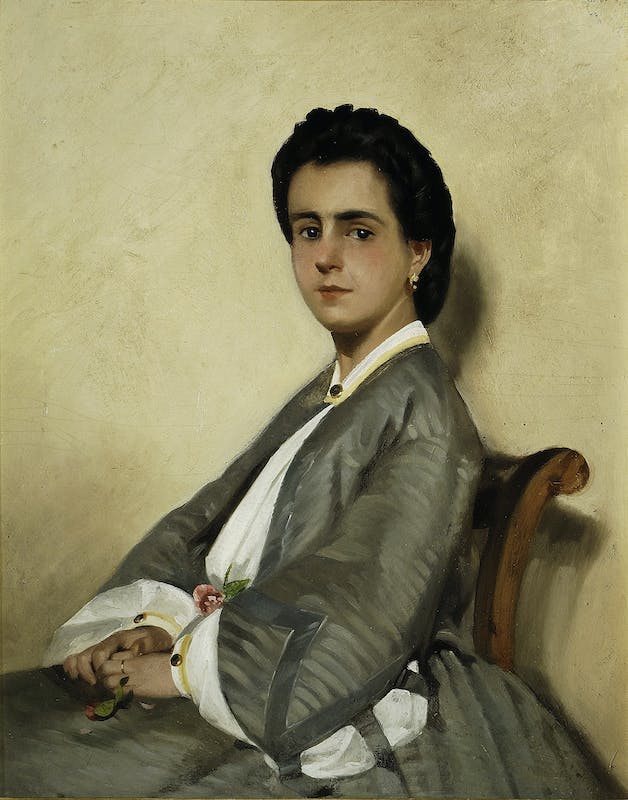 The young woman's gaze is the portrait's characteristic feature: it engages the observer and invites the exploration of the carefully executed details such as the elaborate grey dress, the white blouse with wide sleeves, the three exquisite buttons on the collar and cuffs, and the pink rose held in her lap mirroring the colours of her cheeks. The calibrated composition of the painting complements the simple, almost meagre pictorial techniques used to create it perfectly, characterized by a simple colour palette and pyramidal composition, with the watchful eyes of the young woman at the top. The neutral background and the careful use of light emphasize the expressiveness and introspection of the young woman. The setting and the space physically occupied by the figure are depicted realistically, as evidenced by the shadow on the wall and the rotation of the head towards the observer.

The pictorial simplicity and careful rendering of the space are a result of Fattori's study of fifteenth-century Florentine painting, but the vivacity of the expression and the details of the clothing are more characteristic of the period in which the portrait was painted.

The inscription on the back of the painting bears the young woman’s unusual name, but it is not certain if the note was written by Fattori himself nor if there was an Argia in his family. Disregarding the signature of the inscription, the date of the work becomes less than certain: it has been suggested that the painting dates to a few years earlier, when at the Caffé Michelangelo in Florence Fattori used to reflect on shades, brush strokes and painting from  real life at the Michelangelo Café with other Macchiaioli artists who, on returning from Paris, brought news of the new minimalistic study of shape under the effects of light promoted by Corot and the landscape painters of the Barbizon School.

The possibility of studying psychological features by translating them into art was of great interest to Fattori, who willingly grappled with the genre of portrait painting throughout his long artistic career.