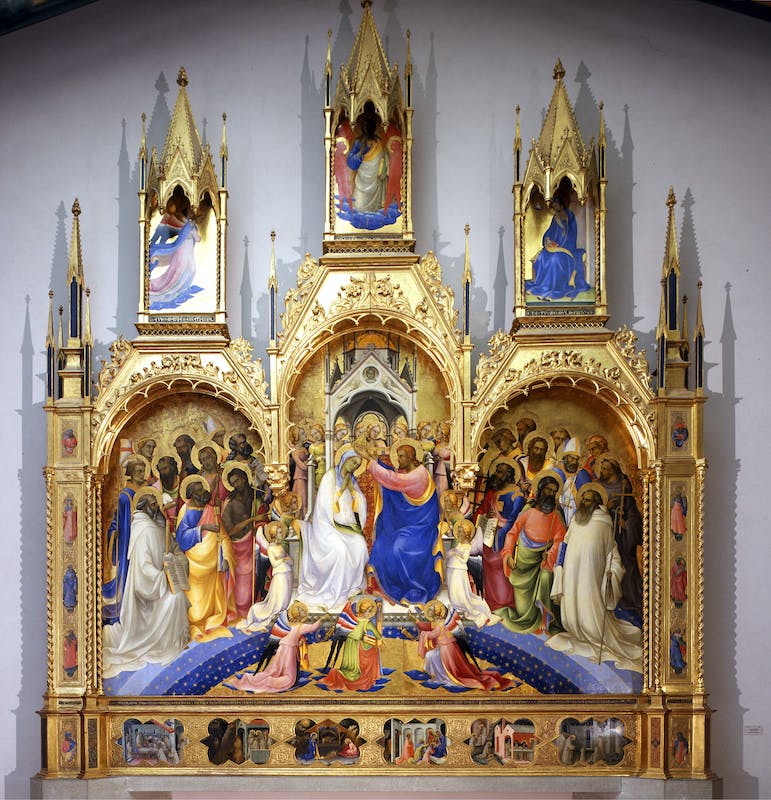 The inscription at the bottom, which was partially restored in the 19th century, shows that the large altarpiece was commissioned by Zanobi di Cecco del Frasca for the high altar of the church at the Camaldolese abbey of Santa Maria degli Angeli in Florence and that it was painted by Don Lorenzo, a monk who lived in the abbey. The date on the inscription, February 1413, corresponds, according to our current calendar, to February 1414, since it was until the 18th century that the year  in Florence began on 25 March, the feast of the Annunciation.

The altarpiece is large in size, rich in composition and sumptuously decorated. Christ and the Virgin are seated on a throne, while the son crowns Mary before angels and numerous saints, kneeling at the sides of the painting. These include, dressed in the white robes of the Camaldolese order, St Benedict, on the left, and Saint Romuald on the right, respectively, the founder of Western monasticism and of the Camaldolese order. The scene, which is a single one, in spite of the three-part form of the altarpiece, is set above a starry rainbow, the symbolic depiction of the celestial spheres that formed the universe, according to Mediaeval cosmology.

Inside the pinnacles above the main scene is the Annuciantion, with God the Father in the centre, while at the bottom, the predella, with mixtilinear tiles that are typical of Gothic decorations, shows the Nativity of Jesus and the Adoration of the Magi in the centre, and four episodes of the life of St Benedict at the sides.

A leading exponent of Late Gothic painting in Florence, as well as being very well known as a miniature artist, Lorenzo Monaco was able to place his personal figurative language at the service of Calmaldolese spirituality, bringing out the full sense of transcendence as expressed in the intense, thoughtful faces of the saints present at this holy event, thanks to the slender shapes of the bodies and sophisticated linear intervals of the clothing.