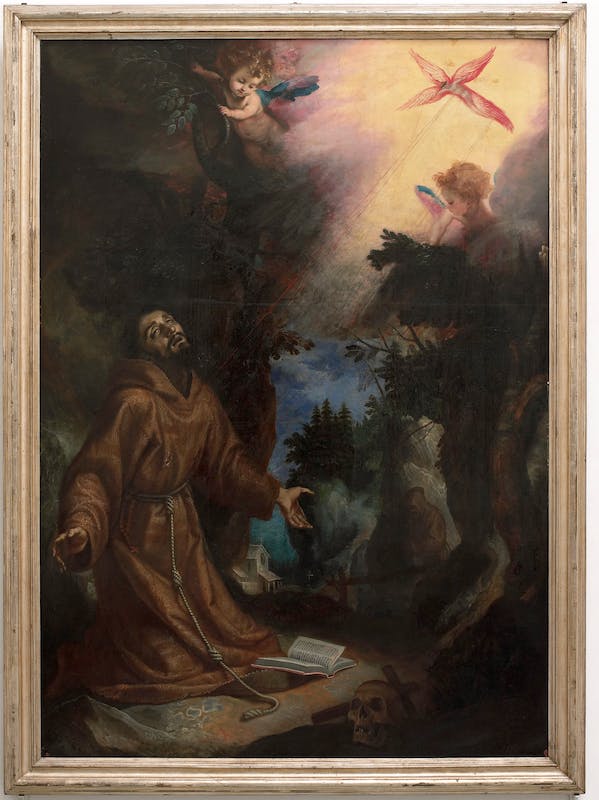 The episode of the Stigmata of St Francis is a hugely significant event in the life of the Saint and the history of the Church.
The panel appears to faithfully portray the story established by San Bonaventura in the Legenda maior: Francis, having passed the night praying on the steep side of the mountain of La Verna, saw a seraph with six bright, fiery wings, among which a crucified man appeared: he was bowled over by a mixture of amazement, joy and pain. Amazement and happiness because he felt Christ looking at him, pain because he could see him suffering on the cross, until the revelation that he himself from that moment on, would be a “visible portrait of Jesus Christ Crucified”, bearing the same wounds impressed on his own body. The supreme spiritual experience is presented by Cigoli in the saint’s face, almost transfigured by a painful ecstasy: according to the legend related by Filippo Baldinucci (Cecchi, 1992, pp. 93-94 and bibl.) the painter recognized the devoted, honest face he wanted to give the saint in the features of a begging, needy pilgrim and used him as a model; once he had gone away, the man was never seen again. The beam of light coming from the seraph in the top right throws bright highlights onto St Francis’ rough, poor habit, illuminating the saint’s face and hands, the bare rock on which he is kneeling and the fallen book; in the shadows, a skull and a cross are faintly visible. Behind the saint, a tall, dark rock is visible, while in front of him other cliffs, overlooked by trees swaying in the wind reveal ravines and caves, in one of which the saint’s faithful companion appears, Brother Leo. At the end of the gorge, we catch a glimpse of the Basilica of La Verna, with its colonnade at the front and a lower building alongside it.  The setting is painted clearly and precisely, as is the vivid flash of light surrounding the angel. This matches the accounts of the shepherds and inhabitants of La Verna, who, on that September night in 1224, had attributed it to a fire. The two tender cherubs at the top of the work, painted with a softer, more mellow coloring, add a touch of Baroque loveliness to the otherwise dramatic scene, and appear to follow the beam of light that cuts diagonally across the panel, joining the wounds of Christ to those of the saint who would become his own “perfect” image.

The panel with the Stigmata of St Francis, which came from the convent of Sant’Onofrio or that of Fuligno, is signed and dated 1596 and is one of the most beautiful examples of Cigoli’s mature style. In the 1590s, the painter, student of Alessandro Allori, who had taught him the importance of drawing, technique, and the study of anatomy, had begun to experiment with the new artistic trends that met the needs of the Counter-Reformation, using color and light to enhance the dramatic effect, realism and beauty of the work. He based this research above all on the works of Santi di Tito and Barocci.