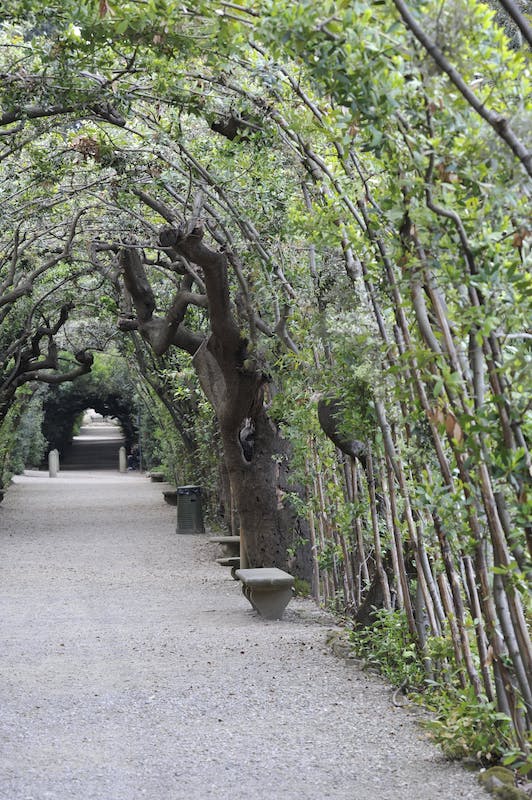 Visitors walking along the Viale dei Cipressi (Cypress Lane) cannot fail to be attracted by the beauty of the large and small pathways, with their tree branches archways, interspersed by evergreen shrubs. These are the Great and Small “Cerchiate”, structures first created in 1612, when the large-scale excavation works were begun to create the “Viale dei cipressi", “Labirinti”, “Ragnaie” and “Cerchiate”. Originally, the purpose of the Gardens was partly agricultural and partly as hunting grounds. This place that today serves to provide silence, shade and beauty for visitors, was once used as a shelter for plants. This is why the main structure of the Cerchiate, formed by holm oaks, woven together and curved to create an archway, interspersed by laurel, viburnum, and privet, set out to create a protective barrier for the plants stored there. The "Cerchiata Grande" (Great Branch Archway) covers the gardens from west to east, and is only interrupted in the point at which it meets the Viale dei Cipressi, resuming immediately after, emerging in Viale dei Mostaccini, once the point at which the three large Ragnaie paths came to an end. The "Cerchiate Piccole" (Small Branch Archways), on the other hand, accompany the whole length of the Viale dei Cipressi, on its left and right, making it possible for visitors to encounter the small animals and birds living in the gardens, including squirrels, robins and blackbirds.