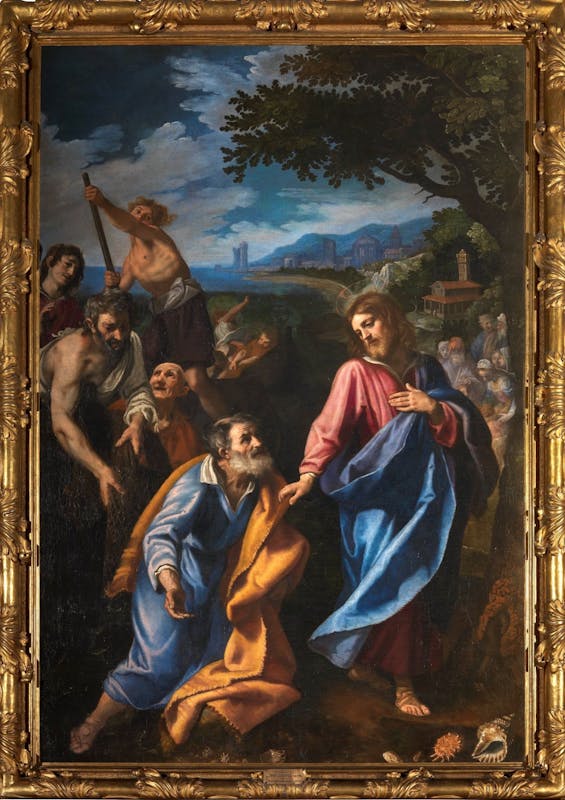 The scene shows Jesus meeting the two fishermen, Simon and Andrew, on the shores of Lake Tiberias, and the invitation to them to leave everything behind and follow him on his path.  This is a central episode in the general picture narrated in the Gospel, as not only does it represent the start of Jesus’ life as a preacher, but it is also the foundation for the future history of Christianity.  Simon and Andrew would in fact be destined to continue Jesus’ work, after the tragic epilogue to his life here on Earth. This is true for Simon in particular, since from the moment of his first meeting with Jesus, he will be known as Peter, receiving the mission to found the future church of Rome.  The essence of this solemn passage is shown in this composition with an extremely clear narrative: the organised layout of the figures allows the onlooker to clearly identify the moment and to capture, first and foremost, the intense effect of the looks between the master and his disciple, which reveals both the revolutionary request from Jesus and the firm affirmative response from the simple fisherman, ready to become a “fisher of souls”.  This work was painted in 1607 for nobleman Niccolò Carducci, agent of the Grand Duke Ferdinand I in Livorno, and destined for the chapel in the cathedral of that city. The canvas, with its softly shaded blues and pinks, built around a solemn subject combining both the impression of naturalism found in Caravaggio, and the monumental style of the great Tuscan and Roman art works of the 16th century, such as Andrea del Sarto and Raphael on one hand and Carracci on the other, is one of the most stunning works by the artist and also one of his last, since he died in 1608. Niccolò Carducci, who had decorated the chapel under the advice of Grand Duke Ferdinand, gave the Grand Duchess, Christina of Lorraine, and it results as being hung in her rooms in Pitti twenty years after it was painted, in 1628. Since then, the Calling of Peter and Andrew has never left Pitti. It was placed in the Hall of Venus when the museum was opened to the public in 1828.

In 1660, Pietro Fevere created a tapestry from this painting, which today is kept in the Tapestry storage, in Pitti Palace.