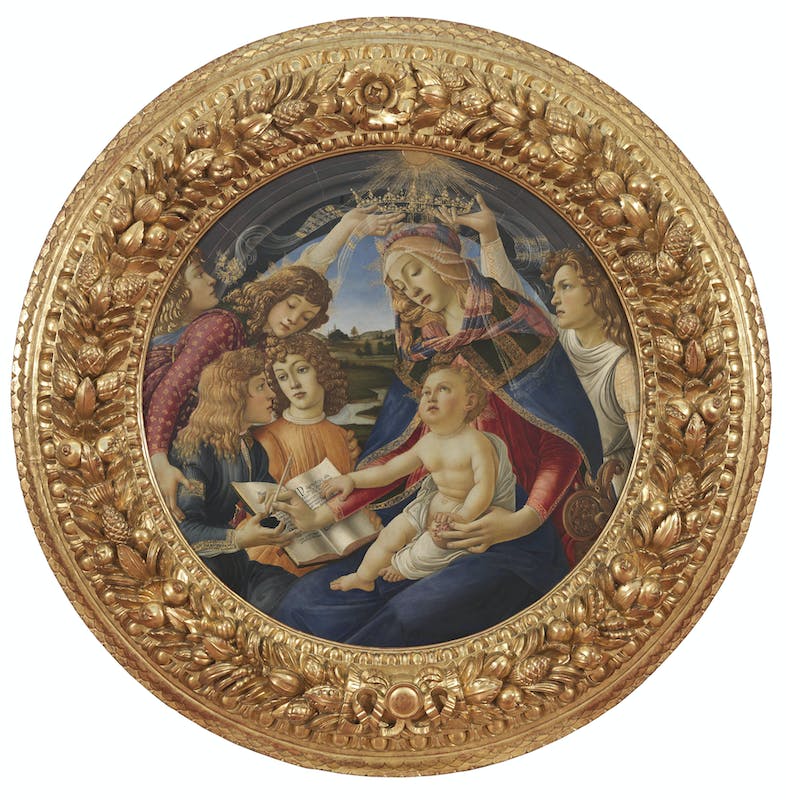 The Virgin Mary, crowned by two angels, is depicted on a throne. Under the guidance of her son, she is writing the canticle “Magnificat anima mea Dominum” (My soul doth magnify the Lord), which gives the painting its title. Jesus is sitting in his mother’s lap. He is touching a pomegranate, a fruit with many symbolic meanings, and whose red seeds recall the blood shed by Jesus to save humankind. The scene takes place before a window that opens out onto a bright, peaceful country landscape; above, the Serena stone frame creates a division between the kingdom of Heaven and the earth. The religious theme becomes almost temporal in the fashionable, elegant hairstyles of Mary and the angels, who, as in various other works by Botticelli, are without wings. The Virgin’s blonde hair with bright gold finish is covered by transparent veils under a richly decorated maphorion, while the hairstyles and clothing of the angels are based on the fashions followed by the scions of the rich Florentine families of the late 15th century. The originality of the work, together with the sophisticated elegance of the clothing and hair, and the grace of Mary’s engrossed expression, have, over the years, brought renown to the invention of Botticelli, whose figures embody an ideal of beauty that was greatly appreciated during the 20th century.

We don’t know the original destination of the painting, which was purchased from a private collection in 1784. Round paintings were usually destined to the secular world in the Renaissance, and above all to noble homes. They were often commissioned on the occasion of marriages or births. However, in the light of the considerable size of the painting, it may have been hung in one of the tribunals of the Florentine Republic, which were often decorated with holy images.