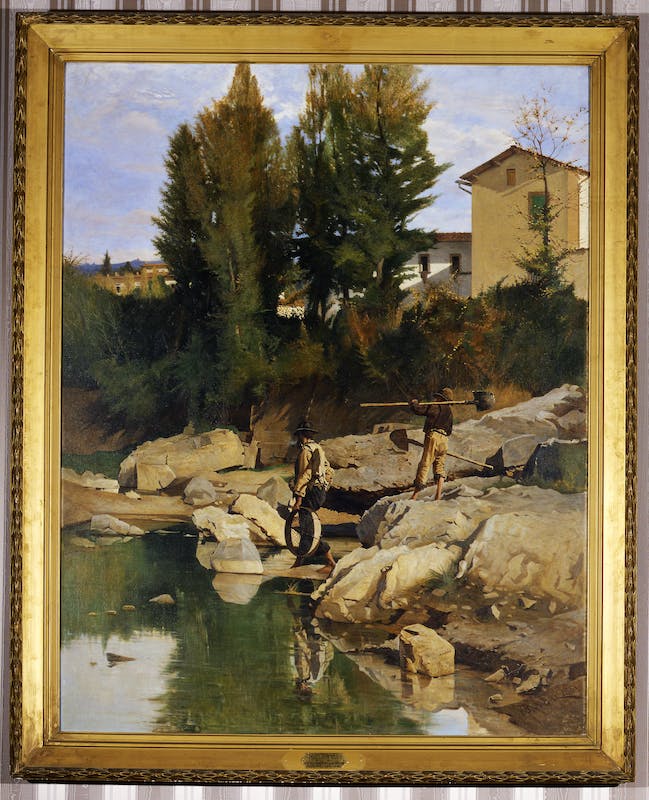 Sand Diggers on the Mugnone

Two sand diggers, one of whom is very young, are preparing to start their daily work along the banks of the river Mugnone. The crystalline light outlines the surfaces of the stones with clear shadows; some cottages are glimpsed in the background, behind the colourful foliage of trees and bushes. The water too, as it flows by slowly, seems to be marking the passing of time.

Borrani adored painting outdoors in the countryside, and he hated the noise of the city. All his works, except his early pieces, focus on subjects that share a common element: silence. The silence of the cloisters in churches, of cultivated fields, river banks, oxen with the plough, the halls of a museum. They capture and suspend a moment in time, also causing the observer stop and think. Borrani uses the Macchaiolo technique to create interplays of light and shadow, convey an emotion and make a fleeting moment eternal.

This painting is an example of Odoardo’s artistic maturity, which was characterised by long preparatory graphic studies before the painting stage, in turn not fully executed en plein air as one might think.

For example, the Department of Prints and Drawings in the Uffizi conserves the rough sketch of the two sand diggers, on which the artists has noted the colours of their clothes and the rocks. In the margin, another note appears: Giovanni Brunetti/Villa Gori, proof that the painting was not an impromptu endeavour, but rather the end product of a carefully thought-out process.

Shy and introverted, Odoardo Borrani was one of the founders of the Macchiaiolo movement, even if he was not as famous as his colleagues. The intimate, meditative mood of his painting fully reflects his personality. Son of a humble painter, he started out as an apprentice in the workshop of Gaetano Bianchi, one of the most active Florentine restorers at the time. In those same years he also attended the Academy of Fine Arts, in 1858 winning the first prize for painting in the three-yearly competition. His early works were related to the historical romanticism current, although, in parallel, he also began experimenting with painting en plein air.

He experienced his greatest inspiration in the years when he kept company with Telemaco Signorini (1835-1901) and Vincenzo Cabianca (1827-1902) at Caffè Michelangelo - the haunting ground of the Macchiaioli - and later in Castiglioncello, on the estate of Diego Martelli (1839-1896), where he fully experimented with the new styles and techniques, permanently abandoning the academic principles. Artistically, his most creative and fruitful years were those of the so-called ‘School of Piagentina’ which he founded in 1863 with his colleagues Raffaello Sernesi (1838-1866), Silvestro Lega (1826-1895) and Giuseppe Abbati (1836-1868).