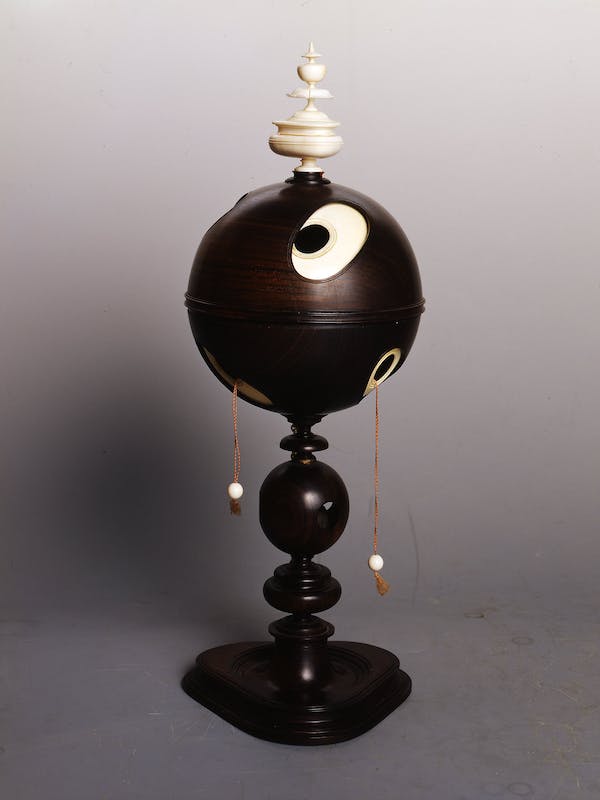 The work is an example of a Ball-Contrefait, a term used in the late 16th century for carved spherical items, set inside other balls, which in turn contain oval-shaped, turned capsules, concealing miniaturised portraits. A letter from 1582 testifies to the fact that the example in the Treasury of the Grand Dukes was donated to Francesco I de’ Medici, Grand Duke of Tuscany, by William V, Duke of Bavaria.

The dominant feature is a large ebony ball with six oval openings, consisting of two semi-circular hemispheres, one of which - the removable one - topped by an ivory tip.   Through the six openings, it is possible to see a second sphere, consisting of a single piece of ivory, standing out in its turn for an equal number of openings. Through this effect created with the openings, it is also possible to see a medallion in ivory, linked to a gold chain, together with miniaturised portraits of William V, Duke of Bavaria, of his wife, Renata of Lorraine, and of their five children. The artifice is also repeated on the ebony stem, with an almost spherical node containing a wooden ball that can be seen through the three circular openings.

The extreme complexity of the device reveals expert craftsmanship by the skilled hands of master craftsmen with excellent familiarity with geometry and mechanics, and it was a source of wonder for its lucky owners. On its arrival in Florence, the globe was immediately listed in the guides of the time as being one of the marvels in the Medici collection and placed in the Tribune of the Uffizi. There was originally a rock crystal coat-of-arms on the ball, with the heraldic emblems of the Duke of Bavaria and the Medici family. This is now lost, although we know it was made by crystal carver, Valentin Drausch. The ebony and ivory parts are the work of Giovanni Ambrogio Maggiore from Milan, using the carving techniques of his brother, along traditional lines dating back to the time of Leonardo, who had rediscovered the art of “intornir gli ovati” [carving ovals].