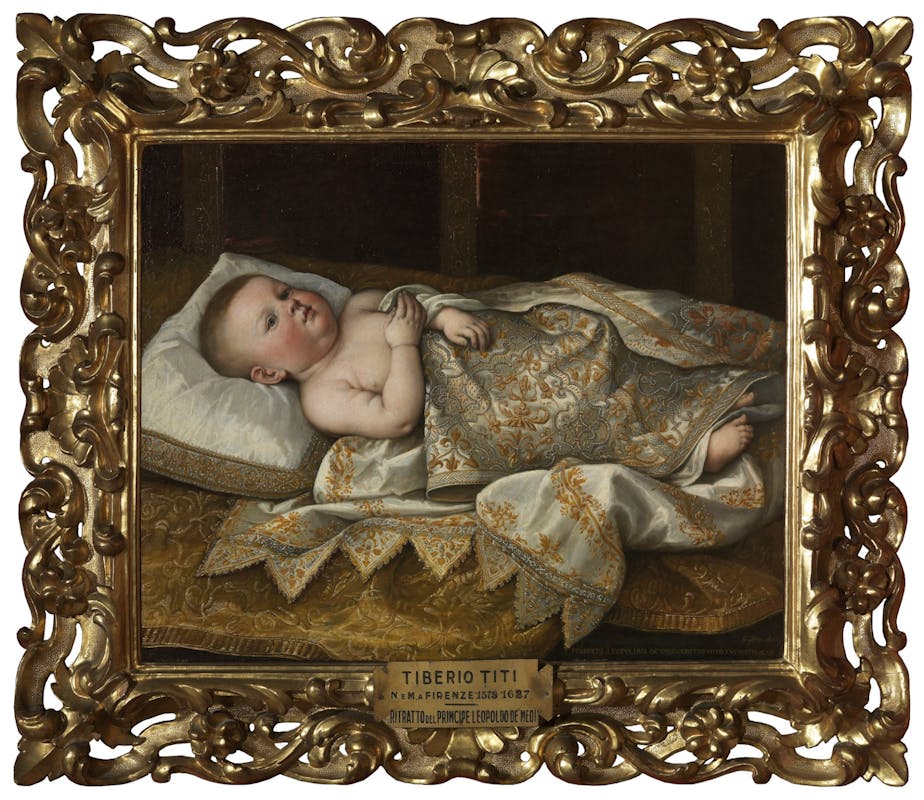 The identity of the child and his date of birth are mentioned in an inscription on the bottom right, “6 9bris (6 November) 1617/princeps leopoldus octavogenitus mediceus austriacus”. Leopold was in fact the eighth child of Cosimo II and Maria Maddalena of Austria, and at the time of the portrait, he would have been about six or seven months old, meaning it is certain that the canvas was painted at Pitti in 1618. The small prince stands out against a background of crimson velvet, wrapped in an embroidered blanket, trimmed with gold, and with his head sunken into a white silk pillow. Although the child’s expression is tender, and in spite of the soft blushing cheeks and a lively, enchanting look, he is shown completely in the style of official portraiture and therefore, the task of this portrait is to show off the rank and wealth of the family. The Medicis, ever mindful of their image as a dynasty, were careful to ensure their infants were portrayed, documenting them at almost every age. Items of this type, shown in different formats, full length or half bust, as well as being part of “series” destined to decorate apartments or representation areas of the palace; they were also sent as gifts to other courts, especially if blood relatives of the grand ducal family.

This painting, previously attributed to Tiberio Titi, brother of Santi and portrait painter to the grand duchy, is actually the work of Veronese, Jacopo Ligozzi, as recorded in several inventories from 1637 until the latter part of the following century. In fact, the meticulousness that goes into the range of fabrics exhibited in the painting, the sensitivity to natural-looking surfaces, still substantially mannerist, are in line with the style of Ligozzi at the end of the second decade of the 1600s.