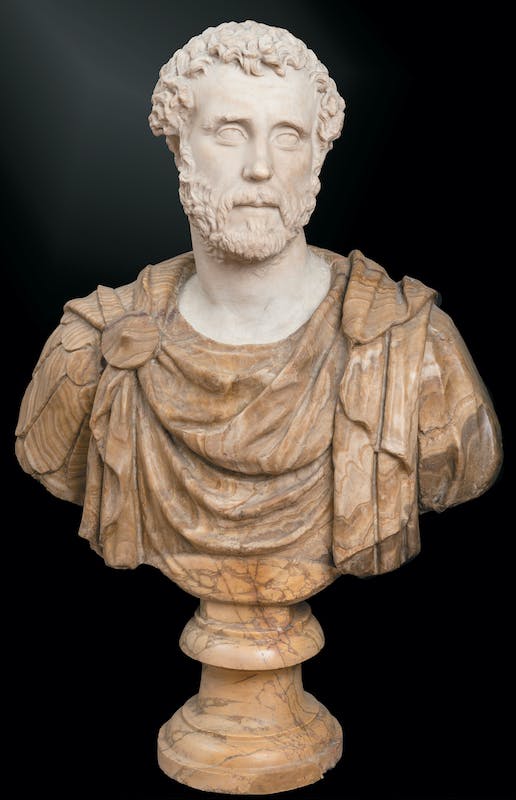 This splendid sculpture depicts Emperor Antoninus Pius (138-161 AD), successor of Hadrian and initiator of the Antonine dynasty. The face portrayed here, characterized by a beard, like that of the subject’s predecessor, and by the marks of time, symbolizing the prince’s wisdom, is captured looking to the left, with a meditative and melancholic expression. The Florentine work can be traced back to the main portrait type of the emperor, which would be reproduced until after his death, the so-called "Formia-Croce Greca 595". Its many replicas differ in the style of the locks on the forehead, with a variation in the "crab claw" or "dovetail” shape. The development of this type can be dated, by comparing it with the iconography used on coins, to the time of Antoninus Pius’ adoption by Hadrian, in February 138 AD. It was extremely popular, more so than the other known portrait type, the "Sala Busti 284" kind, probably created shortly afterwards, in May of the same year, for his accession to the throne.

The obvious uniformity of the official image of this sovereign throughout the more than twenty years of his reign, especially when compared to the eight portrait types associated with his predecessor Hadrian, was evidently an ideological choice. It was a clear symbol of the stability and rigor that appear to be the distinctive stylistic mark of the Principality of Antoninus Pius and that also characterize the public presentation of Empress Faustina the Elder.

Purchased in Rome between 1571 and 1592 by Giulio Gualtieri, the piece was initially located in the Villa Medici and only transferred to Florence in 1787. Recent mineralogical investigations have traced the place of origin of the marble to the quarries of Göktepe (in present-day Turkey), which were extensively exploited from the Hadrianic period onwards. The gusset at the base of the neck and the tip of the nose, as well as the draped bust, in alabastro fiorito, are modern.