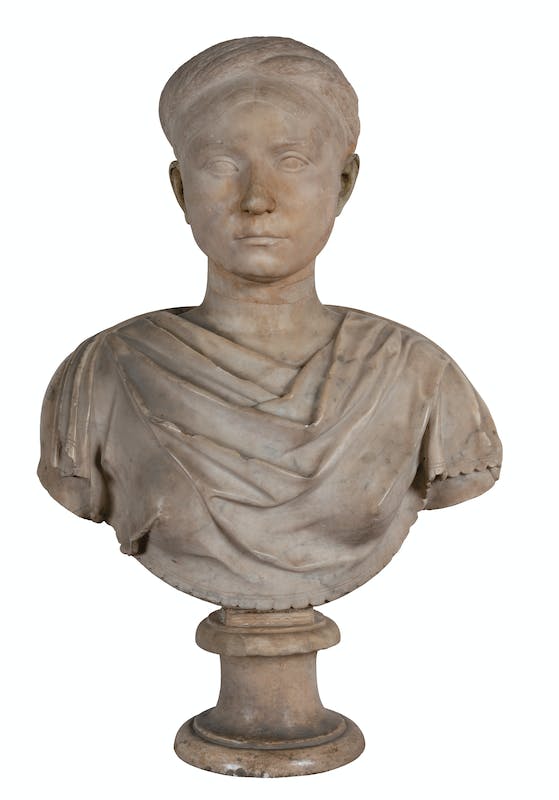 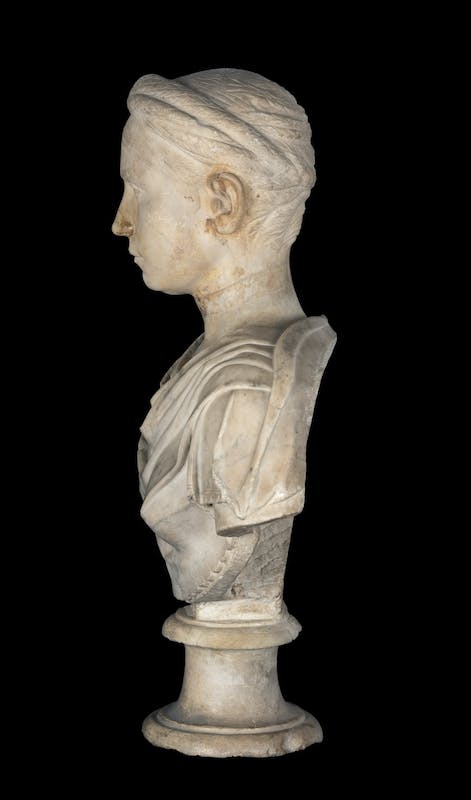 Portrait of an anonymous woman from the age of Hadrian

The work, probably a funerary piece, portrays a Roman lady. The asymmetries encountered in the eye and eyebrow areas suggest that the head was originally inclined towards the right. The forehead and temples are framed by a straight fringe, rendered with sparse, superficial engraved lines, prominent in the center and slightly wavy along the lower edge. Both ears are visible, a half moon-shaped strand of hair hanging down in front of them at each side. The cap is enclosed by a turban made of braids crossing one over the other, while the top of the head appears to have been reworked in modern times, perhaps in an attempt to repair existing damage. At the back, the turban is not puffed up, but sticks to the back of the skull with a complex interplay of overlapping braids. On the nape of the neck, the hair is divided into wavy locks.

The shapes of the braids and the turban recall the images of Matidia Minor and her sister Vibia Sabina, wife of Emperor Hadrian (117-138 AD), the latter in the so-called "Vaison" type, both presented by imperial propaganda as positive examples of compliance with traditional virtues, and of high devotion to the emperor. The sculptor chose to base the anonymous matron depicted here - who was probably not of the highest lineage given the quality of the execution of the portrait - on these models in the only monument that would have eternalized her features and memory: the funerary portrait. In this way, the work becomes a veritable declaration of compliance with the feminine ideals of the time.

The provenance of the sculpture is unknown It entered the collections of the Uffizi Gallery recently, in December 2019, having been purchased in the Pandolfini Auction House in Florence