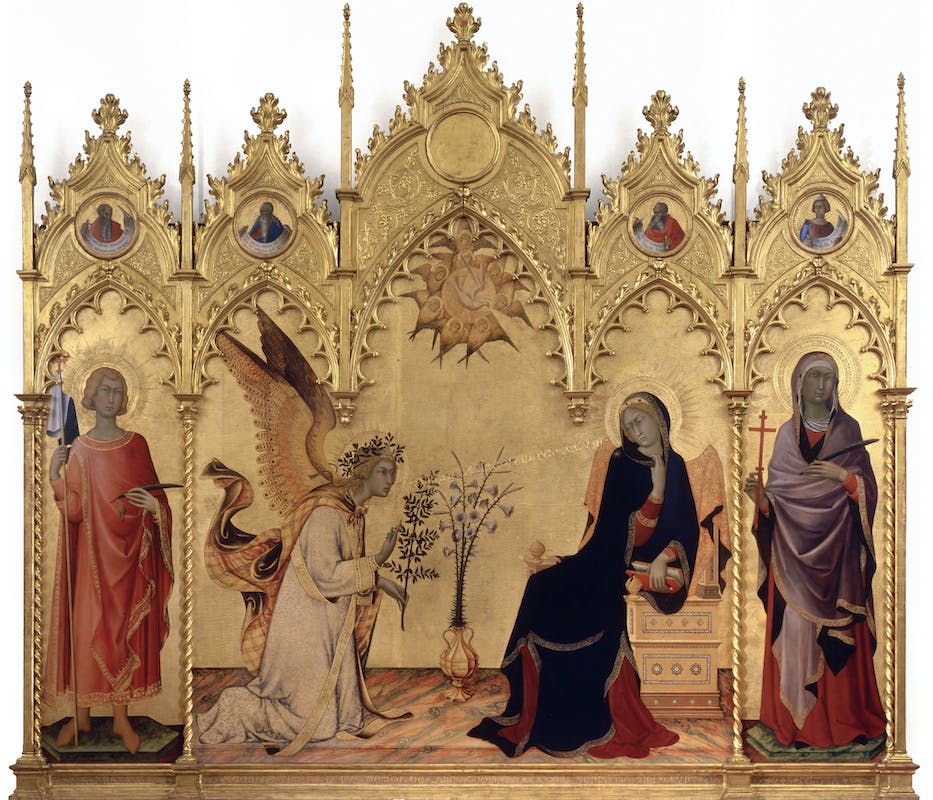 The signed and dated painting was completed for the altar of St. Ansanus in the transept of Siena cathedral, dedicated to the Assumption of the Virgin Mary. In the painting, the Archangel Gabriel appears to the Virgin Mary to tell her of the forthcoming birth of Jesus and greets her with the words shown on the raised inscription on the gold background: “AVE GRATIA PLENA DOMINUS TECUM”. The angel's appearance is sudden, as suggested by the fluttering cloak and spread wings. Mary is distressed, drawing back and wrapping herself in her cloak. The surrounding environment of the scene is not defined, but the few elements which are depicted - the marble floor, the elaborately engraved throne, the precious fabrics, the book that Mary was reading before the celestial apparition - can be traced back to the lifestyle of the wealthiest classes in the fourteenth century.

Above, in the center of the scene, the Holy Spirit is depicted in the form of a dove surrounded by angels, in line with the vase of lilies, a symbol of the Son of God and the purity of the Virgin Mary. The scrolls held by the prophets depicted in the tondos set into the frame allude to the mystery of the incarnation: from the left, Jeremiah, Ezechiel, Isiah and Daniel.

The depictions on either side of the Annunciation show the martyr Ansanus, one of the patron saints of Siena and bearing the banner with the city’s colors, and a holy martyr, possibly Maxima, the mother of Ansanus, or Margaret; the inscription at her feet, which identifies her as Judith, is incorrect.

However, the inscription indicating the two Sienese painters Simone Martini and Lippo Memmi as the altarpiece's creators is original, although art critics tend to attribute most of the conception and execution of this highly detailed painting to Simone, representing as it does one of the greatest masterpieces of fourteenth century painting in Europe. A friend of the poet Francesco Petrarch and commissioned by illustrious clients such as the House of Anjou and the Avignon Papacy, Simone shared a workshop with Lippo Memmi and the two became brothers-in-law when Simone married Memmi’s sister.