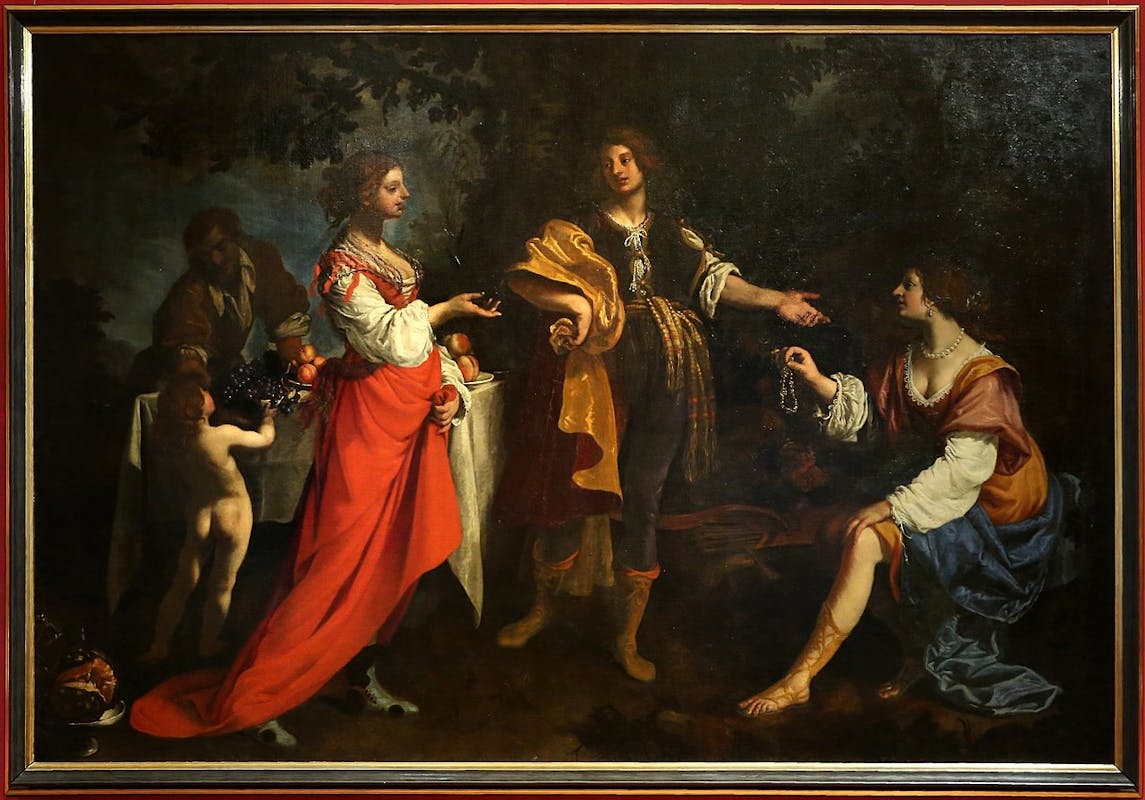 The episode is taken from the Orlando Furioso by Ludovico Ariosto, and it is one not commonly translated to painting form, making this version by Orazio Fidani is one of the most interesting examples. In Canto XIX Ariosto tells of the handsome Saracen soldier, Medoro. Injured in the battle in which King Dardinello and his friend Cloridano were killed, he is sheltered with a family of shepherds and nursed by the beautiful Angelica, with whom he falls in love. The scene shows the moment when a now fit Medoro is about to leave his hosts’ home, together with his beloved. Angelica, sitting on the right, gives her hostess a bracelet: the “armlet, gay with costly gems” that Orlando had given her as a sign of love. When the count, arriving at the shepherd’s house, recognizes the jewel, he finally has proof of the love between the two and from that time, his madness will begin.

The chivalric poems of Ariosto and Tasso were popular subjects, especially in 16th- and 17th-century paintings, both in terms of their literary and mythical content and because of the kaleidoscopic variety of stories lived by the protagonists which were excellent for providing moral interpretations. In Florence in particular, customers were thrilled at the vicissitudes of heroes and heroines, covering the rooms in palaces and suburban villas with canvases depicting stories from Orlando Furioso, Jerusalem Delivered and even Ovid’s Metamorphoses.

The en plein air settings give the scene its pretty rural tone so dear to Florentine painters in the 1630s, impressed by the new themes from Rome that arrived in Florence via the city's artists and by means of works added to the Medici and other noble collections. Also typical of Florentine traditions and of this painter in particular, is the taste for sophisticated formal solutions in the choreography and theatrical pose of the figures, as if imagined on a stage, in elegant costumes with carefully studied colours.