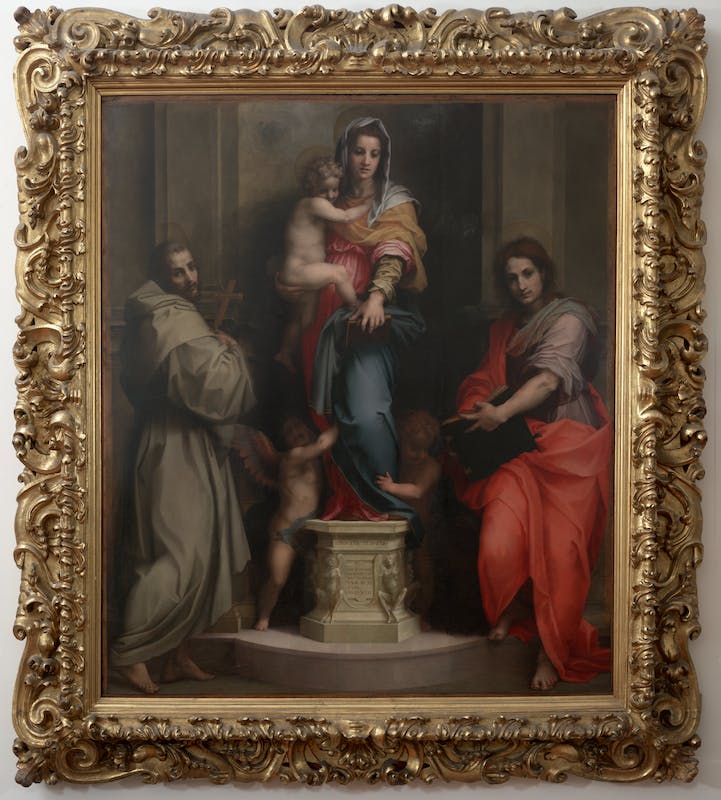 Giorgio Vasari, who frequented Andrea del Sarto’s studio as a young man, defined him as “the flawless painter”. His style, shaped by his studies of the works of Michelangelo and Raphael, and characterised by an exquisitely balanced composition and high level of formal control, strongly influenced 16th Florentine painting, to such an extent that it was considered a precursor of Mannerism.

Del Sarto was commissioned to execute this painting for the nuns of the convent of St Francis de’Macci. Within its solid and meticulous compositional structure, the artist almost seamlessly combines the typical pyramidal shape of the Virgins painted by Raphael with the statuesque feel of the figures created by Michelangelo, mellowing them with the delicate, shaded colours of Da Vinci.

The traditional title of the painting was coined based on Vasari’s identification of the monsters depicted on the Virgin’s pedestal as harpies. However, based on an iconographic interpretation of the work, which assigns an eschatological symbolism to the subject, today critics mostly agree that they depict the locusts described in St John the Evangelist’s Apocalypse. And, in fact, here St John is portrayed beside the Virgin, writing his prophecies. In the ninth chapter of the work, he announces that these monstrous beings, with women’s heads and bellies resembling iron breastplates, are said to have emerged from the well of the abyss in a cloud of smoke, effectively visible on Mary’s right, bringing torment to all human beings who did not bear the tau, God’s seal, on their foreheads. This interpretation could also explain the presence of St Francis in place of San Bonaventura, who had been supposed to feature in the work, as confirmed in the commissioning contract for the painting. And indeed Bonaventura, in his Legenda Maior, identifies in St Francis the angel of the sixth seal prophesied by John. Rising up towards the East, he is believed to have taken with him the salvific symbol of God, the tau, the cross that is the emblem of the Passion of Christ, imprinted on him, in the form of his stigmata. According to this interpretation, the pedestal the Virgin is sitting on represents the well of Hell and the Virgin is closing its mouth.

This complex religious symbolism is thought to have been developed by Antonio di Ludovico Sassolini, the “brother of Santa Croce of the Order of Friars Minor” who, according to Vasari, had commissioned the painting. Sassolini, then Minister of the Conventual Franciscans of Tuscany, had in fact been an avid fan of the sermons of Savonarola and was one of the figures responsible for stoking the climate of religious fervour that reigned in Florence during those early decades of the 16th century.

Joining the Medici collections around 1704, the Madonna of the Harpies was the last altarpiece removed from the churches in Tuscany by Ferdinando de' Medici to increase his own collection of Renaissance and early 17th century masterpieces. In exchange for the painting, which had decorated the main altar of their church for almost two centuries, the nuns of the convent of St Francis de’Macci requested that Ferdinando restore the convent and church. The Grand Prince of Tuscany, who had been eager to obtain the altarpiece by Del Sarto since 1683, willingly accepted their condition, commissioning Giovan Battista Foggini, architect of the Grand Duchy, to complete the task.