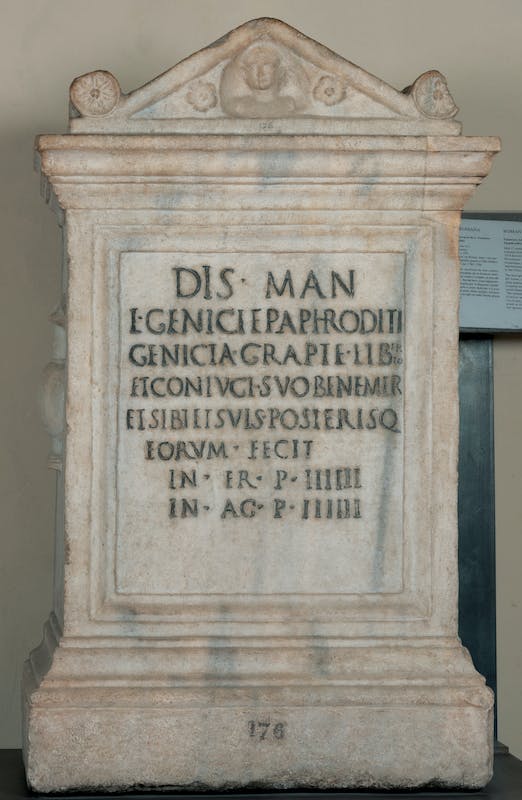 The altar is characterized by a very simple decoration: on the short sides it features the classic urceus and patera, the pitcher and bowl used for funerary rituals, while the focal point is the triangular pediment which houses, in a niche, the bust portrait of the deceased, Lucius Genicius Epaphroditus, commemorated by his wife, Genicia Grapte (CIL VI 19022).

The most interesting part of the funeral monument, however, lies in the text, which shows the special relationship between the couple, since Genicius Epaphroditus had first been Genicia’s slave, before becoming a freedman, and then her husband. This circumstance is so unusual that it is also emphasized graphically, using a solution designed to exclude any possible misinterpretations, since the most common situation was where the bride was her husband’s freedwoman. For this reason, the normal epigraphic abbreviation - LIB - present at the end of line 3 is completed to form the masculine dative - LIBERTO - thanks to the addition of dwarf letters on two lines, in the remaining space up to the frame of the panel, in what appears, given the particular solution adopted, to be an afterthought, added once the dedication had already been engraved. This epigraphic choice appears to capture the pride of the dedicator, Genicia Grapte, probably also a freedwoman, given her cognomen of Greek ancestry, who, having improved her status to the point of then becoming the patron saint of slaves and freedmen, seems to have decided to stick by her choices until the very end, including her decision to marry her freedman. A courageous decision that placed her in contrast with the matronly ideal, a model to which women of all the social strata tended to aspire.

The precise place where the altar was found is unknown; the first mention of it places it in the collection of Pope Julius III, housed in his villa located along Via Flaminia. It then passed to Cardinal Giovanni dei Medici and, after his death in 1562, entered the collection of his brother, Cardinal Ferdinando.