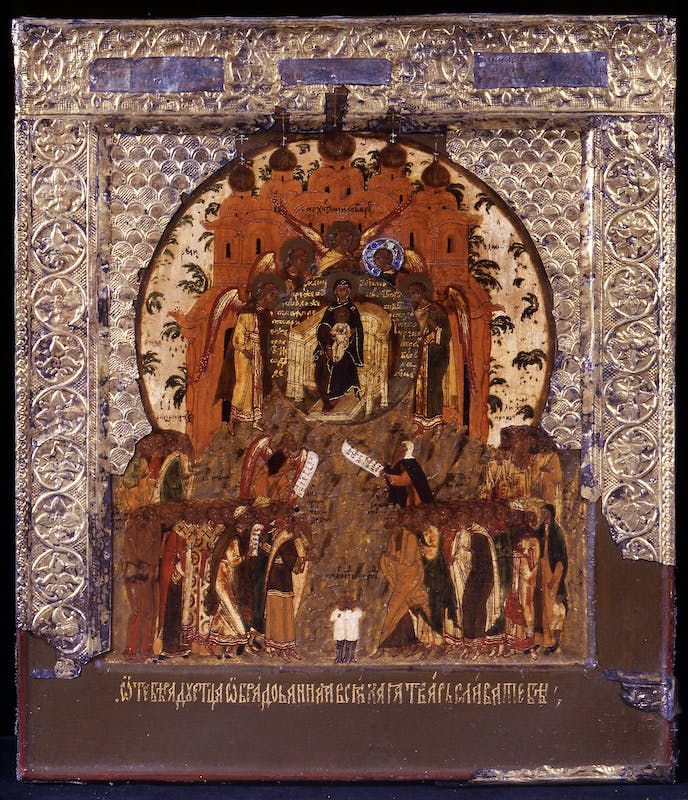 The icon is the figurative transposition of a sacred hymn of the Orthodox Church recited in the Sunday liturgy: “All creatures, the choir of angels and the human race rejoice in You, Mary, full of grace. Sanctified temple and spiritual paradise, glory of virginity, From Your flesh, God made the Child who has been our Lord forever. He made your womb into his throne, making it larger than the heavens. Each creature rejoices in You, Mary full of grace: glory be to You”.

At the centre of the composition, Mary is sitting on a semi-circular throne, surrounded by angels in prayer. She is holding Baby Jesus on her knee, who is issuing a blessing. The scene is set inside a temple, beyond which paradise is visible in the background. The human race is represented by the assembly of the righteous, at the bottom, arranged according to their order of saintliness. They are led by St John the Baptist on the left, holding a phylactery, and by St John of Damascus on the right, considered the author of the sacred hymn “All creatures rejoice in You”.

Although the work is small, the pictorial technique used is very refined. Gold dust enhances the angels’ wings, the leafy branches in the background and some details of the robes. One of the angels’ haloes still bears traces of the original decoration with filigree and enamels. The icon can be attributed to a Muscovite workshop operating in the last quarter of the 16th century. The gilded silver leaf coating (basma) is very similar to that used in the icon with the Beheading of St John the Baptist of the Uffizi (Inv. 1890 no. 9355), the same person probably commissioning this effect and owning both works.

Both the icons belonged to the Medici. There is documentary evidence attesting to their presence in the Chapel of Relics in Palazzo Pitti, in Florence, as early as in 1639.