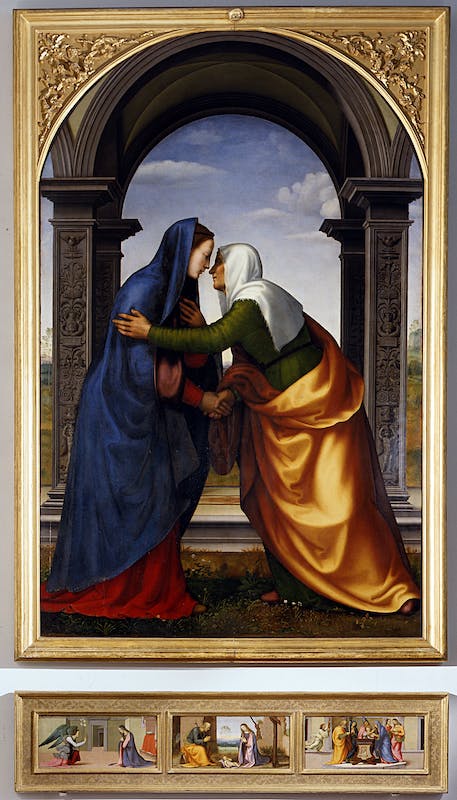 The meeting between Mary and her relative Elizabeth, future mother of John the Baptist, is taking place in the still, ultra-clear atmosphere of a sunny morning. The two women are embracing on a flowery lawn against the backdrop of a wide pietra serena arcade which follows the profile of the panel and rests on pilasters decorated with elegant panoplies amongst which the date 1503 is visible, the year the work was painted.

This is followed in the predella by an Annunciation to the left, a Nativity of Jesus in the middle and a Presentation at the Temple on the right. The painting’s harmonious gestures, the rapt expressions on the faces and the simple, unadorned clothing are indicative of Mariotto's training with Fra Bartolomeo, the friend and companion with whom he teamed up professionally at various intervals in his artistic life. The inspiration for the painting's compositional minimalism and measured emotions is, in fact, the teachings of this Dominican friar. With a temperament much inclined to ‘the things of the world’, as Vasari said, Mariotto was one of the foremost exponents of that renewal of Florentine art which took place in the early 16th century, with its rapid dissemination of the original features prompted by the presence in the city of Leonardo, Michelangelo and, from around 1504, Raphael. It was a time at which painters gave their work a grandiose scenic quality, spatial solemnity and a vibrant rendering of the landscape. It was these qualities which were to mark such a change over the art of the preceding century and lay the foundations for the new developments of the decades to come.

The painting was commissioned for the Oratorio di San Michele Vecchio in Florence, for the altar which, in the first decade of the 16th century, was sponsored by the Congrega della Visitazione. It was later moved to Chiesa di San Michele in Palchetto, where Vasari saw it and described it in his Lives. It joined the Medici-Lorraine collections in 1786 and was shown in the Uffizi gallery.