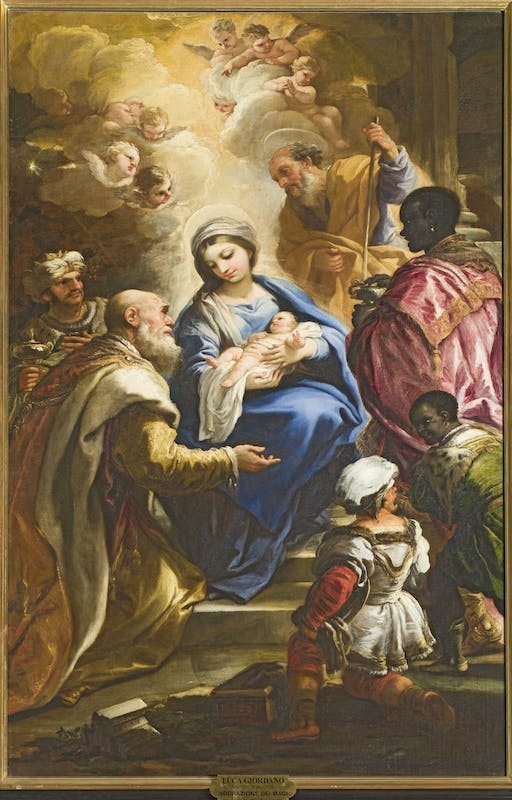 The painting dates back to the period when the artist returned to Naples between his two visits in Florence (1682-1683 and 1685-1686). The original location of the canvas explains its large dimensions and the vertical format: it was indeed conceived to decorate the altar built for the viceroy of Naples, 7th Marchese of Carpio, inside his family chapel. Later, Grand Duke Cosimo III bought it for his own collections.

In the middle of the scene, we can admire the Madonna with the Child and St. Joseph behind her. According to the tradition, he has the appearance of an old, bearded man, while Mary looks very young, nearly an adolescent. Dressed in sumptuous robes, the three wise men gather around them and offer their gifts to Christ.

In the background of a sky illuminated by a golden glow, numerous angels emerge from a whirl of clouds.

The vertical composition involves the observer and gives the painting a strong dynamism and a theatrical effect.

The artist expresses his fascination for the Venetian painting of the 16th century by creating a warm and bright atmosphere and using intense colours for the clothing enhanced by brilliant reflected lights.

In the foreground, dressed according to their contemporary fashion two servants are attending the sacred scene while talking to each other: the one on the right is a young moor, the other on the left is a dwarf, namely typical characters at European courts at that time. Thanks to these two figures, Giordano can introduce the daily life of the period in the painting.

One of the three Magi, Gaspar, portrayed in profile in front of the Virgin, has very characteristic physiognomic features. It is probably a portrait of the patron, whose name was indeed Gaspar.