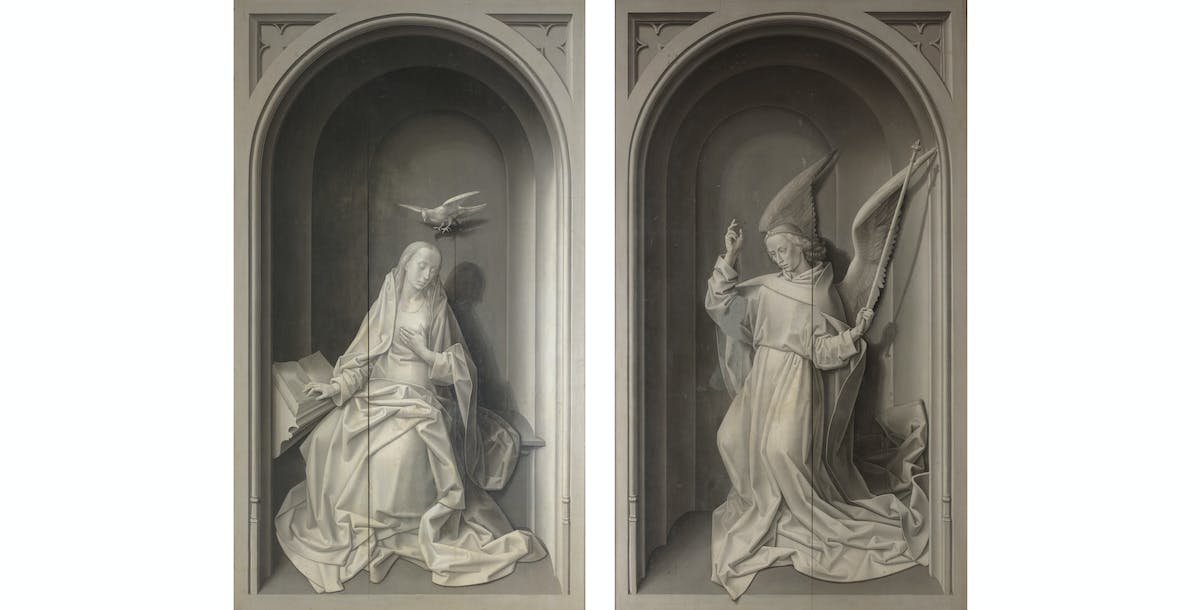 The infant Jesus lies on the ground surrounded by rays of light to signify him as the Light of the world. His mother Mary, father Joseph, various angels and the shepherds stand around him in adoration. In the background, the previous moment in the narrative sequence, when the angel announces the birth of the Saviour, is depicted in the surrounding scenery. The continuity of the background landscape erases the division between the central image and the side panels, where the family who commissioned the work is shown in prayer under the protection of four saints. To the left, Thomas the Apostle and Saint Anthony the Great preside over the head of family Tommaso Portinari and his two sons Antonio and Pigello, while to the right Saint Margaret, victorious on the dragon which had swallowed her, and Mary Magdalen, holding a vial of unguent, stand watch over Maria Baroncelli Portinari and her daughter Margherita. The different proportions of the saints and the members of the family reflect their position in social and religious hierarchy.

Originating from Florence, Tommaso Portinari (1428-1501) lived in Bruges for many years where he worked as a representative of the bank of the Medici family. In 1470 he married Maria Baroncelli, also of Florence; the family is depicted with clothing and hairstyles that reflect the Flemish fashion of the time. During his time in Flanders, Tommaso Portinari commissioned Flemish painter Hugo van der Goes to paint the Adoration of the Shepherds Triptych to adorn the Portinari family chapel in the church of Saint Giles in the Santa Maria Nuova hospital in Florence. The painting's arrival in Florence in 1483, having first reached Pisa by sea, was quite an event; the work was perceived to be extraordinarily innovative in the eyes of the Florentine painters, who particularly praised the realistic likeness of the objects, landscape and facial features. The still life imagery in the central foreground is astonishing and abounds with symbolic references: the white iris and red lily allude to the theme of purity and Jesus’ blood spilled during the Passion of the Christ, the purple columbine represents the sorrow of the Virgin Mary, while the carnations symbolize the Holy Trinity.

When closed, the triptych showed a depiction of the Annunciation, painted in black and white on the verso of the doors.