A fragment of the frame of an altarpiece portrays Christ Redeemer, a half bust, blessing with his right hand and with a phylactery with EGO written on it in his left hand. The round shape of the panel is the result of the support having been reworked. On the back, in the lower half of the circumference, wooden integrations of approximately 4 cm in the lower part and 2 cm at the sides are visible to regularize the shape of the panel. There is a vertical slit where the two boards that form the support meet on a diagonal. The slit has been reinforced with the application of two wooden butterfly inserts. There is another diagonal opening on the pictorial surface on the right side of Christ’s face.

The image reproduced in Procacci’s studio (1928) shows the painting in a modern frame and with a background different from the present one, on which the imprint of a compass with a gold background framing the figure of Christ is clearly visible. The bust of Christ appears to have been built up along the bottom edge to adapt it to the circular shape of the panel. At the time the deep scratch that traverses the garment of Jesus was already evident.

The very impoverished original pictorial surface has a number of gaps and has been repainted at various points, which are more evident around the top of the head of the Redeemer and in the robes. The gold background seems to have been largely redone, but the engraved lines and simple circular patterns of the decoration of the halo shows through.

On the back there are various inscriptions regarding the collections it has been part of.

The oldest, prior to the restoration of the wood, is the number 103 (or 193) painted in the centre with a brush, partially damaged by the positioning of the wooden butterflies; just below an X 7 is visible. On the original support 1371 A / SD I DB (?) is written in pencil, and BHI-to 978.59 is written on the restored wooden wedges. In addition, on the lower part of the portion of new wood, there is an illegible ink stamp and the number 10709 (?).

According to most studies (Perkins 1937, p. 386; Ferretti 1993; Weppelmann 2011, p. 139 cat. 18), before leaving Italy at the end of the 1920s the painting was in Florence, part of the antiquarian Ventura’s collection. However, Procacci (1928), in the article that made the painting known, stated that it was part of the Volterra collection in Florence. It then went to the Ehrich Galleries in New York before 1930 (Zeri Photographic Archive, card 1785) and was sold at auction in New York to the American Art Association in 1934 (Important Paintings 1934, p. 3 cat. 7). On the basis of that indicated in the archive of the Frick Art Library (FARL 704-B), the opera then passed to the Colsmann collection (Weppelmann 2011). After which all trace of the painting was lost until it reappeared again for sale at Sotheby's in New York in 1979 (Important old master paintings 1979, cat. 250). It came to Italy to the Stefano Ferrario collection at Borsano, Varese (Ferretti 1993), was sold by Finarte in Milan on 13 December 1989 (Dipinti antichi 1989, cat. 138) to become part of the antiquarian Riccardo Gallino’s collection, Torino (Ferretti 1993), where it still was in 2003 (Weppelmann 2011, p. 139 cat. 18). Purchased from Blue Art Limited of London, it was presented to the Florence Export Office on 6 August 2012 and bought by the Italian government for the Uffizi Gallery with Ministerial Decree no. 24410 of 10 September 2012.

For the theories on its original location, see the criticisms.

The painting was made known by Ugo Procacci (1928, p. 42) with its attribution to Spinello Aretino. This has never been contested by subsequent studies. However, the studies concentrated on the problem of its origins: an altarpiece where the panel of the Redeemer Blessing would have been inserted – by merit of its size, shape and subject – in the central cusp if it had been part of a polyptych. Procacci suggested it could be the top of the altarpiece seen by Giorgio Vasari, mid-16th century, in the church of Monte Oliveto Maggiore (Asciano, Siena), which included the panels with the Coronation of the Virgin and the Passing of the Virgin of the Pinacoteca Nazionale at Siena (nos.119, 125), as well as the sides with the Saints Nemesio and John the Baptist and Saints Benedict and Lucilla in the National Museum of Budapest (inv. 36) and the Fogg Art Museum in Cambridge, Harvard University (inv. 1915.12 a-b) respectively. According to a reconstruction of Procacci’s documentation, it is the sumptuous altarpiece commissioned in 1384 in Lucca to Spinello Aretino, the Florentine carpenter Simone Cini and the gilder from Siena Gabriello Saracini for the Church of the Olivetan Benedictine monks of Santa Maria Nova in Rome, later arrived at the headquarters of the order at Monte Oliveto, where Vasari saw it thus transcribing the names of the three authors and the date of completion, 1385 (G. Vasari, Le vite. Edizione Giuntina e Torrentininana, http://vasari.sns.it, pp. 281, 285; for an update of events, Weppelmann 2011, pp. 50-51, 143-158, 374-377 documentary appendix no.7).

The connection of the Christ Blessing with the polyptych from Monte Oliveto, was taken up by Boskovits (Boskovits 1975, p. 439), Damiani (G. Damiani in Il Gotico a Siena 1982, p. 302), Natale (Natale 1991, p. 250), while Fehm (Fehm 1973, p. 265) reserved judgement and Calderoni Masetti (Calderoni Masetti 1973, pp. 13 nota 16, 15) rejected it, holding that the fragment was produced before 1384. Some concern was expressed by Torriti (Torriti 1980 p. 232) and Ferretti (1993), who, while agreeing on the dating circa 1384–1385, considered the trefoil to be too big for The Coronation of the Virgin of the Siena Pinacoteca (width at the base cm 59, height cm 112) and took into account the hypothesis that the Redeemer could have been part of another polyptych, for example the one composed of the Madonna and Child Enthroned in a private Mexican collection and the saints Philip and Chrysanthus, Daria and James in the Pinacoteca Nazionale in Parma (inv. 454, 457), perhaps from the church of Saint Simon and Saint Jude at Lucca. Ferretti’s proposal was accepted by Silvia Giorgi (in Galleria Nazionale di Parma 1997, p. 52) but rejected by Tartuferi (in Sumptuosa Tabula Picta 1998, p. 138) who considered the panel with Christ Blessing to be slightly later than the polyptych of the church of Saint Simon and Saint Jude, which he dated as circa 1380. Gonzàlez Palacios (Gonzàlez Palacios 1998, p.19) also expressed caution. He thought that the roundel could have been part either of the Monte Oliveto polyptych or of the dismembered altarpiece painted by Spinello before 1384 for the Church of San Ponziano at Lucca (Fogg Art Museum in Cambridge, Harvard University, inv. 1917.3, the Hermitage in St Petersburg, inv. 272, 275 and the National Gallery of Parma, inv. 452, 439, 430).

Weppelmann (Weppelmann 2011, p. 139 cat. 18), who considers it to be difficult to say what its origins were, emphasizes the affinity with a group of paintings with figures of saints already belonging, in his opinion, to the sides of the polyptych of San Ponziano at Lucca, in which the scholar observes the same fine hatching technique and the same way of outlining the cloaks with a double line of gold. The comparison, which moves the debate on to the still open issue of the reconstruction of the frames of Spinello’s polyptychs at Lucca, appears to be convincing especially as regards the three small Holy Apostles in the Shoeri collection in Zurich (Weppelmann 2011, pp. 137-138), even if the connection with the triptych of San Ponziano remains entirely hypothetical. With regard to it allegedly belonging of the Redeemer to the Monte Oliveto polyptych, it should be noted that the prophets who crown the panels – now in Budapest and Cambridge – are inserted in quatrefoils, not trefoils (but the panel of Christ Blessing has been tampered with considerably), and the perimeter is delimited by a patterned band of which there is no trace in the background of Christ Redeemer. Therefore, the caution expressed by Weppelmann in attempting to locate the origin of the painting is acceptable. On the other hand it could also be inserted into a context different from the Marian image at the centre of a polyptych, such as the Spinello Aretino school panel attests with Saint Anthony Abbot Enthroned at Providence, Museum of Art, the Rhode Island School of Design, cat. 16.423, crowned by a trefoil with the Redeemer (Weppelmann 2011, pp. 161-162). 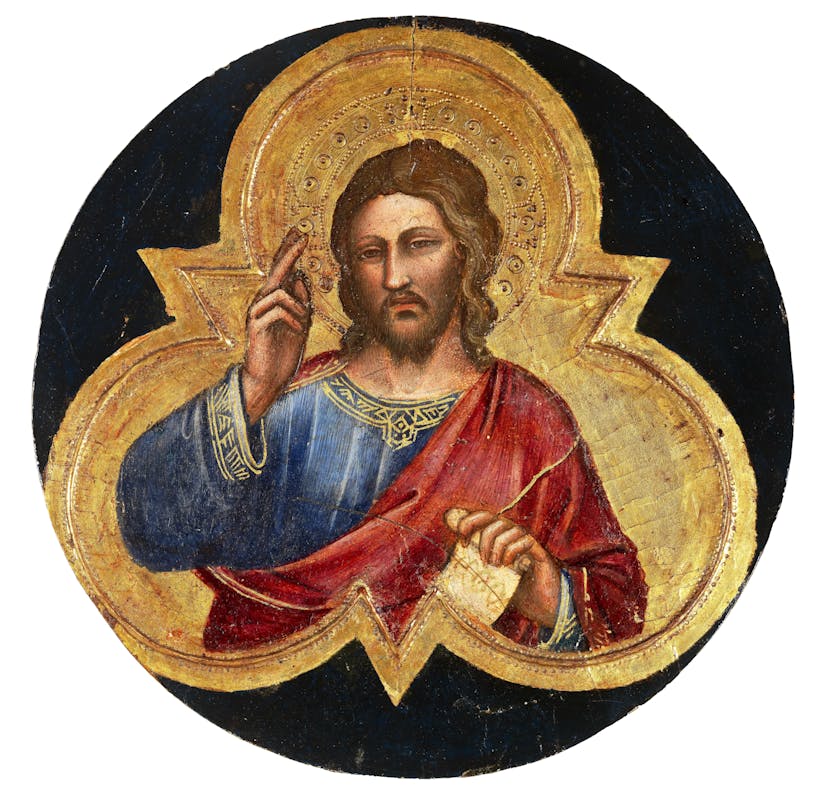 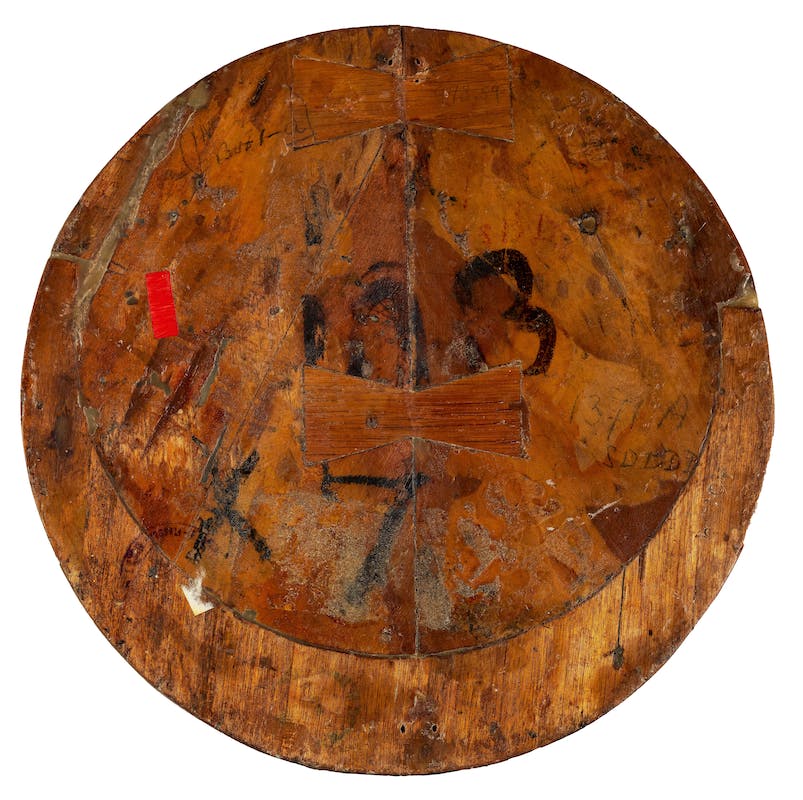 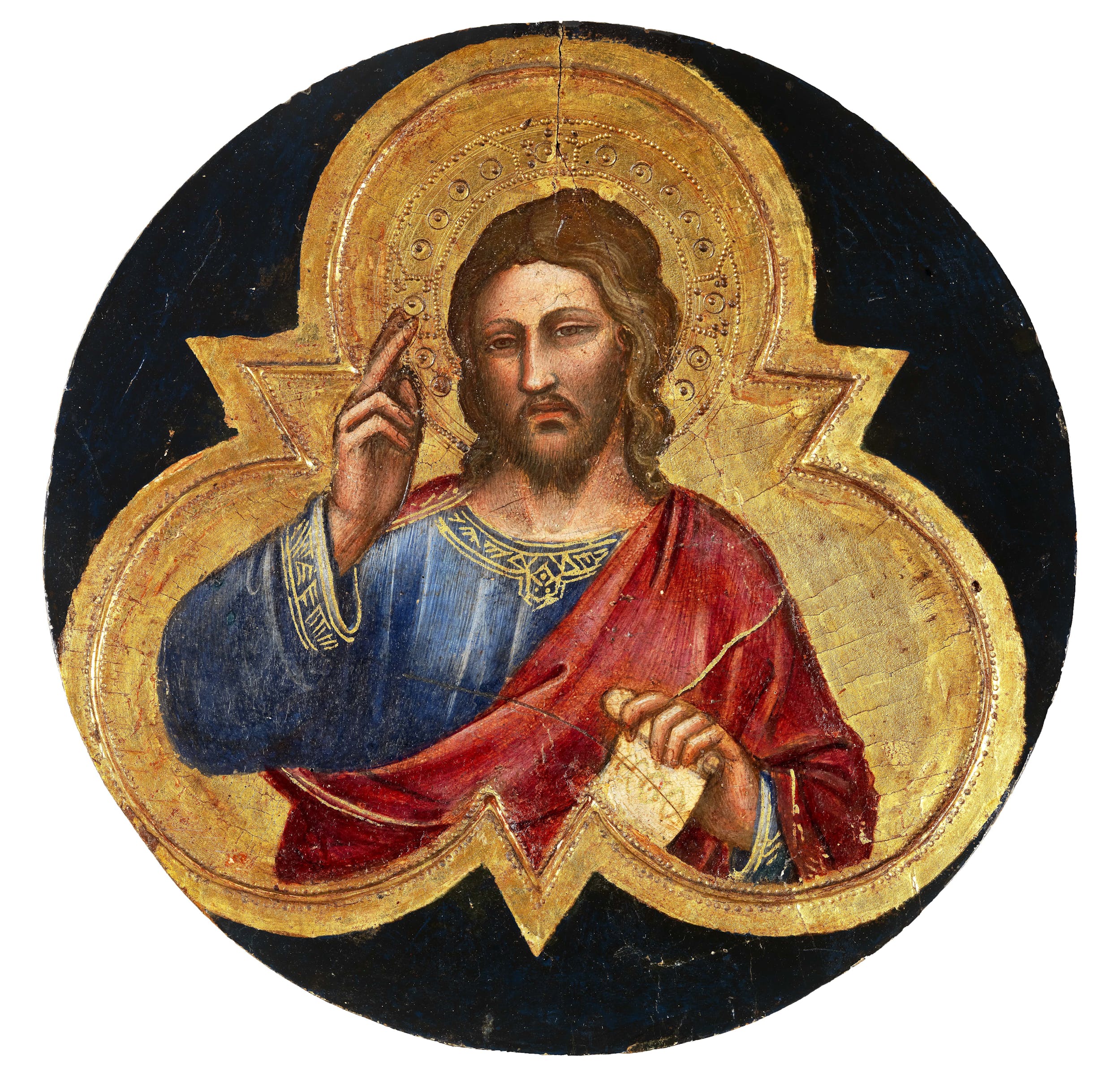 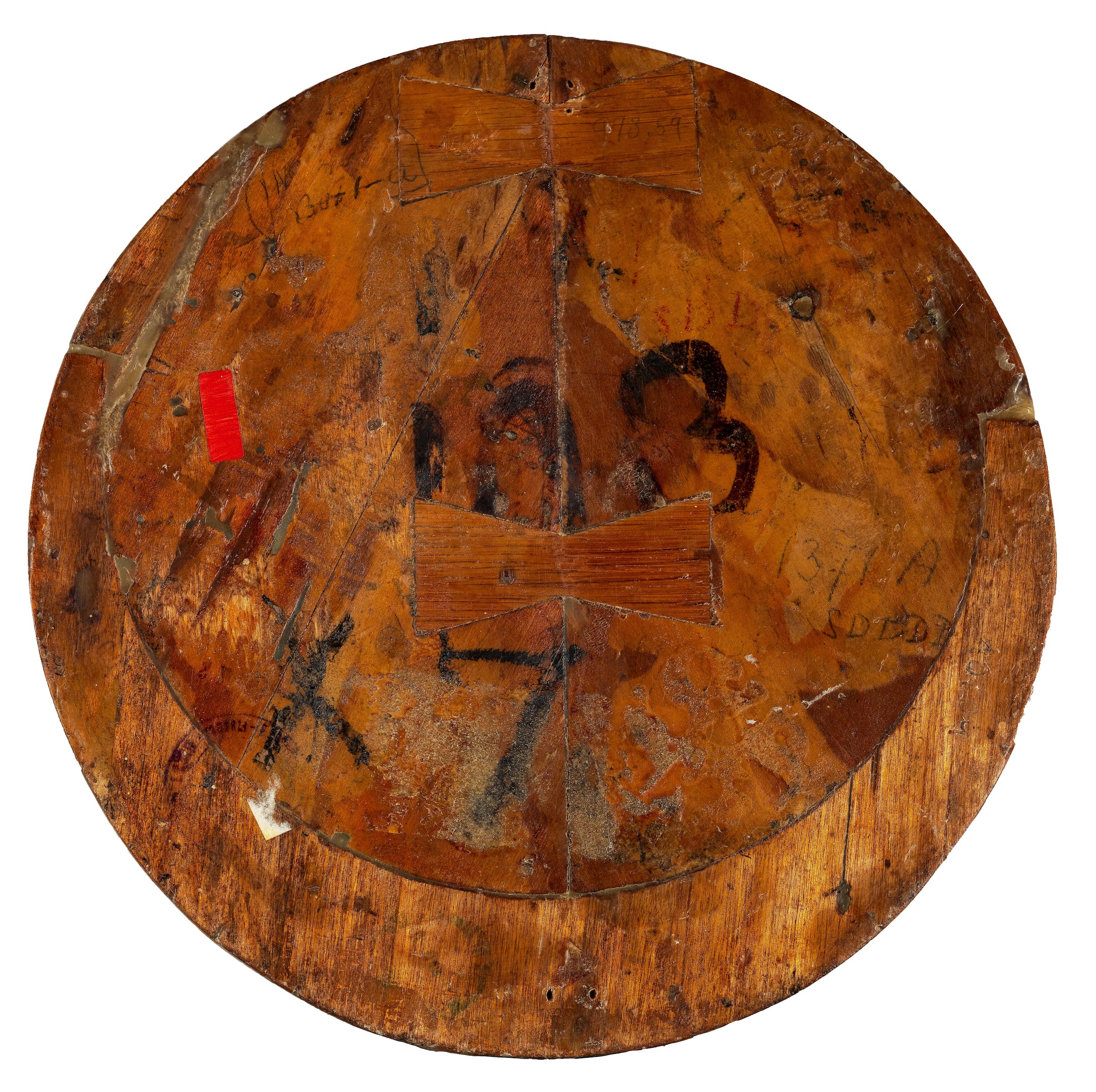