Three new artworks are part of the heritage of the Uffizi Galleries. These are the Count Ugolino by Fra’ Arsenio Mascagni, a subject taken from the Divine Comedy which was rarely depicted before the 19th century, the Caravaggesque Liberation of Saint Peter from prison by the Bolognese artist Leonello Spada (active in Emilia, as well as in Rome, Naples and Malta), and the Sicilian countryside on a rainy day by the Sicilian painter Francesco Lojacono, of which the Galleries have never owned any work so far. The arrival of the three paintings is the result of the generosity of the American branch of the ‘Amici degli Uffizi’, the Friends of the Uffizi Gallery, which have recently purchased them on the market to donate them to the Galleries.

Besides the beauty of the painting, the value of the work is given by the rarity of the subject for the time. Since the Middle Ages, in fact, a large number of illustrations of the Divine Comedy on illuminated manuscripts or on paper are known (the Uffizi own the splendid series dedicated to it with 88 sheets designed by Federico Zuccari in the 1580s), while up to the 19th century the representations in painting or sculpture of Dante’s episodes are a real rarity. Also for this reason, the painting by Mascagni is exhibited at the Uffizi Galleries (from today until January 9) in the Niobe Room: the excruciating agony of Ugolino della Gherardesca and his sons, on the verge of starving to death, is perfectly reflected in the tragic expressiveness of the scultpural group of the Niobids, children of Niobe and Tantalus, who, according to the Greek legend, were mercilessly exterminated one by one by Apollo and Artemis to punish their mother’s haughtiness.

In the painting, the old Saint Peter is accompanied by an angel who seems to emanate light: the two figures in dialogue, the old man and the young one supporting him, occupy the entire scene in a dramatic chairoscuro, clearly derived from Caravaggio. Symbol of good, the angel wears a coral-coloured satin garment with white and gold sleeves: the painter seems to refer back to Lombard models among which the Brescian Gerolamo Savoldo, whom Caravaggio himself was inspired by.

It is a sketch for the canvas “After the rain” held at the Banco di Sicilia and Palermo Foundation. The landscape with vibrant brushstrokes offers the observer a sensory experience: the humidity of the soil, the clear air, the silver light, fragments of the sky reflecting in the water holes. It is a precious acquisition for the Uffizi, whose collections were lacking a work by Lojacono. 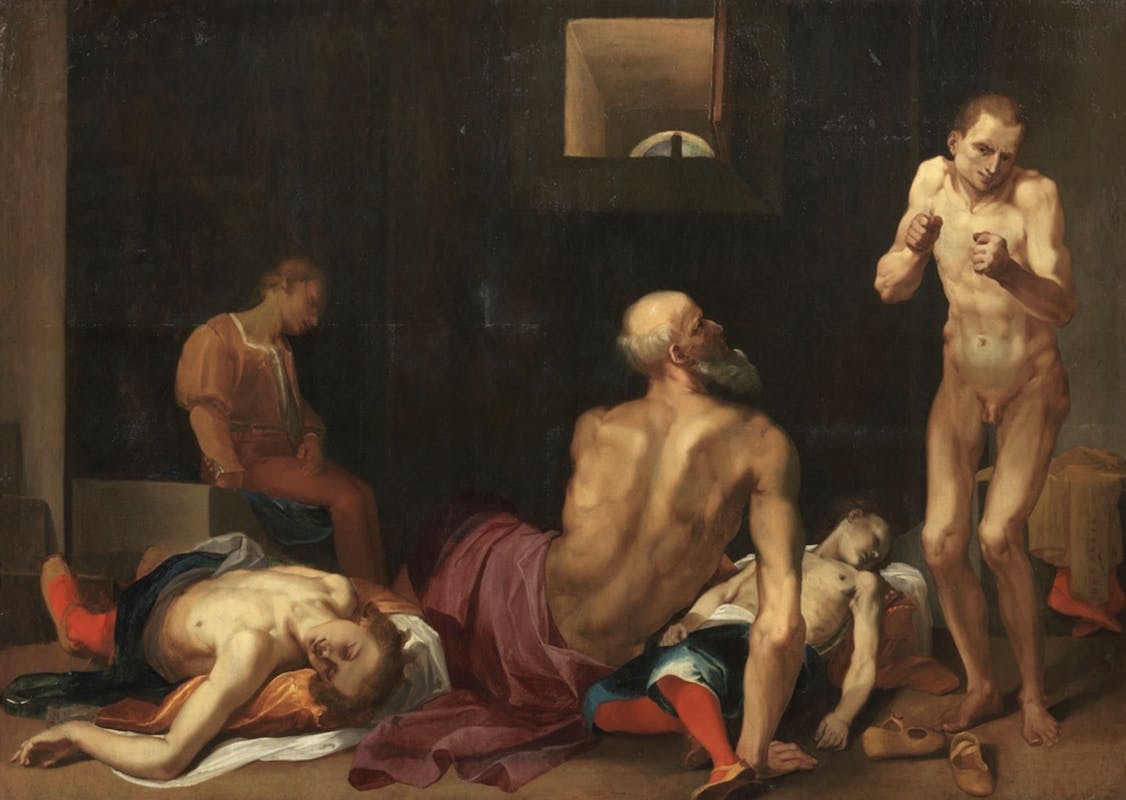 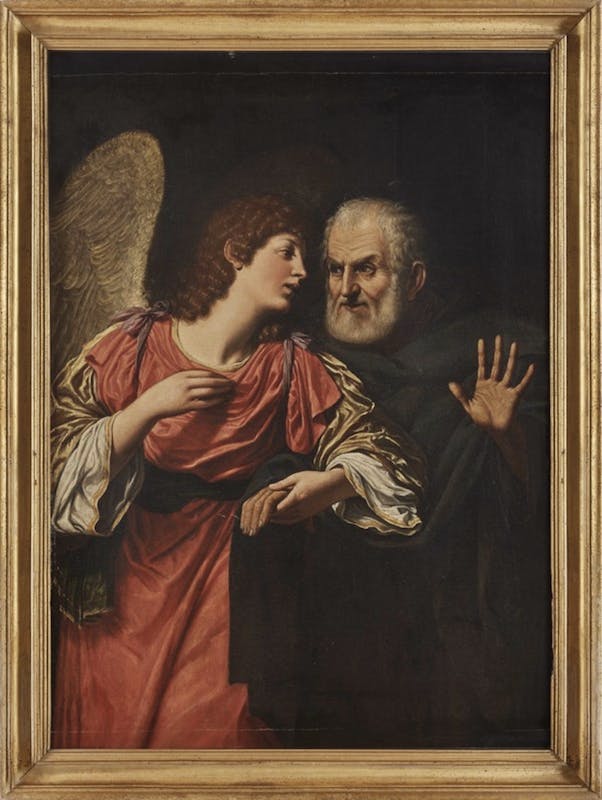 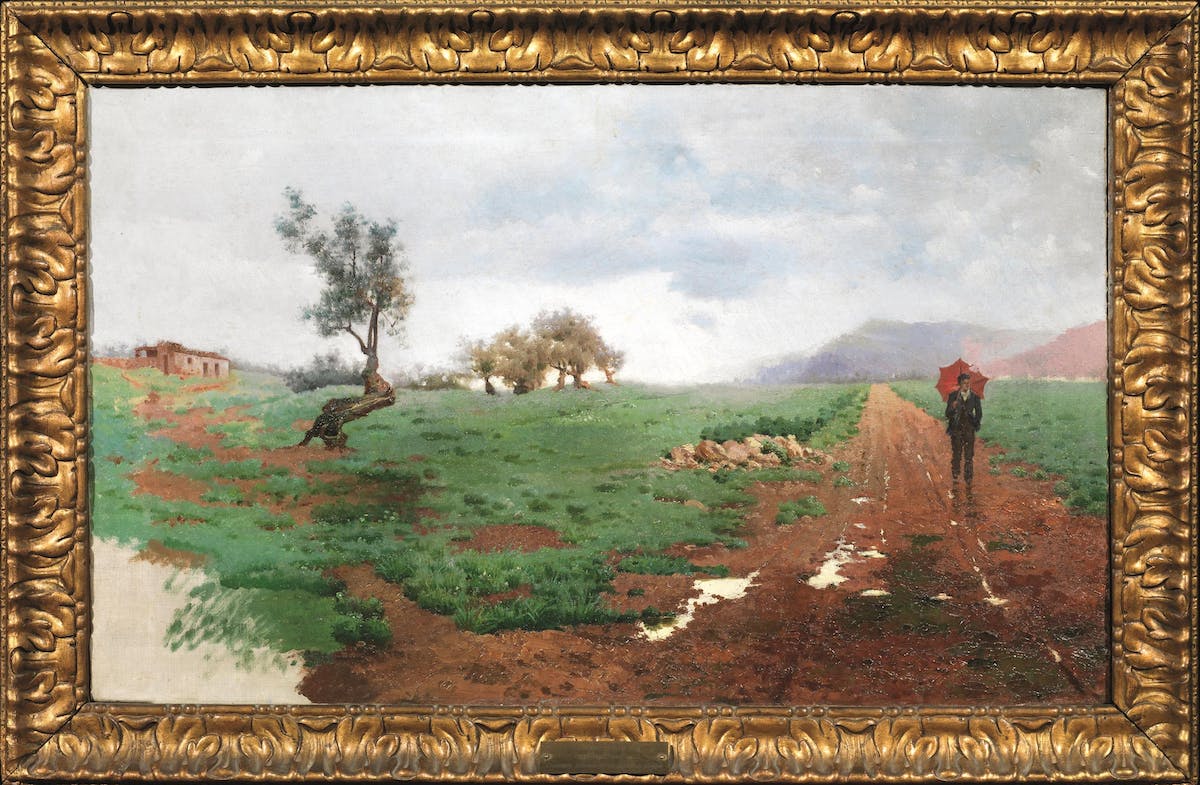 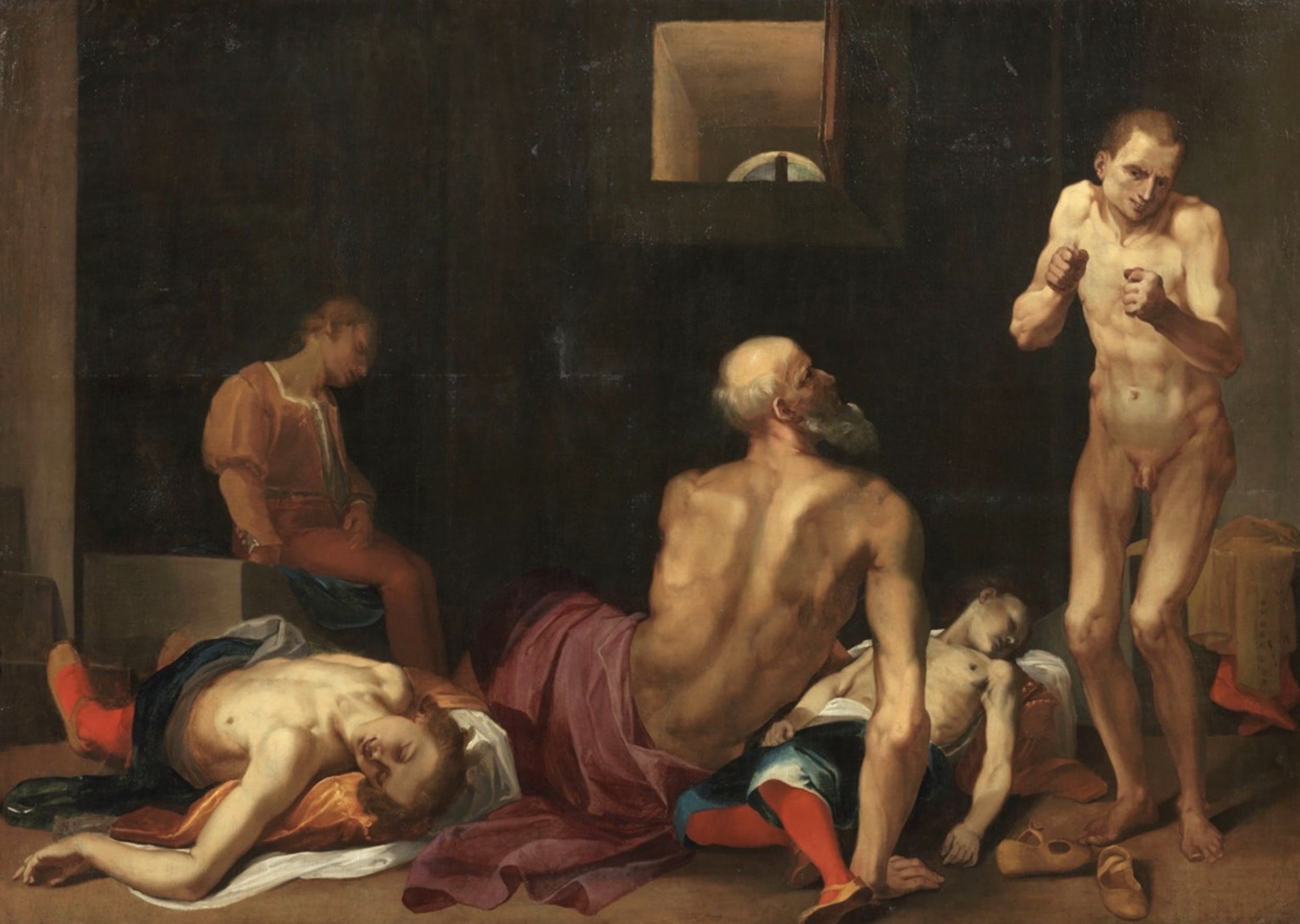 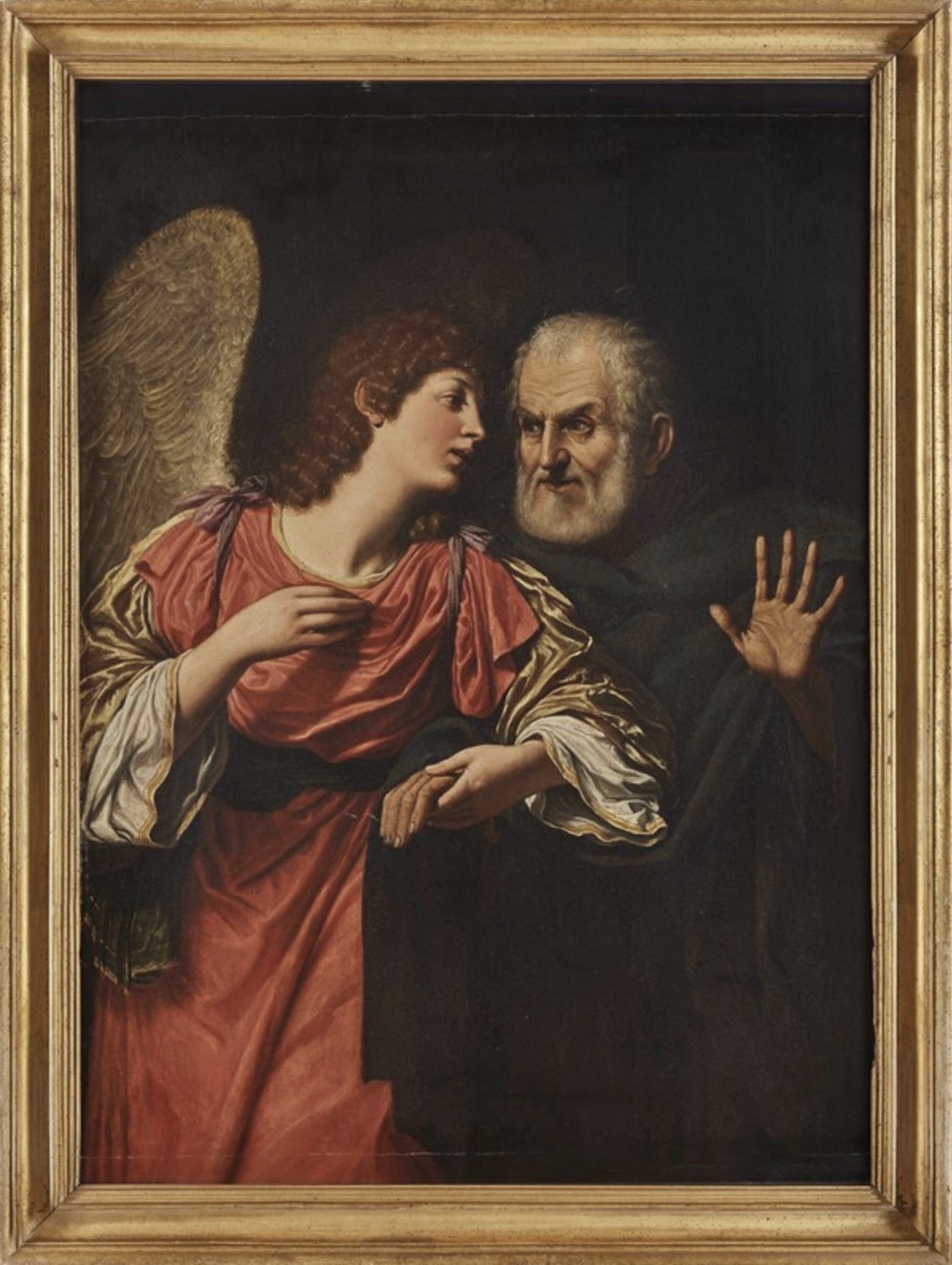 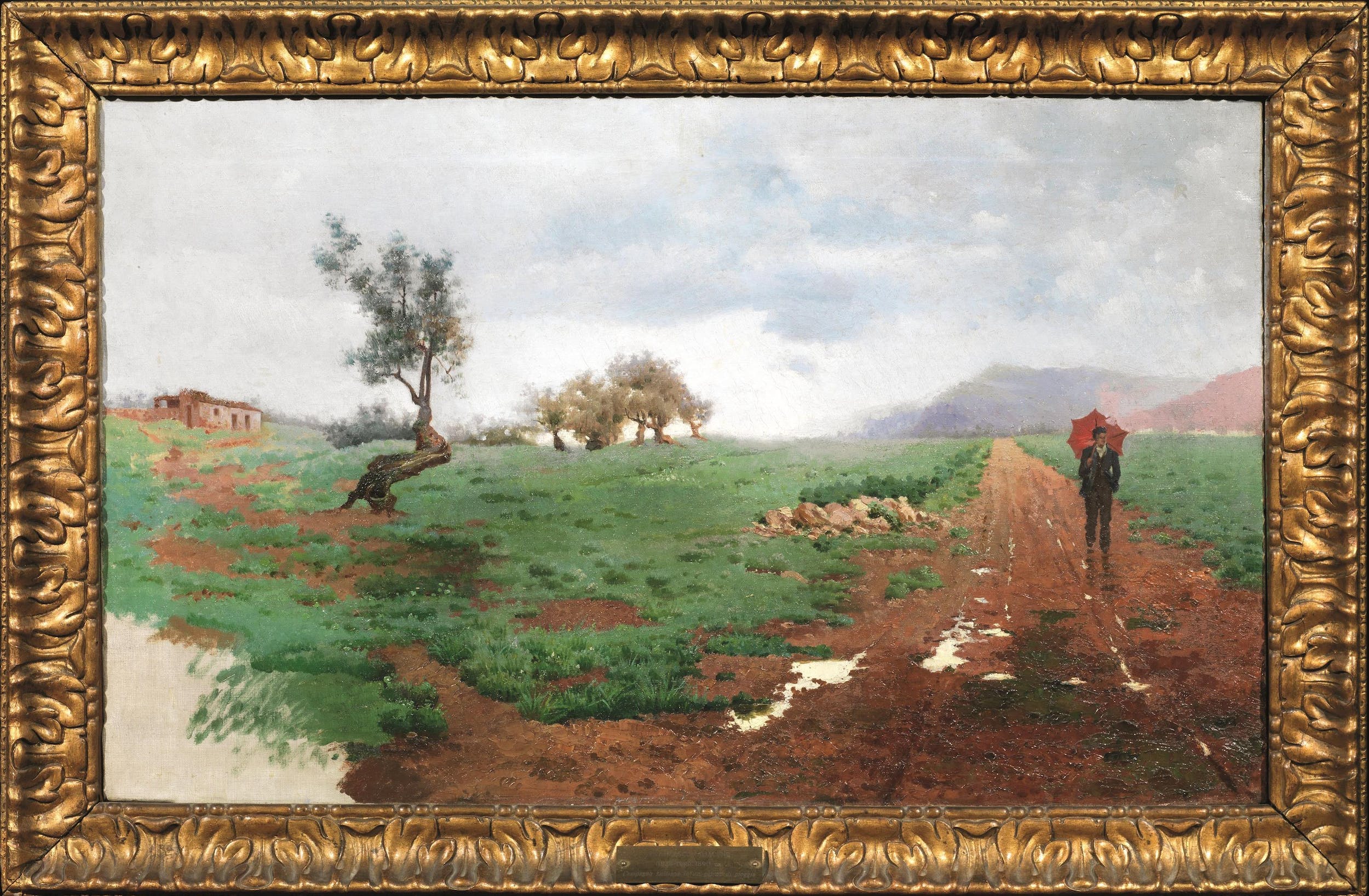