HomeMagazineInsights
Insights | 24/09/2017
News about a Painting at the Uffizi: the Queen of Armenia by Mario Balassi
Archival research and meticulous stylistic studies have led to the complete reinterpretation of a painting of the Uffizi Galleries. Previously believed to be a portrait of a member of the Medici family by the hand of late sixteenth-century painter Jacopo Ligozzi, the work has now been identified as a fictional representation of the “Queen of Armenia”, realized almost a century later by artist Mario Balassi.

Studies of the archives and a careful stylistic examination have recently led the author of this article to propose a complete critical review of an intriguing painting of the Florentine Galleries now preserved at the Gallery of the Statues and Paintings of the Uffizi. This short essay article outlines the key arguments which have been extensively analysed elsewhere [1].

The work in question is a portrait on wood (64x48 cm.), coming from the Medici Villa of Poggio a Caiano (inv. no. 64) and featuring an enigmatic and captivating princess.

The young woman, depicted in a head and shoulders portrait with long loose hair against a dark background and wearing an exquisite courtly gown (fig. 1, Mario Balassi, Queen of Armenia, Florence, Gallery of the Statues and Paintings of the Uffizi), has long been the subject of intense critical analysis in recent decades, beginning in the 1920s when Alinari published a photograph of the painting captioned as Caterina de’ Medici (1519-1589), the famous Queen of France. Over the years and until the present day, academics who have studied the painting have suggested various alternative identities, without ever reaching a satisfying conclusion and with considerable differences in terms of time and place: a Mantua princess, Margherita Gonzaga (1591-1632); another French Queen, Maria de’ Medici (1575-1642); Camilla Martelli, second wife of Cosimo I (1545-1590); and finally Cosimo I’s daughter Virginia de’ Medici (1568-1615). It should be noted that the identification of the latter two women has a much more precise justification, namely the splendid golden chain that adorns the breast of the young woman and which records show belonged to both women [2].

Naturally, some critics still had their doubts, linked not only to the obvious physiognomy (even if Florentine paintings in the sixteenth century could hardly be considered ‘photographic’) but also the unusual hairstyle which seemed somewhat inappropriate for a Medici princess, and the strange and decidedly unconventional headgear. The outfit was sometimes interpreted as a Carnival costume or perhaps an extravagance of the fanciful nature of whichever princess the portrait was attributed to, but it was nonetheless so unique that it was defined as an “imaginative creation, or rather one which does not correspond to any fashion of the time” [3].

In fact, documents traced by the author finally clarified that the painting of the mysterious young woman was not a portrait of a true princess, much less so a lady of the Medici house, but rather an imagined creation. Working back through the inventory notes held in the Florentine State Archive, until 1812 the references to the painting described always the portrait generically as “Princess, lavishly dressed”. Although in the previous centuries the painting no longer appeared in Lorenzo de' Medici’s Villa, a research carried out in an annexed building finally led to the discovery of the following inventory note, dated 31 May 1781: “A painting on wood measuring h. 1 fm., w. 2 fm. 18 [soldi] = painting, head and shoulders portrait of the Queen of Armenia with loose hair, Crown, and plume on the head, yellow-coloured ornament, and gold thread no. 2524” [4].

The precise description, supported by the eighteenth-century inventory number still visible on the back of the painting (fig. 2, Mario Balassi, Queen of Armenia, Florence, Gallery of the Statues and Paintings of the Uffizi, reverse side) led somewhat surprisingly to the identification of the young woman as a “Queen of Armenia”, in fact an imaginary figure.

Yet this did not explain the precise description of the elaborate Medici necklace, which as mentioned above is precisely documented as belonging to Camilla Martelli before being passed on to her daughter Virginia.

The answer could be found in the detailed and unusual commission. To create the gown, whose splendour was intended to express a generic regality and oriental origin, the artist, who we now know executed the painting not in the sixteenth century but around 1660, drew inspiration from another late sixteenth-century portrait featuring a dress, which would in fact have been somewhat dated at that time, worn by one of the two Medici women, Camilla or Virginia, along with the same precious necklace. The creation can be attributed to Alessandro Allori who painted various versions of it; the version most likely to have been imitated by Balassi is the one which appeared recently on the antiques market [5] (fig. 3 Alessandro Allori, Portrait of Camilla Martelli or Virginia de’ Medici, London, Sotheby’s). Having copied the dress, liberally embellished with imaginative lace trimming and frills, the artist completely invented the face and headgear that had already alerted the most perceptive critics.

In fact, in the upper part of the picture there are certain stylistic elements that offer clear indications as to the artist who painted it. Since the 1990s, the painting was thought to be the work of Jacopo Ligozzi and was usually dated somewhere in the 1580s [6]. Indeed, certain exquisite aspects of the work could be attributed to the Veronese artist who arrived in Florence in the previous decade; in any case the work appeared to originate from that era because of the decidedly sixteenth-century gown, the method of painting onto wood and, not least, the archaistic style.

However, as further stylistic analyses revealed, the artist was in fact the notable seventeenth-century painter Mario Balassi (1604-1667), a former student of Ligozzi who also worked in the workshops of Matteo Rosselli and del Passignano [7]. Balassi spent a long period of his youth in Rome with the Barberini family, before working in Florence for members of the Medici family such as Don Lorenzo and Cardinal Carlo. He was not above reproducing ancient works, as Filippo Baldinucci explains: “[Balassi] had truly extensive practice in learning the masters’ manners [and] imitating them all too well”. The biographer also makes reference to one of his works “replicated in the manner of a skilled ancient artist” which, believed by experts to be an original, would have earned him “up to two hundred ecus. However, it was enough for Balassi to have the pleasure of fooling the art professors and so he admitted the truth and withdrew the painting” [8].

The work's provenance from the Florentine Galleries is clear from the reappearance of an unusual painting on wood executed by Balassi in 1660, the Madonna and Child, now in the Haukohl collection in Houston (fig. 4, Mario Balassi, “Madonna and Child”, Houston (Texas), Sir Mark Fehrs Haukohl collection); equally refined and realized with the same unique technique on wood, it represents the Virgin’s face featuring the same idealized beauty of the Queen of Armenia, and of many other saints and heroines painted by his hand.

The painting at the Gallery of the Statues and Paintings of the Uffizi can be dated with reasonable certainty to around the same time as the Madonna in the United States; dated to 1661 and with unknown location, the sensational Portrait of Vittoria della Rovere was also produced in the same period [9]. This was the artist’s most extreme period, characterized by archaism and an affected elegance: a period of great originality which eluded critics for a long time but was noted by biographer Baldinucci, who recalled how Balassi “as he advanced in age, began to develop a new style and new ideas of colour”.

[2] The discovery of the document containing this precise description was noted in the description of the work by C. Contu and L. Goldenberg Stoppato in I gioielli dei Medici, dal vero e in ritratto, catalogue of the exhibition (Florence, 2003-2004), curated by M. Sframeli, Livorno, 2003, page 72, no. 14.

[9] Previously part of the Koelliker collection in Milan, the painting was transferred to London by Sotheby’s on 4 December 2008, no. 178.

Fig. 1: Mario Balassi, Queen of Armenia, Florence, Gallery of the Statues and Paintings of the Uffizi.

Fig. 2: Mario Balassi, Queen of Armenia, Florence, Gallery of the Statues and Paintings of the Uffizi, back. 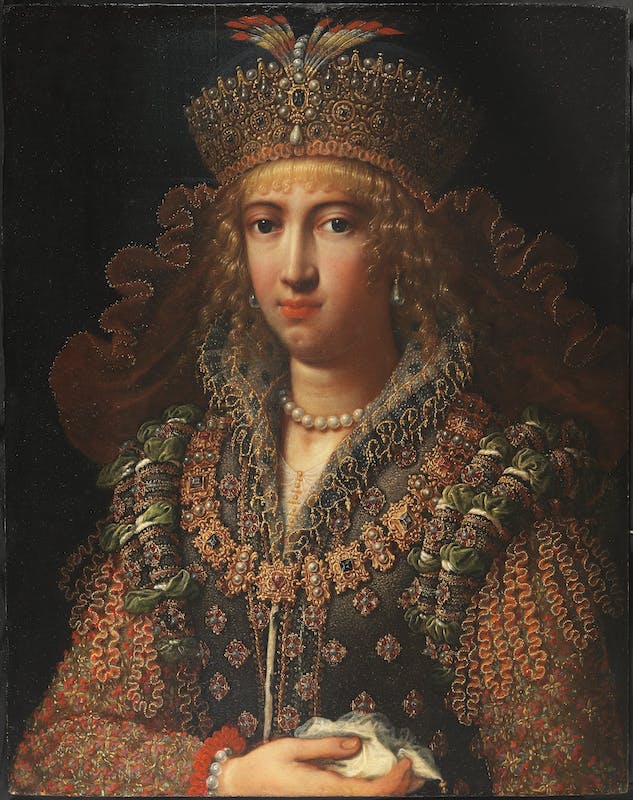 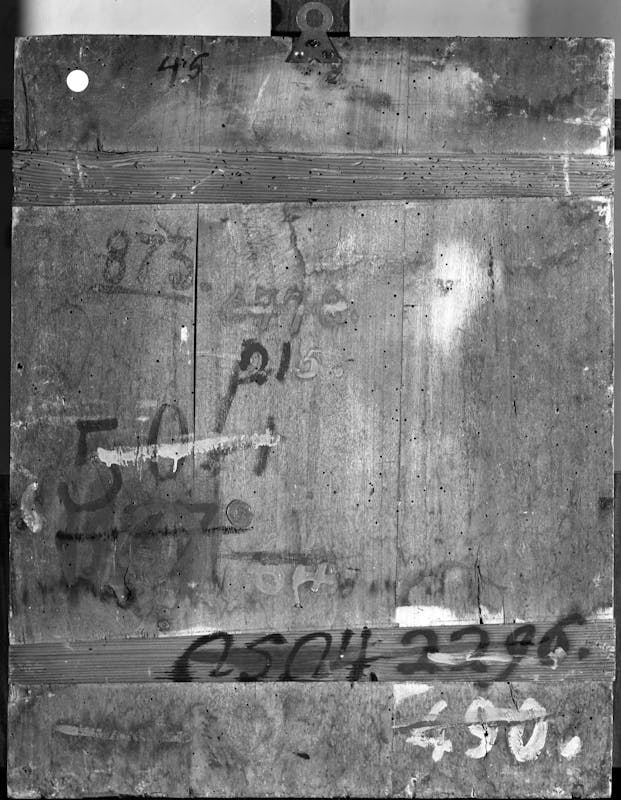 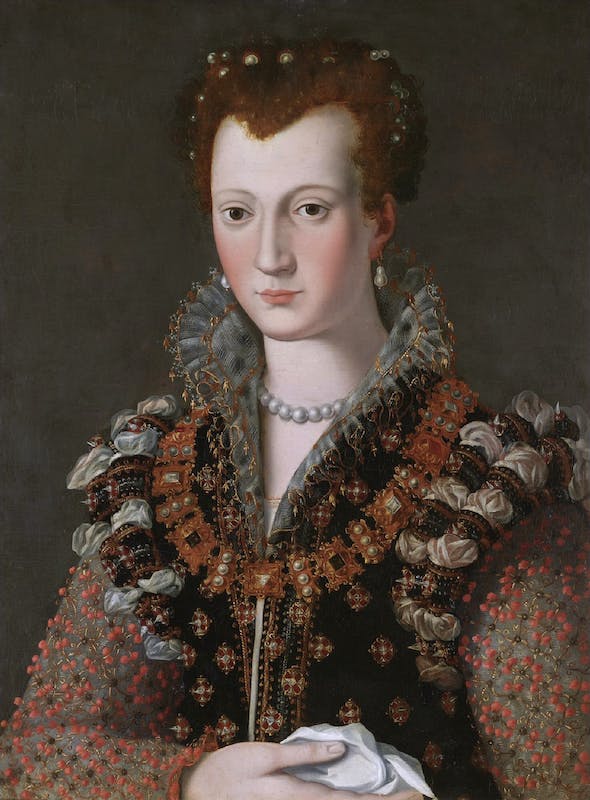 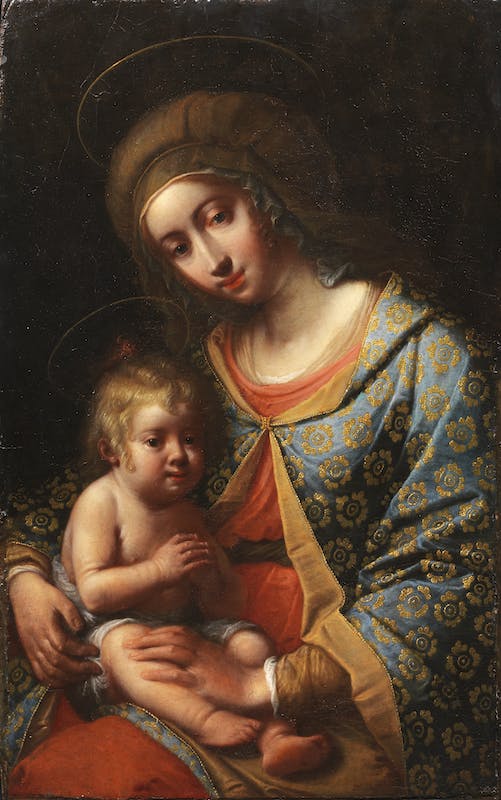 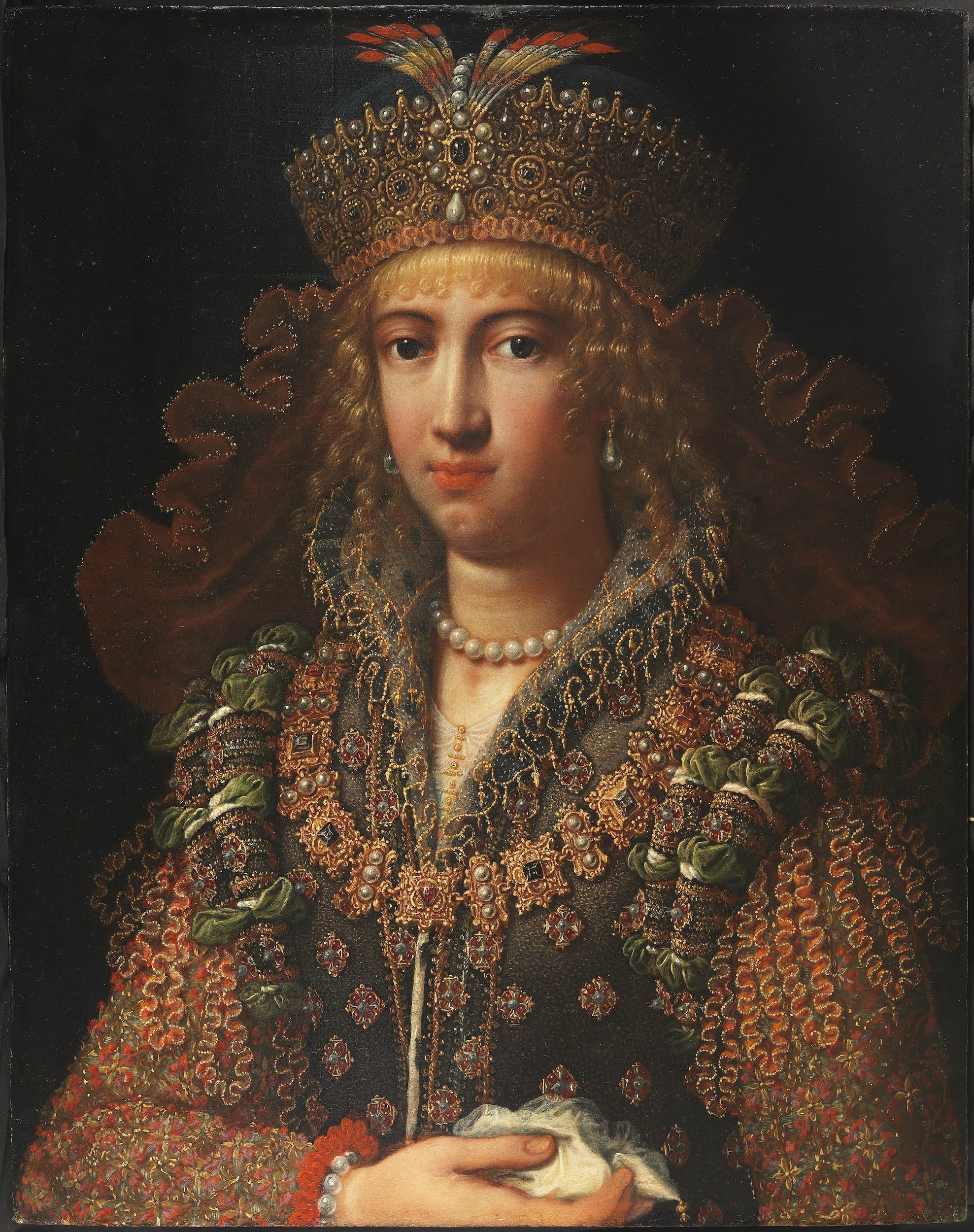 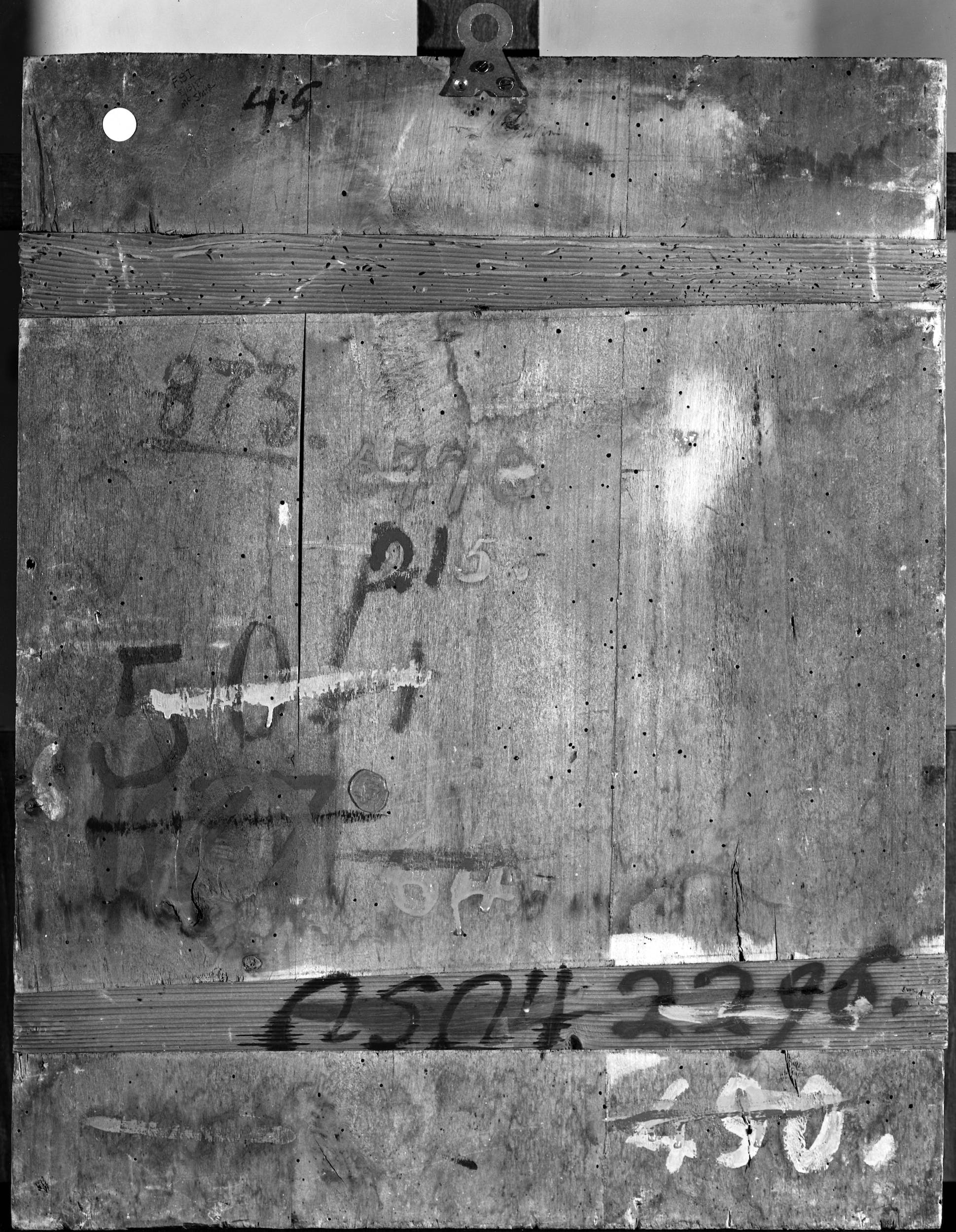 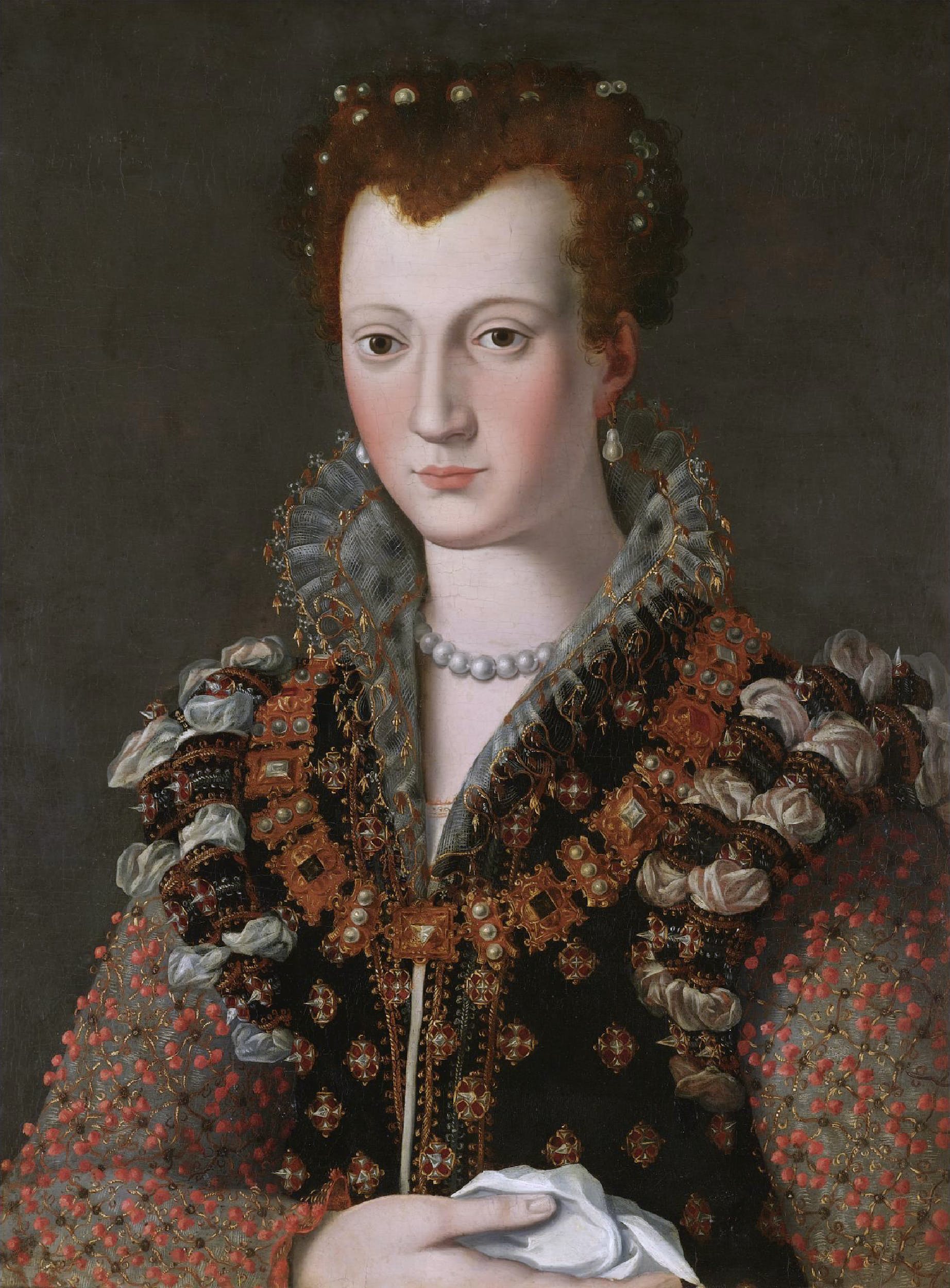 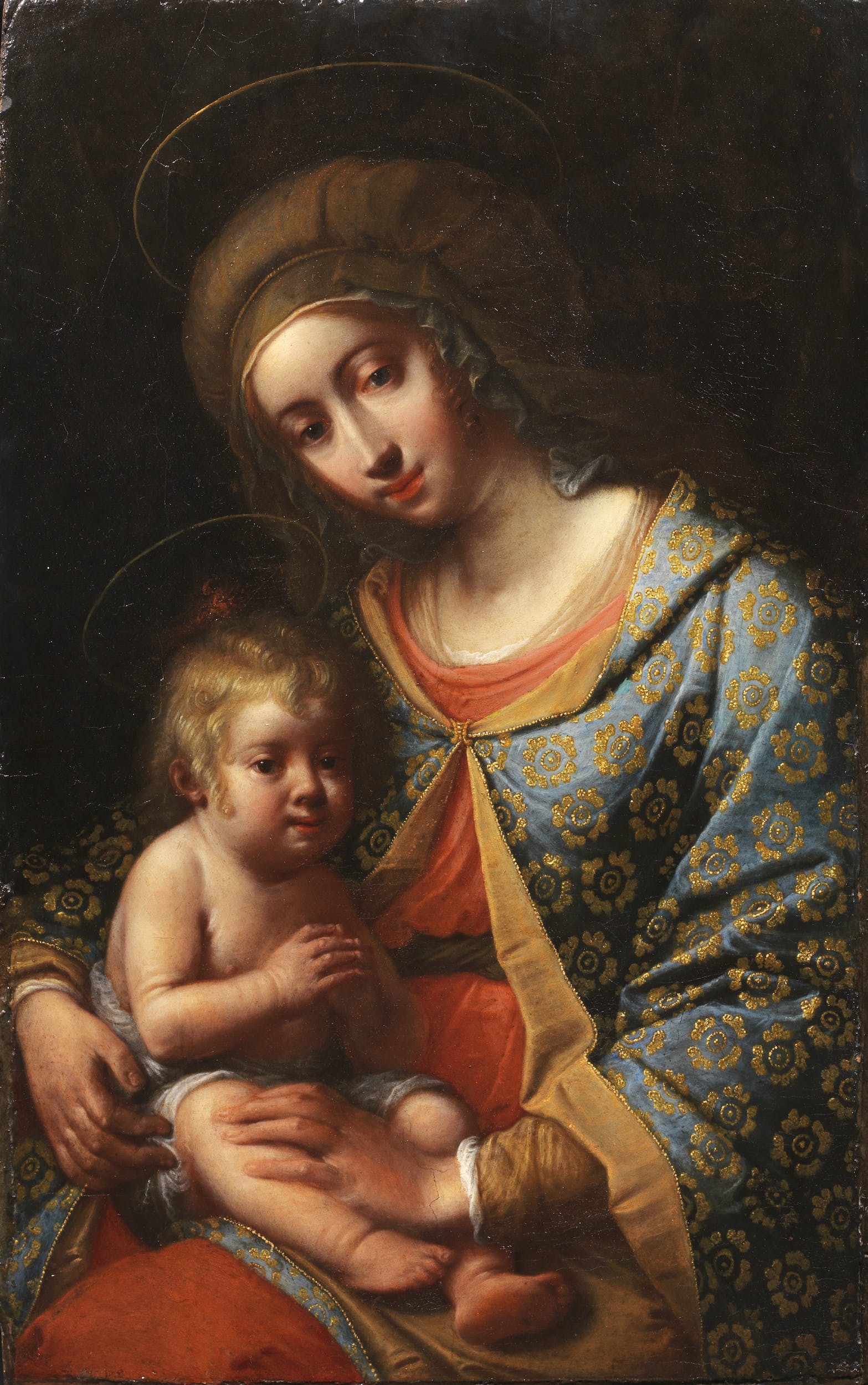