HomeMagazineNews
News | 08/04/2019
The diagnostic campaign of the Opificio delle Pietre Dure on the first landscape by Leonardo
The most important news from the latest diagnostic surveys: the evidence of the painter's ambidexterity and the discovery of a second landscape on the back

Leonardo da Vinci was ambidextrous. He wrote and painted with both hands: with the left - his dominant hand - and the right one. Renowned Institute of art conservation and scientific research, the Opificio delle Pietre Dure of Florence has found definite evidence of this unique characteristic thanks to a survey on the Landscape owned by the Uffizi Galleries and known as 8P (after its inventory number), which many experts consider to be the great Tuscan artist and scientist's first known drawing, and certainly his first dated work (5 August 1473).

The extensive diagnostic campaign has recently been carried out in view of the drawing's return to Vinci, that is, Leonardo's birthplace, on 15 April, after more than 500 years. The artwork will be on display in "Leonardo da Vinci. The Source of Genius" exhibition held in the town's castle to celebrate the 500th anniversary of his death.

The diagnostic surveys, which took several weeks, has been carried out by a team of experts who have also used experimental equipment and techniques under the supervision of art historian and conservator of the Opificio, Dr. Cecilia Frosinini.

The drawing bears two inscriptions: one is on the front side, written in the mirror by Leonardo from right to left: “Dì di s[an]ta Maria della neve / addj 5 daghossto 1473”; and the other on the back, ordinarily written from left to right: "Io, Morando d'Antoni, sono chontento", perhaps a note concerning a contract drafting.

A comparison between the two inscriptions provides us with the confirmation of Leonardo's ambidexterity. First of all, they are both autograph inscriptions (as are the sketches of a head and a human figure on the back of the sheet) because they are written with the same ink he also used to draw most of the Landscape, this being the outcome borne out by an accurate calligraphic survey on the two inscriptions and many other autograph texts by Leonardo. All in all, a combined study of the materials used, of the typical features of his writing and a comparison between different documents has shown that the artist presumably used his left hand to write the front inscription in "mirror writing", while he used his right one to write the back inscription ordinarily. Both forms of writing, while displaying a certain number of differences due to the use of different hands, share numerous key features that unquestionably display Leonardo's unique style.

A second carbon black landscape and the "hidden" drawings

The evidence of Leonardo da Vinci's ambidexterity, however, is not the only result of the in-depth diagnostic campaign. The opportunity to analyse the precious document directly has allowed the Opificio's experts to shed light on numerous other mysteries enclosed in the drawing which could never have been discovered just by using photographic techniques of analysis. They include the full emergence under infrared light of two different versions of the landscape on the front, and of a similar process on the back, where two landscapes are superimposed one upon the other, and are totally different from the landscape on the front. They depict a river scene in the centre with a stream and two banks connected by a bridge, and a sharp and jagged rock on the left. Leonardo first drew this landscape using carbon black and then proceeded to highlight some of the features in ink and also to add in some additional mountain peaks.

The use of carbon black, probably in pastel form, shows that Leonardo da Vinci was using this material earlier than previously thought. And equally early, if they really can be dated to 1473, are the numerous traces of sketches drawn in sanguine on the upper part of the sheet's back. In fact, Leonardo's earliest-known sanguine drawings had been dated to 1492 so far.

An examination of the back revealed – beneath the riverscape to the lower left and further up – a number of leadpoint drawings, a stylised flower and several geometrical motifs, which are particularly visible under infrared light.

The drawing also revealed a series of mysterious incisions made with a so-called "blind" or "colourless" stylus, which did not leave even the lightly coloured traces typical of leadpoint. Some of these incisions can be identified, for instance a horse on the back of the sheet, while others suggest a second mountain range on the front and yet others of uncertain significance on the front may well be marks left by another sheet placed on top of this one, thus indicating that the sheet was intended for everyday use rather than as a work in its own right.

Extensive, and naturally non-invasive, examinations along with the use of a substantial number of different technologies and scientific models were required to reveal the secrets of this Landscape 8P. The drawing was subjected to infrared inspection using a highly advanced model capable of acquiring 32 different colour bands, designed by the Cnr-Ino (National Institute of Optics). The Opificio's experts also used an innovative fluorescent X-ray system lighting up entire areas rather than specific localised points as has been done hitherto (in this case the prototype was built by Florence University's National Institute of Nuclear Physics); and a portable detector of organic materials (devised by the Cnr-Ifar, Institute of Applied Physics); alongside 'traditional' observation under the microscope and the use of extremely high resolution photodiagnosis supported by computer processing.

The origin of the work

This multifaceted inspection campaign has allowed us to put together an accurate reconstruction of the creative process that went into devising and producing the legendary Landscape. Leonardo availed himself of different tools and materials to produce it. He used a lead stylus that made a grey mark on the sheet, a kind of embryonic pencil, to trace the "base" or outline sketch for the whole drawing. He then elaborated on this leadpoint sketch using ink (containing copper and carbon black elements), probably also superimposing on the sheet a layer of tracing paper, on which he had already composed part of the drawing in order to be able to draw the 'skyline' of the landscape with greater accuracy, while he painted the vegetation, the rest of the ground, the mountains and the water freehand. From a chronological point of view, the drawing on the front was executed in two separate phases: in the first phase Leonardo used a stylus, tracing paper and one kind of ink, while in the second phase, he used a different kind of ink with a different chemical composition. 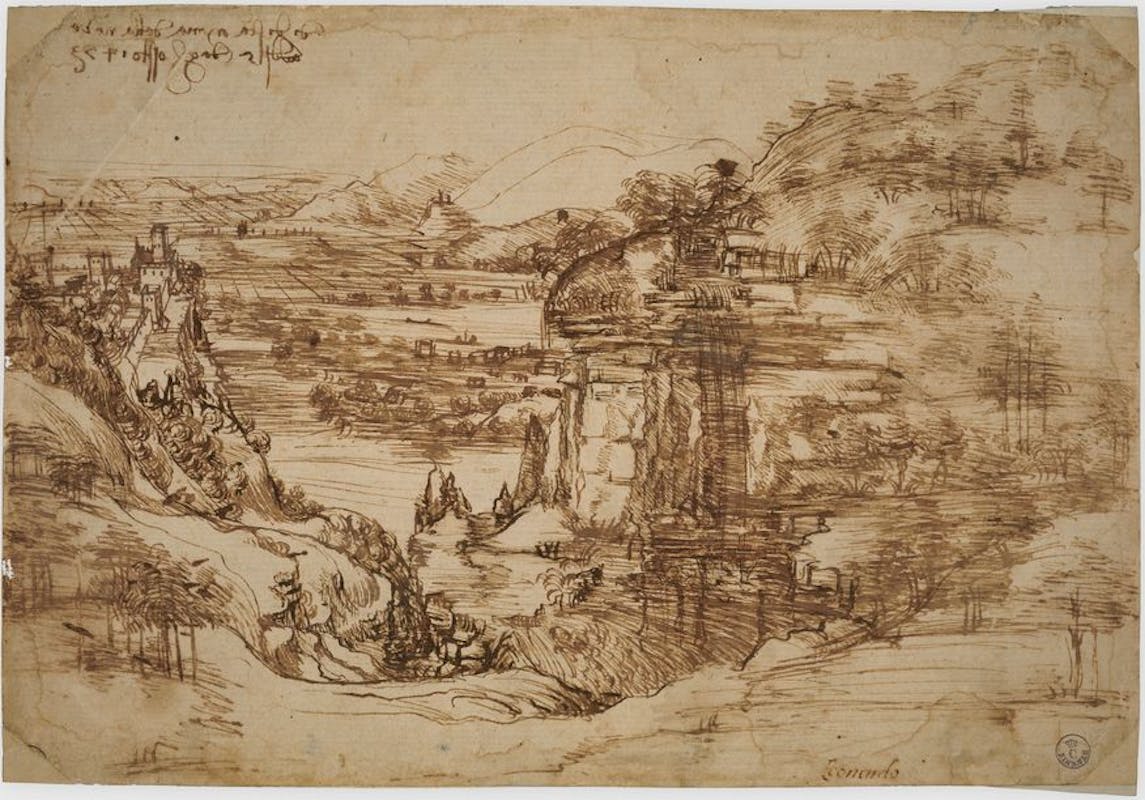 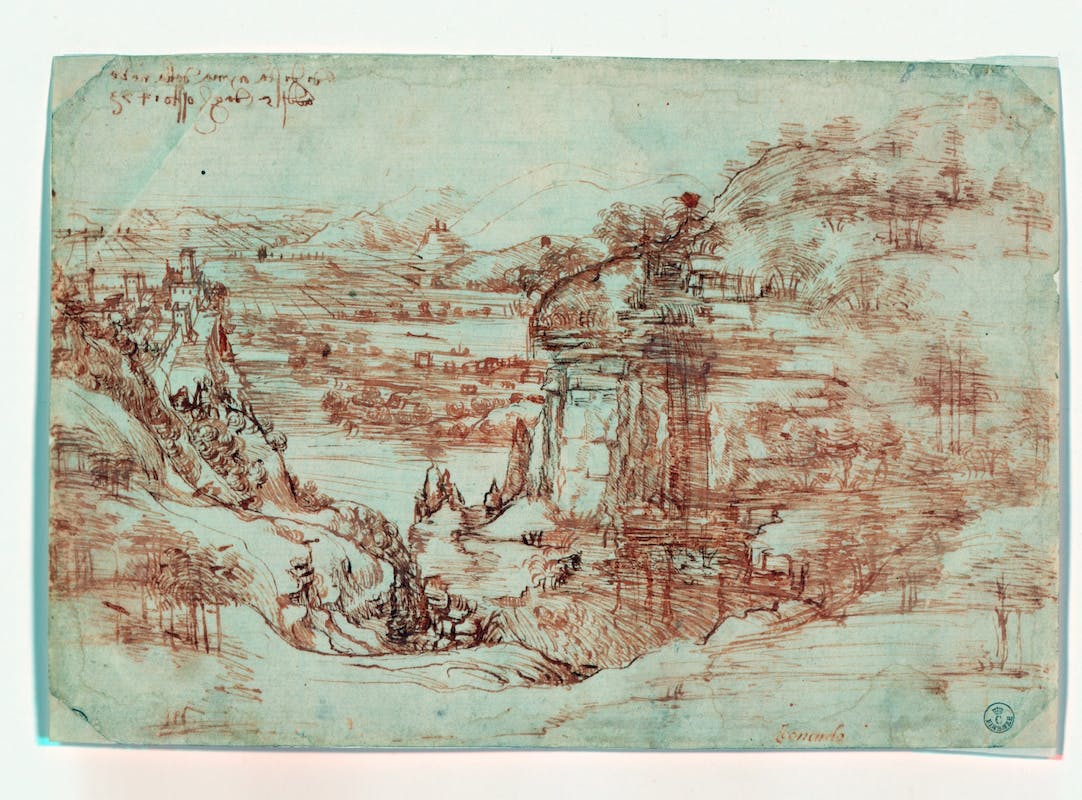 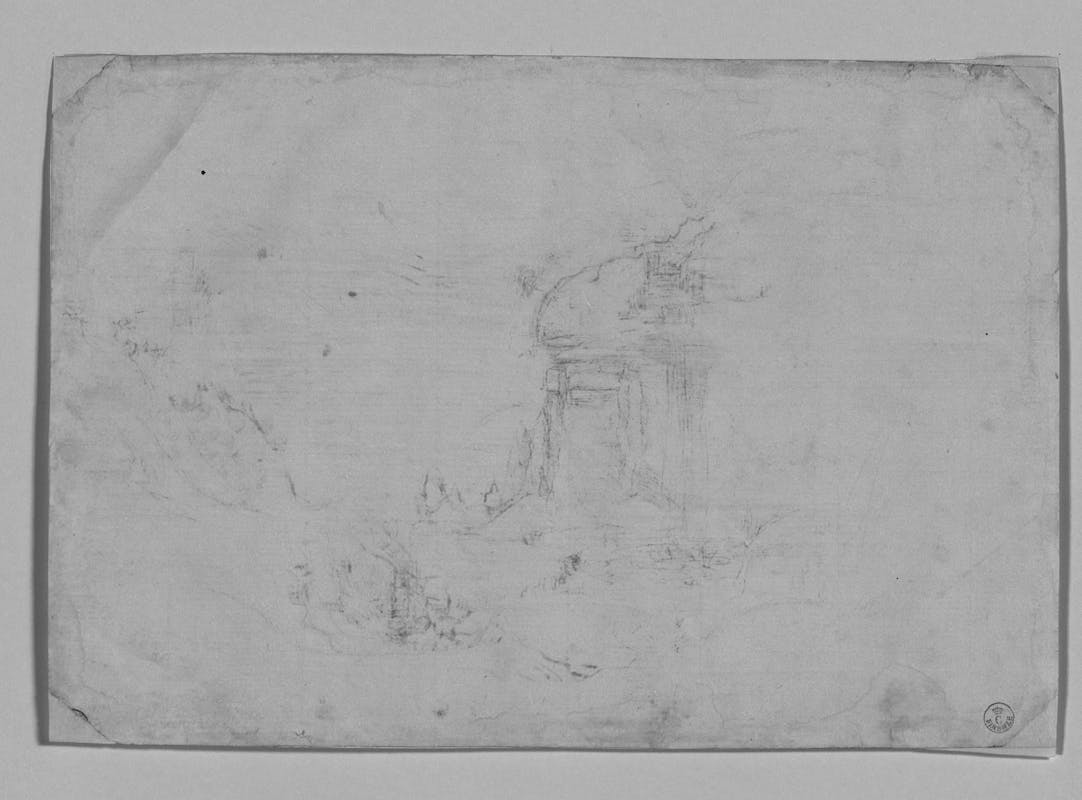 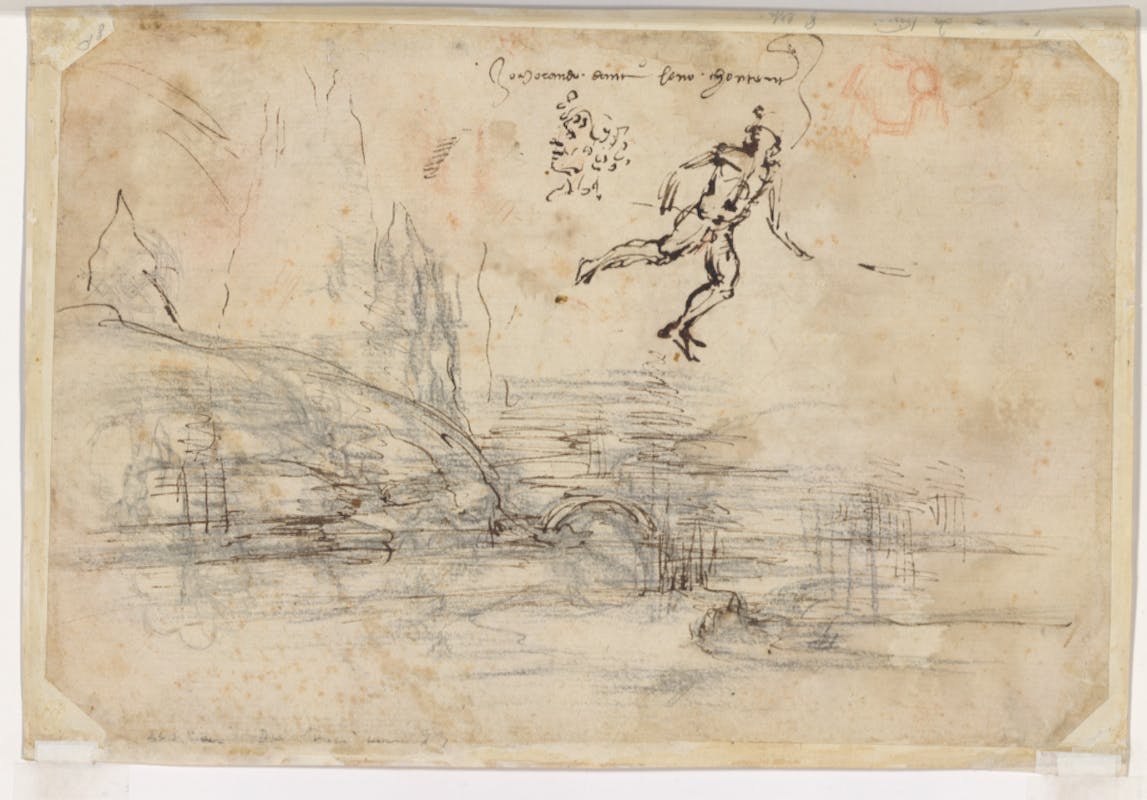 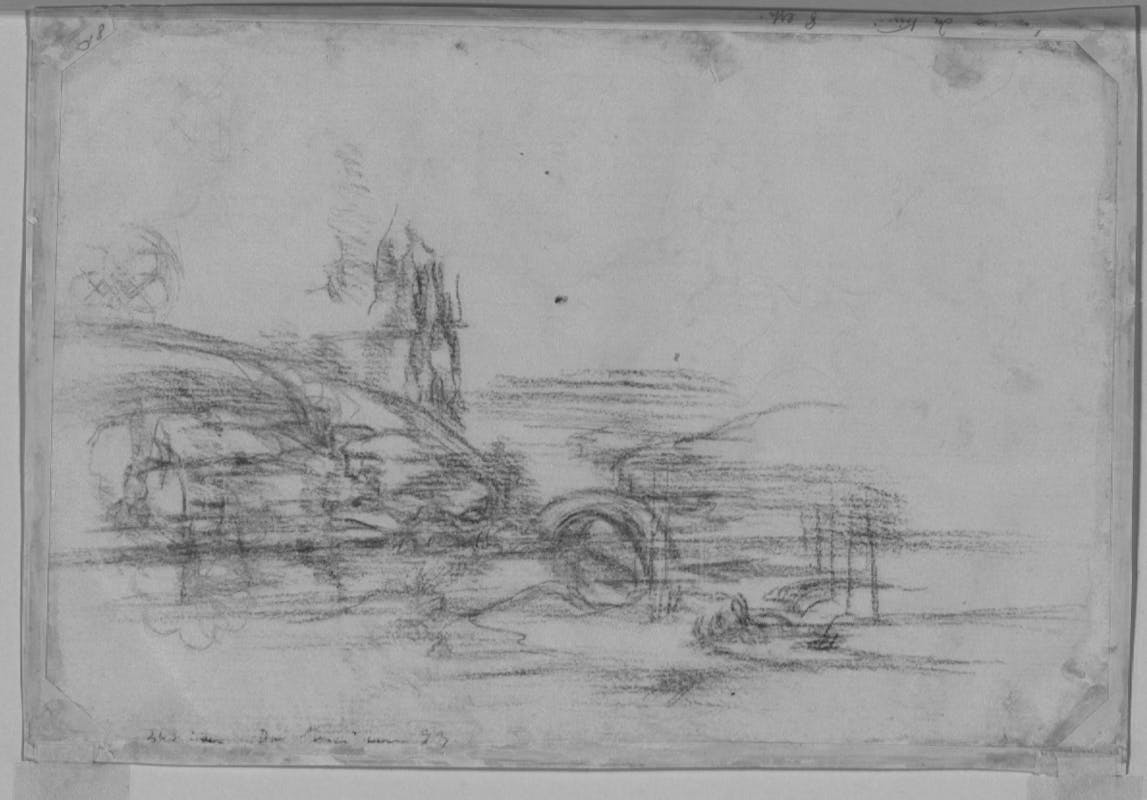 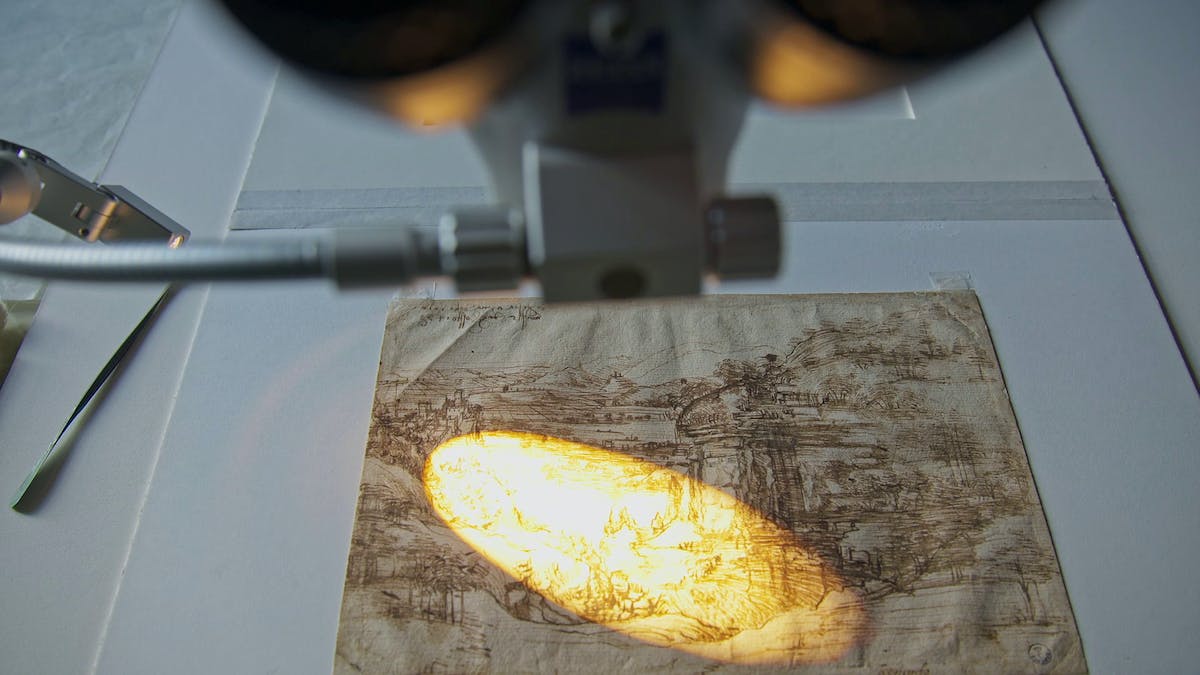 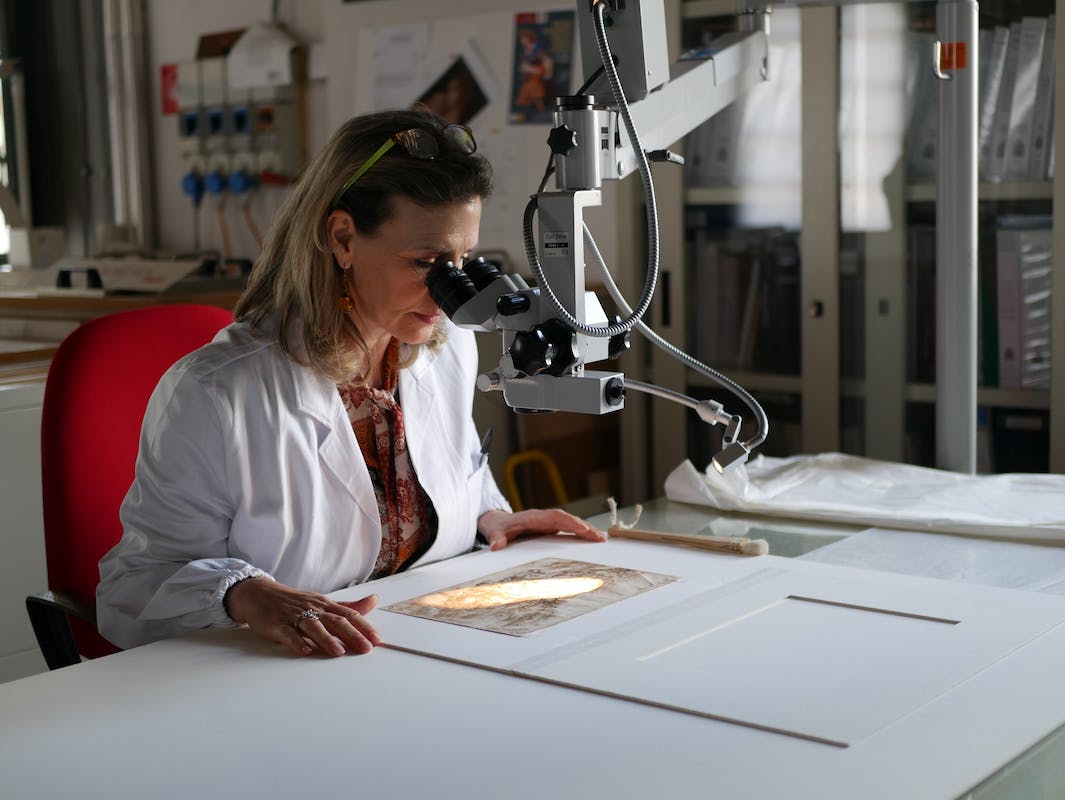 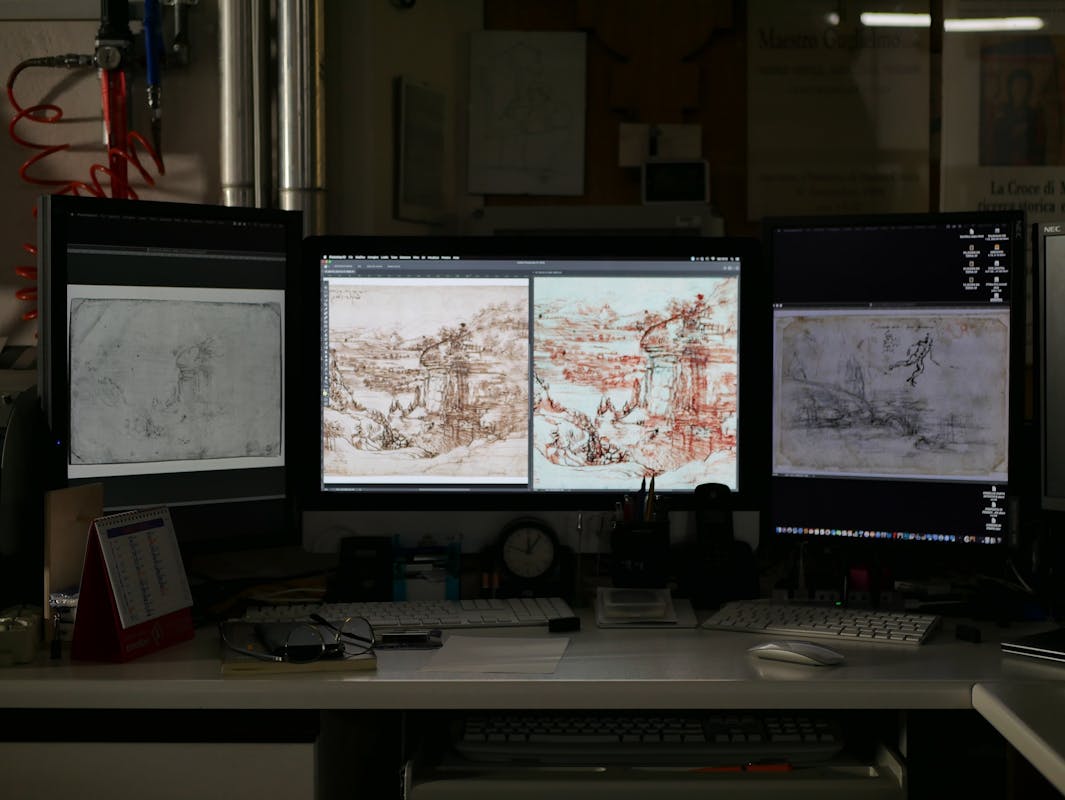 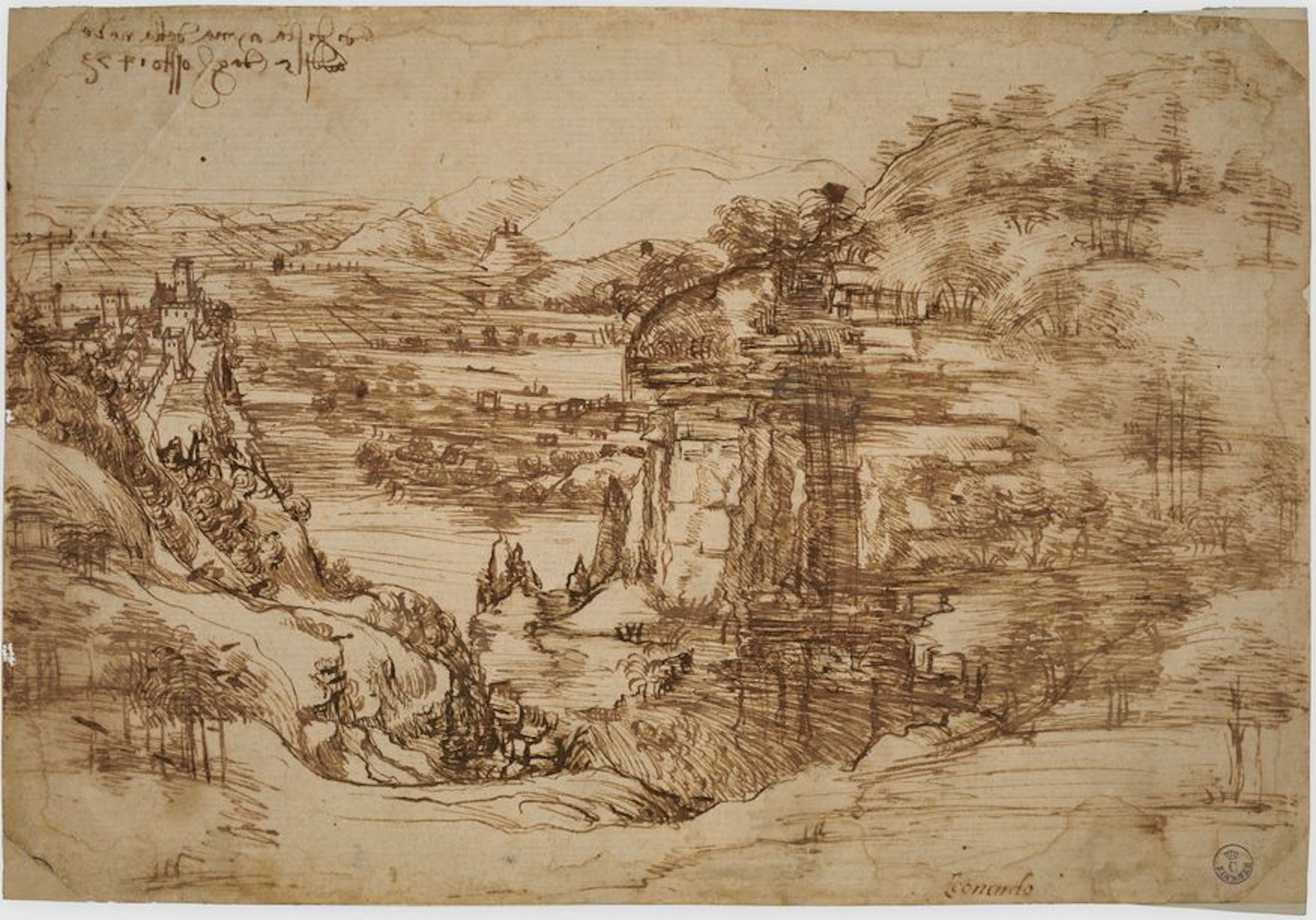 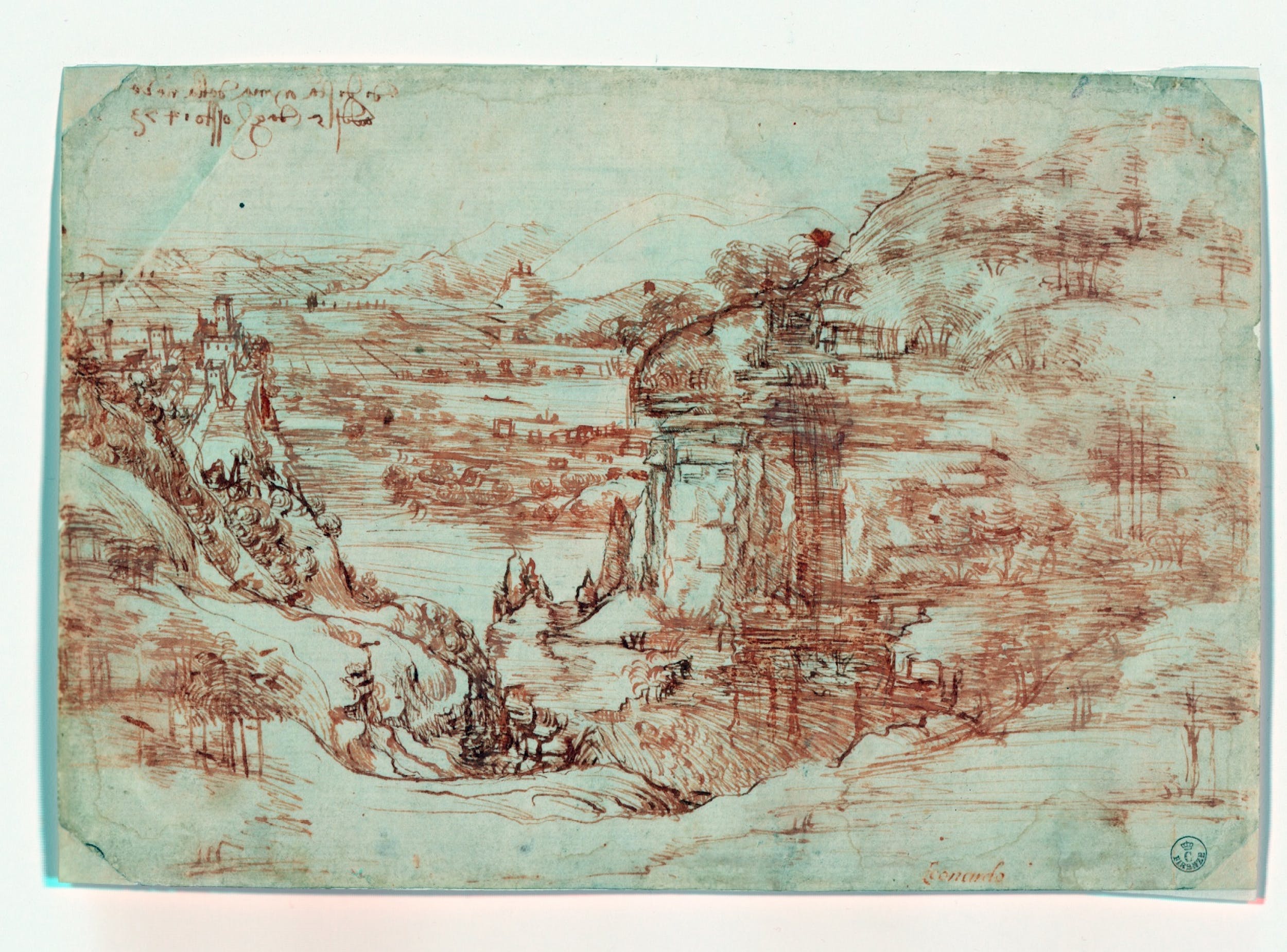 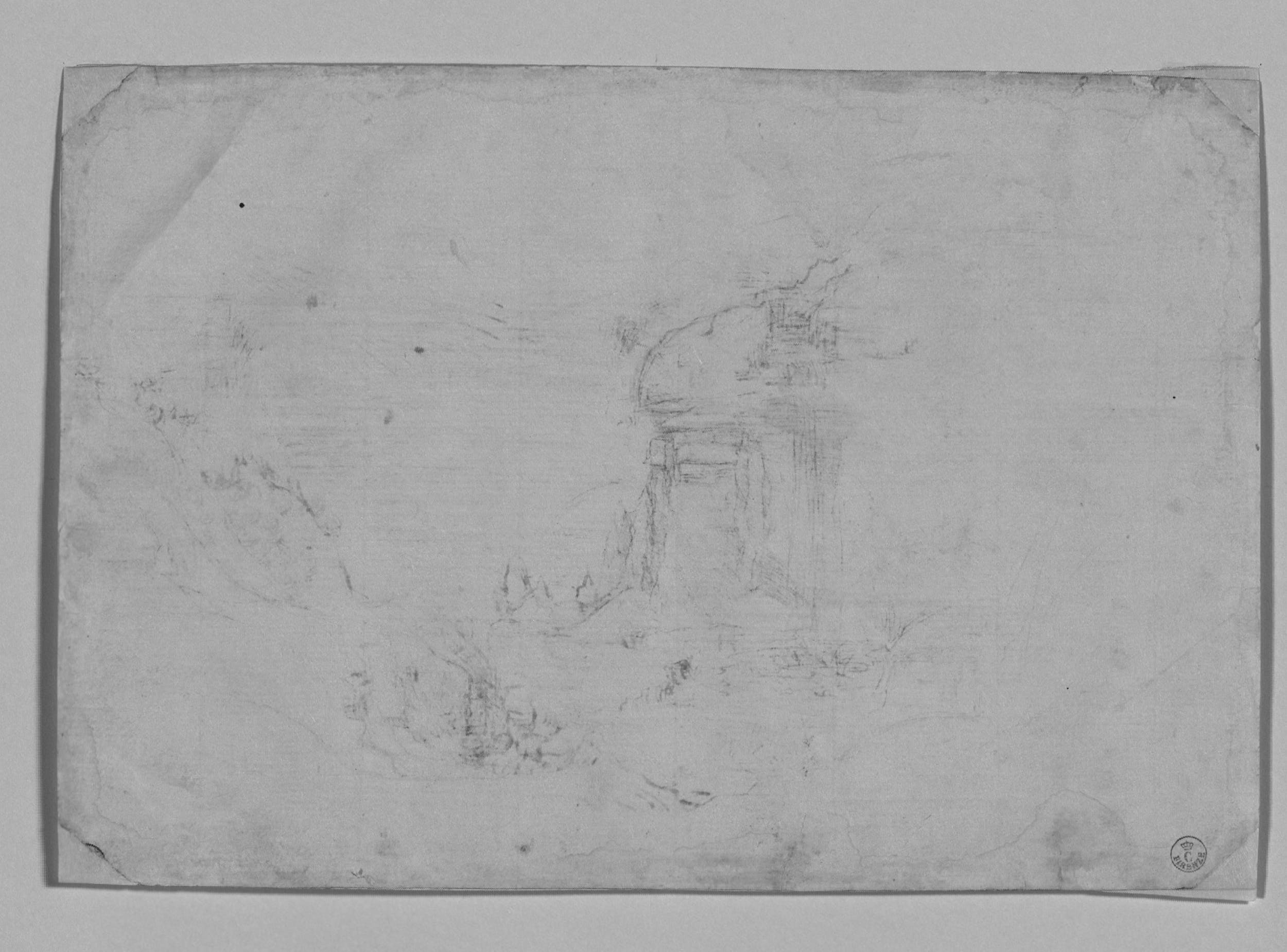 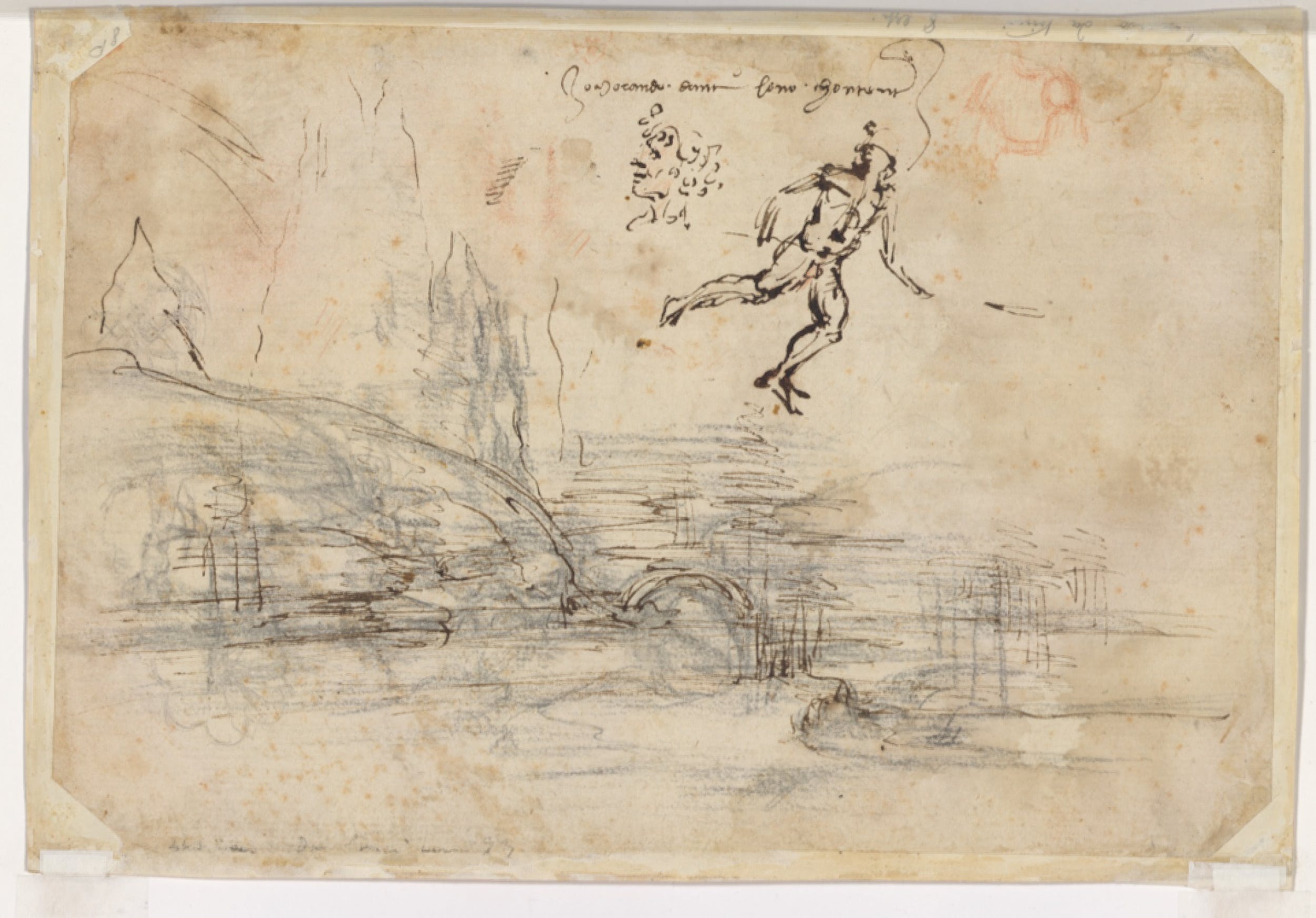 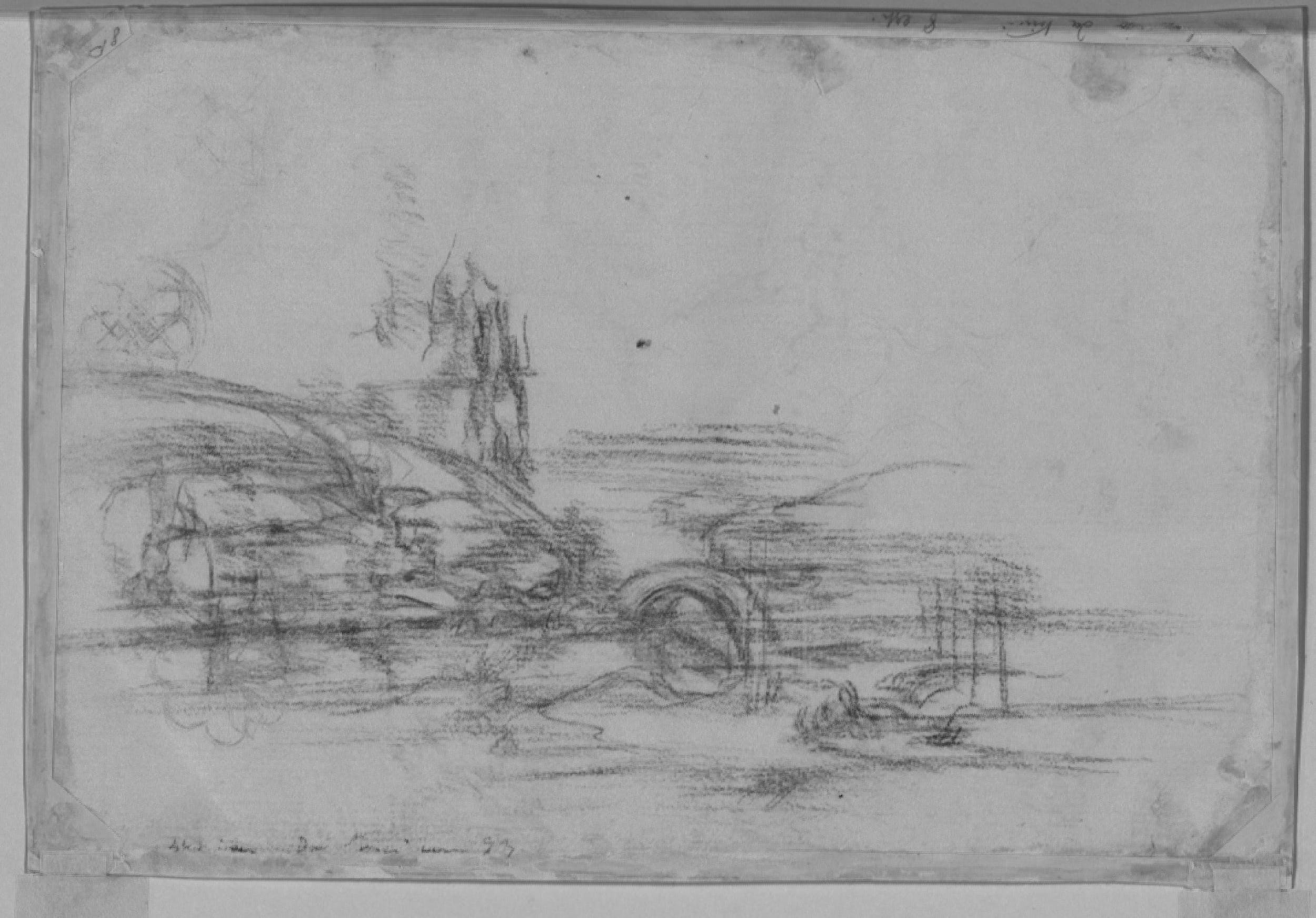 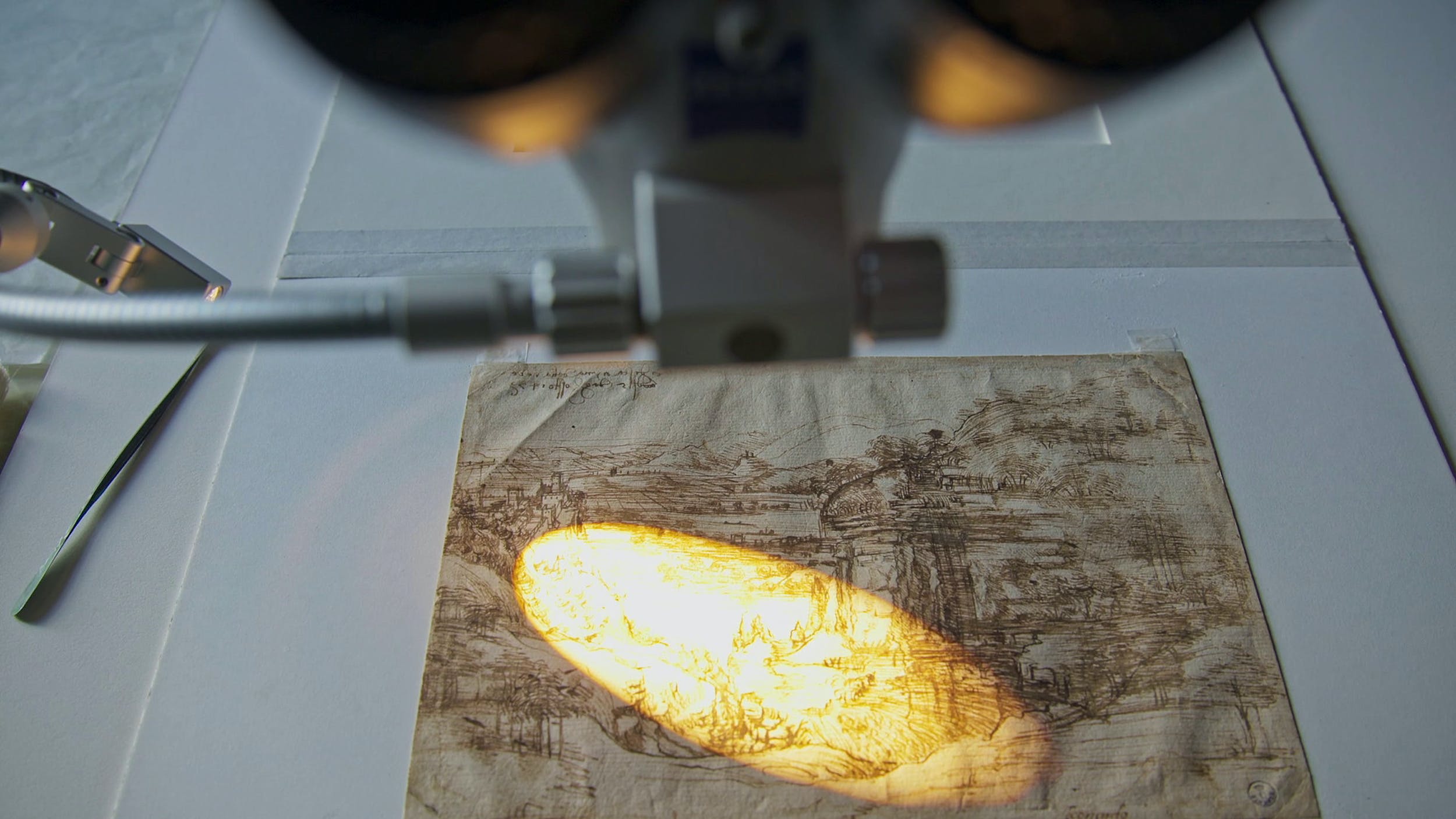 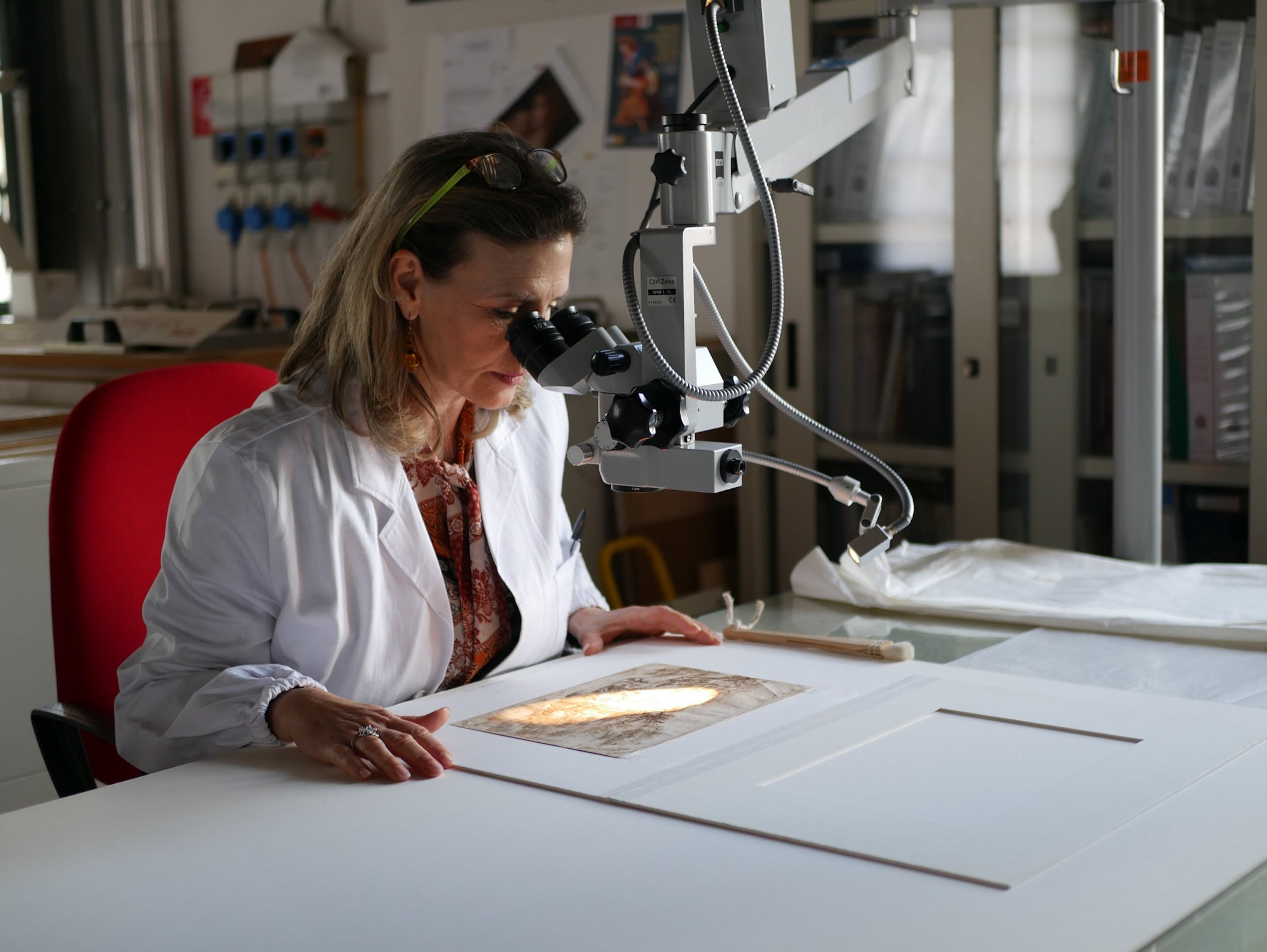 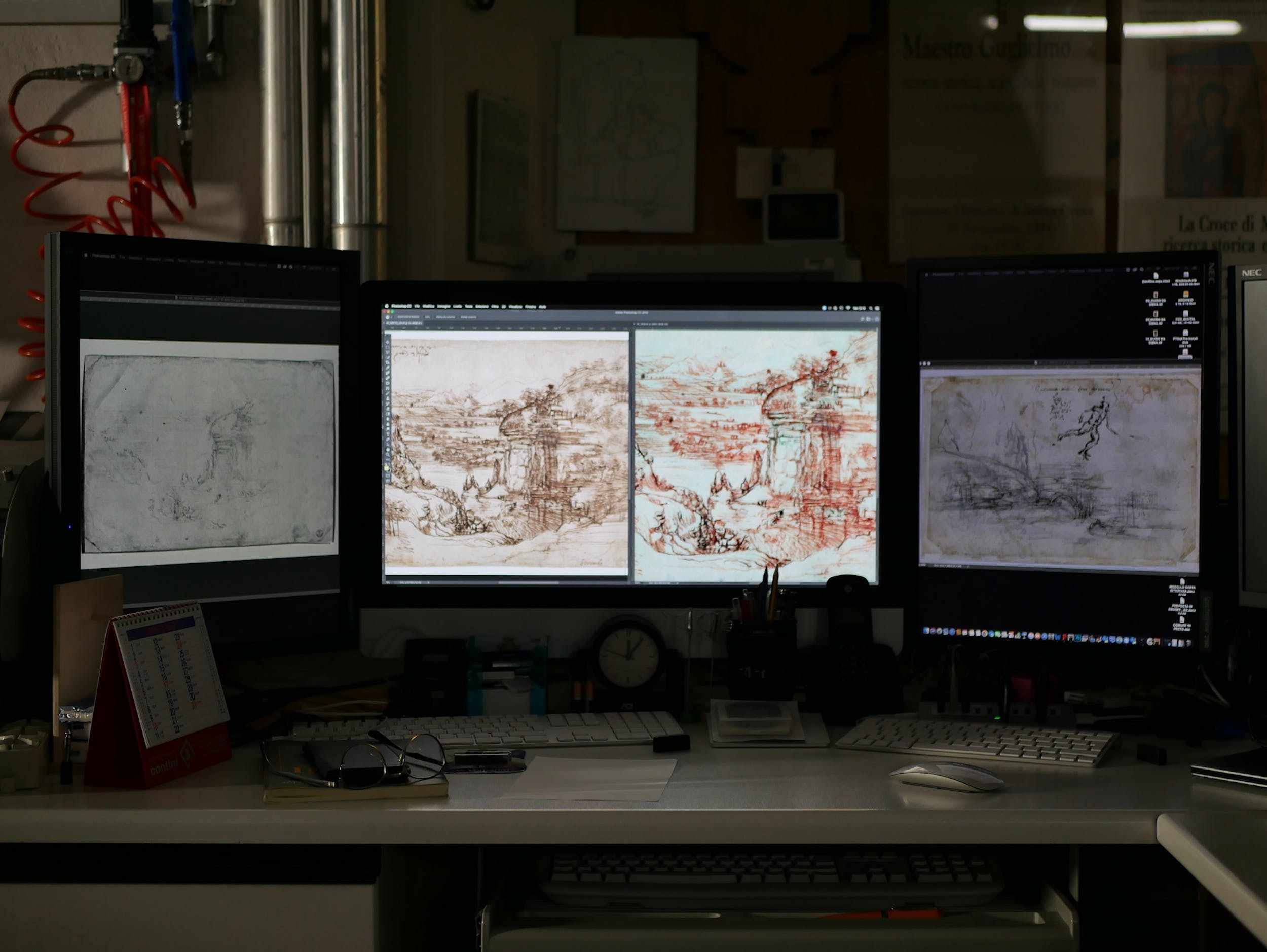