The rectangular panel consists of a wooden board, probably poplar, with the grain running lengthwise and protected all around with a modern frame.

The panel has probably been cut down, as the cut to the two angels collecting the blood of Christ would seem to suggest. It has also been made thinner and on the back, it has three modern metal battens with wooden dowels. There are cracks that have been mended with “butterfly inserts”. The painted surface is much depleted and has numerous retouches, as well as extensive reapplication of the black background. The repainting conceals the original colour, perhaps executed in azurite (Tartuferi 2014), or in gold leaf, as the presence of incisions along the profile of the figures would seem to suggest. The cloak of the Virgin, lined in yellow, today has a certain bright purple colour, iridescent with white areas, although it probably had a finish - now lost - that made it look blue, according to the usual iconography associated with Mary.

The gilding of the halos has been scratched away and there are gaps in the halos of Christ and the Evangelist. The gild decorations on Maria’s cloak are mainly reconstructed.

It was presented to the Exports Office of Florence in 2011 on behalf of Arianna and Elisa Magrini, and then purchased through Ministerial Decree 201196 of 17 June 2011 and destined to the Uffizi Galleries, where it arrived in July of the same year.

The tall, narrow shape of the panel suggests its purpose as a small altarpiece, perhaps for a pillar or alternatively, the central section of a tabernacle. Alterations to the support and the presence of the modern frame along the whole perimeter prevent us from establishing whether or not there are traces of its being fixed to other elements, such as side elements or a pinnacle.

The panel is mentioned by Van Marle ((Van Marle 1923-1938, IX ,1927, p. 219 nota), with dubious attribution to Mariotto di Nardo, while Offner (Offner 1956, p. 171 nota) refers to it to the school of Niccolò di Pietro Gerini and figures in the posthumous lists published by Maginnis (Offner 1981, p. 78) among the works of “later and remoter gerineschi” painters, together, however with paintings unanimously considered cornerstones of Gerini’s catalogue, such as the Death of the Virgin in the National Gallery of Parma, inv. 431. It was presented as a genuine work by the master in the catalogue for the exhibition held in Florence in 1960 (Mostra dei tesori segreti 1960, pp.7-8 cat. 7), where it is considered stylistically close to the frescoes in the church of San Francesco in Prato, a work signed by Niccolò di Pietro Gerini and datable to the early 1390s. This attribution to the Florentine painter was accepted by Boskovits (1975, p. 408), and dated to 1395-1400 ca. and by Tartuferi (2014, p. 177), who considers the work to be an expression of the re-evocation stage of classic giottism, characteristic of the master’s methods in the late 14th century. The painting is recorded with its attribution to Niccolò di Pietro Gerini and dated to 1390-1399 in the Zeri Photographic Archive (card 2998).

The reference to Gerini, an exponent of the most conservative current of Florentine painting in the late 14th century emulating the iconographic and formal models of the early 14th century, revisited through a tendency to simplify forms and accentuate the volumes traditionally used by Orcagna, should be confirmed, as indicated first and foremost by the figures, characterised by square features, a prominent chin and heavy expressions. The composition, although essential and didactic, looks a little compacted and without spatial depth, with the flying angels that brush against the halos of the Mourners. Similar characters return also in monumental compositions of Niccolò Gerini such as the Crucifixion frescoed in the sacristy of the church of Santa Felicita in Florence, dated March 1387 (1388 current style; F. Fiorelli Malesci, La chiesa  di santa Felicita a Firenze, Firenze 1986, pp. 60-65). The fresco, like the composition in the Uffizi, shows the cross supported by wooden wedges inserted into the Golgotha, a detail of minute reality already used by Taddeo Gaddi, whose workshop would have been familiar to Gerini during his training (i. e. the Crucifixion in the sacristy of the church of Santa Croce. For the biography of Niccolò di Pietro Gerini see S. Pierguidi, Gerini Niccolò di Pietro, in Saur Allgemeines Künstler-Lexikon, LII, München-Leipzig 2006, pp. 146-148, for his earlier production see S. Chiodo, A Critical and historical corpus of Florentine painting, Sec. IV, vol. IX, Painters in Florence after the Black Death: the Master of the Misericordia and Matteo di Pacino, Florence 2011, pp. 63-66).

Of the angels flying over the cross, a widespread motif in Florentine art throughout the 14th century, the one on the left side, arms open wide to collect the blood running from both Christ’s hand and his rib, has an equivalent in the Crucifixion no. 607 in the Pinacoteca Nazionale in Siena,  dated about 1390-1395 (Torriti 1980, pp. 234-235) and which provides us with a valid comparison for the Uffizi panel also for the decorations on the halos, with their undulating vine design that stands out to contrast with the granite surface, according to the artistic idiom of the late 14th century. The contrasting chiaroscuro emphasizes the complex drapes on the cloaks and the shapes of the bodies, even if the Christ crucified in the Uffizi painting has an anatomical molded that is more schematic and perfunctory. The date 1390’s seems likely, not far from the Crucifixon in the sacristy of the church of San Francesco in Prato (G. Guasti, La cappella de' Migliorati già Capitolo dei Francescani in Prato dipinta nel scolo XIV, Prato 1871; M. Boskovits, Pittura fiorentina alla vigilia del Rinascimento 1370-1400, Firenze 1975, pp. 99-101, 114; B. Cianelli, La Cappella Migliorati in San Francesco e la “Madonna della Cintola” in San Niccolò: due restauri esemplari. Spunti per un confronto, in Prato Storia e Arte, n. 107, 2010, pp. 117-127. Attributed to a date later than 1396 by L. Bellosi in Le arti figurative a Prato ai tempi di Francesco Datini, 1991, reprinted in idem, Come un prato fiorito. Studi sull’arte tardogotica, Firenze 2000, pp. 83-93). 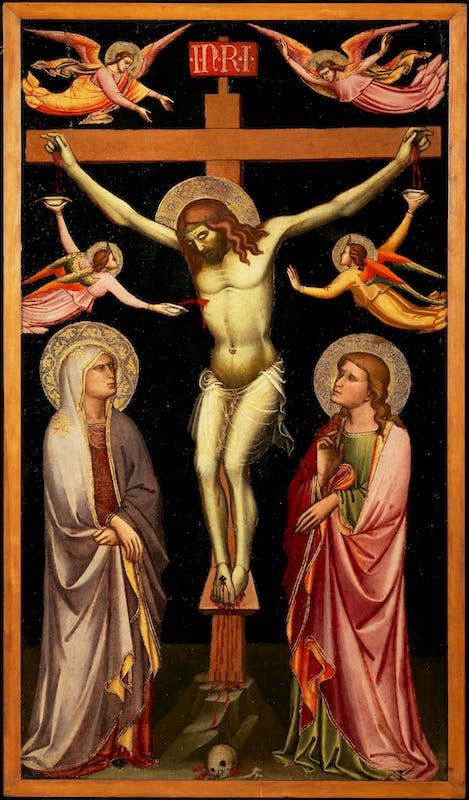 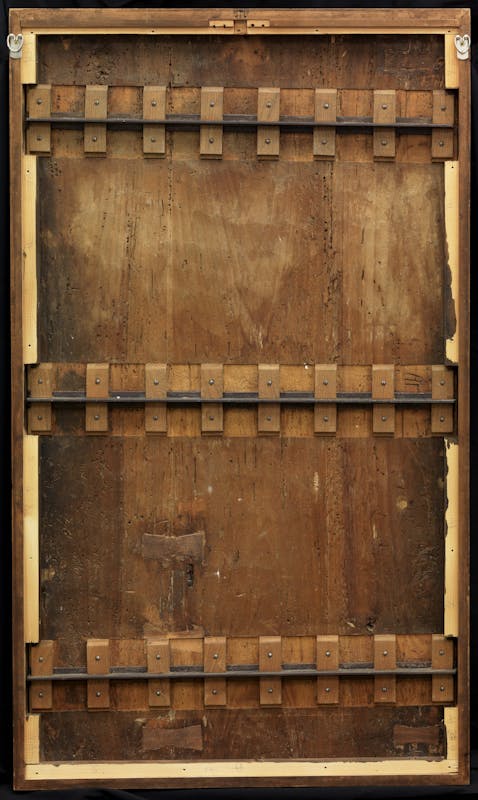 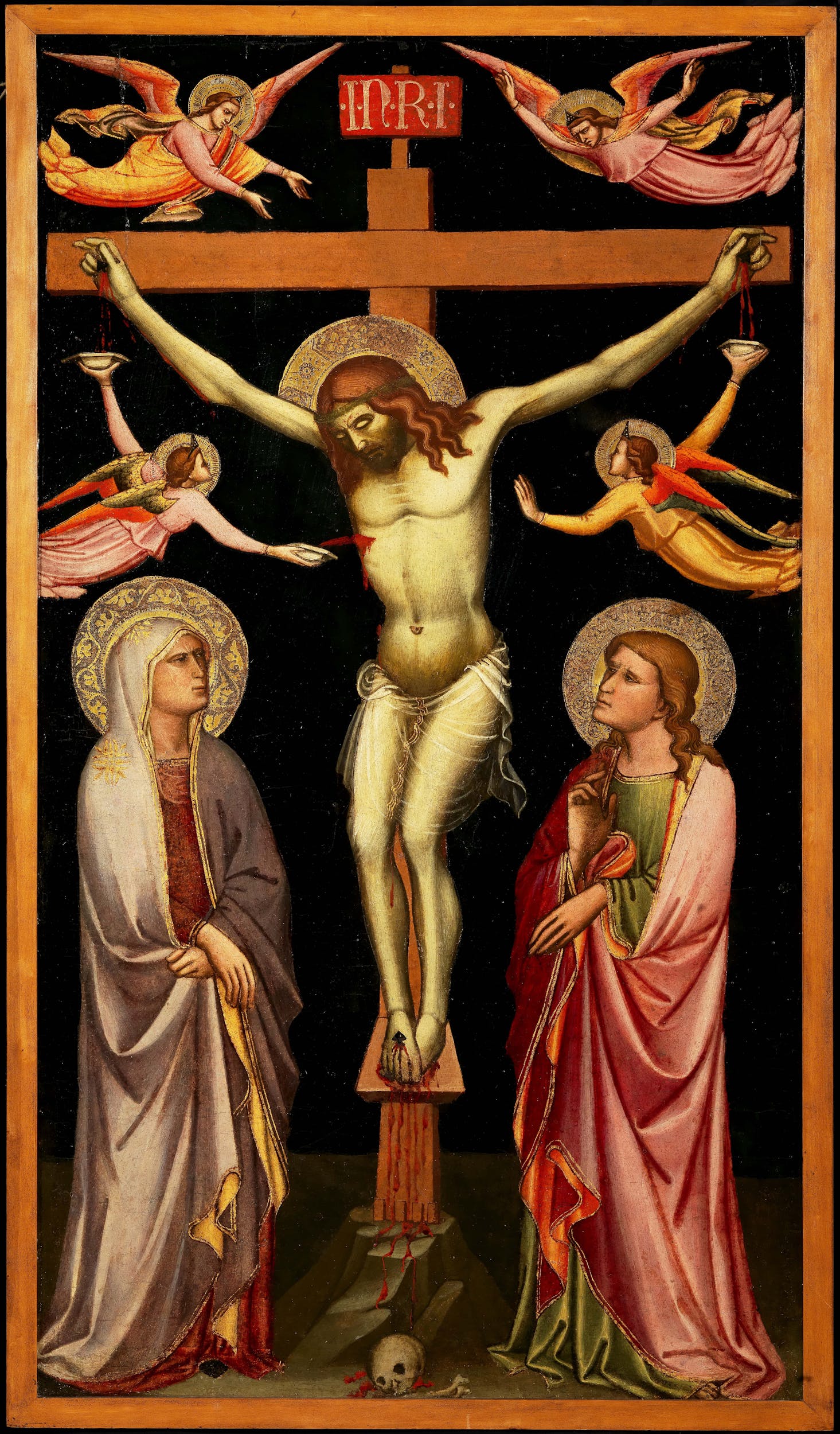 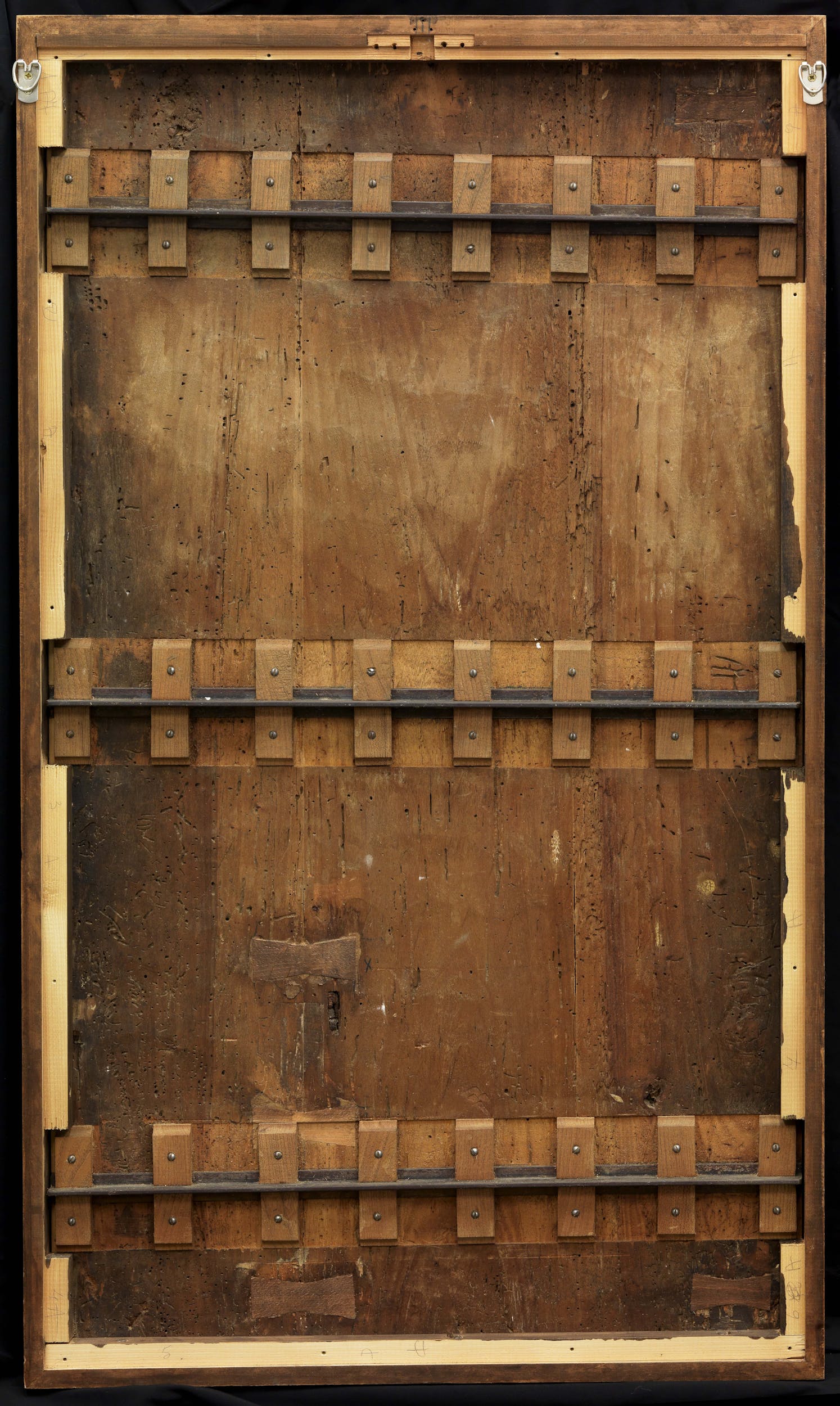