After restoration at the hands of the Opificio delle Pietre Dure lasting over two years and after being sent to Rome for the major exhibition held at the Scuderie del Quirinale to mark the 500th anniversary of Raphael's death, the Portrait of Leo X with Cardinals Luigi de' Rossi and Giulio de' Medici, one of the artist's most celebrated masterpieces, is finally coming home to the Gallerie degli Uffizi, where it is to be star of a show devoted entirely to the picture and its restoration. The exhibition, entitled "Raphael and the Return of the Medici Pope: restoration and discovery" and curated by Opificio Director General Marco Ciatti and by Uffizi Director Eike Schmidt, is to be held in the Sala delle Nicchie in the Galleria Palatina in the Pitti Palace and to run from 27 October 2020 to 31 January 2021. The exhibition layout is designed to document and explain the complex restoration process and the numerous scientific analyses which the painting has undergone to ensure that its rich palette with its dominant range of reds and its extraordinary variety of detail that have made it one of Raphael's most famous creations can once again be enjoyed in full. Thanks to the many preliminary inspection techniques adopted (X-ray, photographic exploration, imaging, investigation with an optical microscope and scanning microprofilometry, to name but a few), it has been possible to explore Raphael's underlying drawings and to establish that the painting is a fully autograph work by his hand, thus allowing us to dismiss once and for all a suggestion voiced by several scholars to the effect that the figures of Cardinals Giulio de' Medici and Luigi de' Rossi may have been added to the picture at a later date. Gallery Director Eike Schmidt has revealed that when the exhibition in the Sala delle Nicchie in the Galleria Palatina closes, the Portrait of Leo X and the two cardinals is to be displayed in the museum's Saturn Room alongside a number of other masterpieces by Raphael, including portraits of two other important prelates: the Portrait of Julius II and the Portrait of Cardinal Bibbiena.

Performed by the Opificio delle Pietre Dure's team of experts in Florence under the supervision of Director General Marco Ciatti and under the guiding hand of Cecilia Frosinini, the restoration, which began in autumn 2017, was occasioned by the discovery of many small yet dangerous instances of the original paint layers lifting in a part of the painting showing numerous ridges of paint that had been badly compressed and shattered during earlier attempts at restoration, an effect caused primarily by the compression of conflicting forces exercised by the 19th century crosspieces on the painted surface. The brushwork had also been retouched with meticulous care in an earlier restoration project, yet the overall impression one got from the restored work was that of a lack of definition caused by the restorers' superimposition of numerous, if sophisticated, layers of velatura. This impression was further compounded by the deterioration of the varnish, which we discovered to have been very slightly coloured. The painstaking job performed on the picture has now thankfully restored its original and very extensive range of nuanced colours and the perfection of detail impressed by Raphael's own hand on the garments, fabrics and objects depicted in the painting, and it has allowed us to rediscover the feeling of space and the architectural setting that previously appeared to be almost totally flat. The painting's wooden support, which was beginning to show signs of stiffness, was also restored and the crosspiece arrangement on the back was given greater flexibility to allow it to comply with the wood's natural movement over time.

Despite various scholars having suggested over the years that the composition of the painting may originally have been intended to be simply a portrait of Leo X and that the figures of the two cardinals may have been added by a different hand at a later date, we are now in a position to dismiss that hypothesis once and for all. Both the tight network of incisions making up the preliminary grid for the architectural setting and the layer of paint applied over it break off very cleanly when they reach the silhouettes of all three figures, carefully avoiding impinging on the space set aside for the figures. This can only mean that the figures had either already been painted in full or that, at the very least, they had been sketched in as preparatory underdrawings. Reflectographic inspection has shown that Raphael used two different types of underdrawing based on sketches undoubtedly drawn at separate moments when the prelates found the time to pose for him. He used the sketches to prepare cartoons for "transfer" in order to convey the drawings onto the panel, but he then revisited the figure of the Pope freehand, reworking it in great detail (maybe even with the sitter before him) so as to ensure that the pontiff's portrait was as natural and as lifelike as possible.

THE PAINTING AND ITS HISTORY

Raphael's painting reached Florence in early September 1518, in time to be hung "over the table" of the wedding feast celebrating the marriage of Leo X's nephew Lorenzo de' Medici, Duke of Urbino, with Madeleine de la Tour d'Auvergne, thus allowing the Duke's powerful uncle to preside metaphorically over the wedding banquet. Leo is shown in the company of two cardinals, both of them members of the Medici family – his cousins Giulio de' Medici and Luigi de' Rossi – but it is definitely the Pope who dominates the scene in what appears to be a stern, monumental grey stone setting allowing the red, white, gold and silver of the vestments and precious furnishings to catch our eye. Leo X, born Giovanni de' Medici, portrayed in a three-quarter pose, appears to have just finished reading the Bible as he raises his gold-rimmed magnifying glass from the page. This may be an allusion to his shortsightedness but also to his interest in the book, a 14th century masterpiece of the illuminator's art produced in Naples for Queen Joanna I and illustrated by Cristoforo Orimina.
"With these marvellous objects - explained Schmidt - Raphael celebrates not only the supreme office held by his chief sitter as pontiff but also the highly sophisticated taste and culture of a member of the House of Medici, a scholar raised and educated amid the most celebrated art collections of his day, a worthy son of Lorenzo the Magnificent."

The book lying on the table before the Pope is an illuminated codex, a valuable collector's item which scholars have identified as an extremely lavish copy of the Bible now in the Kupferstichkabinett in Berlin but formerly in the celebrated private collection of the Duke of Hamilton. Made in Naples around the middle of the 14th century, it may have been commissioned by Queen Joanna I of the House of Anjou for a member of the French family of Roger de Beaufort (Pierre, elected to the papacy with the name of Clemente VI, or his brother) with whom she entertained both personal and political relations. The illuminations are by Cristoforo Orimina who, with his assistants, ran the most important illuminator's workshop in Naples and was fully up to date with the most recent and important trends in painting, such as the style of Giotto.

Possibly chosen for pro-French dynastic and political purposes to mark the marriage of Lorenzo, the Pope's nephew, and Madeleine de la Tour d'Auvergne, the codex is open on the first page of the Gospel of St. John. 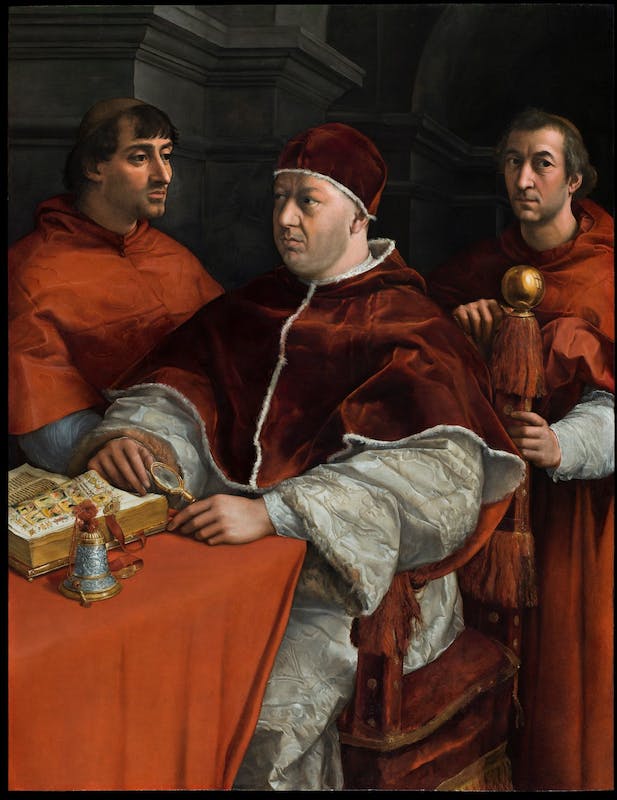 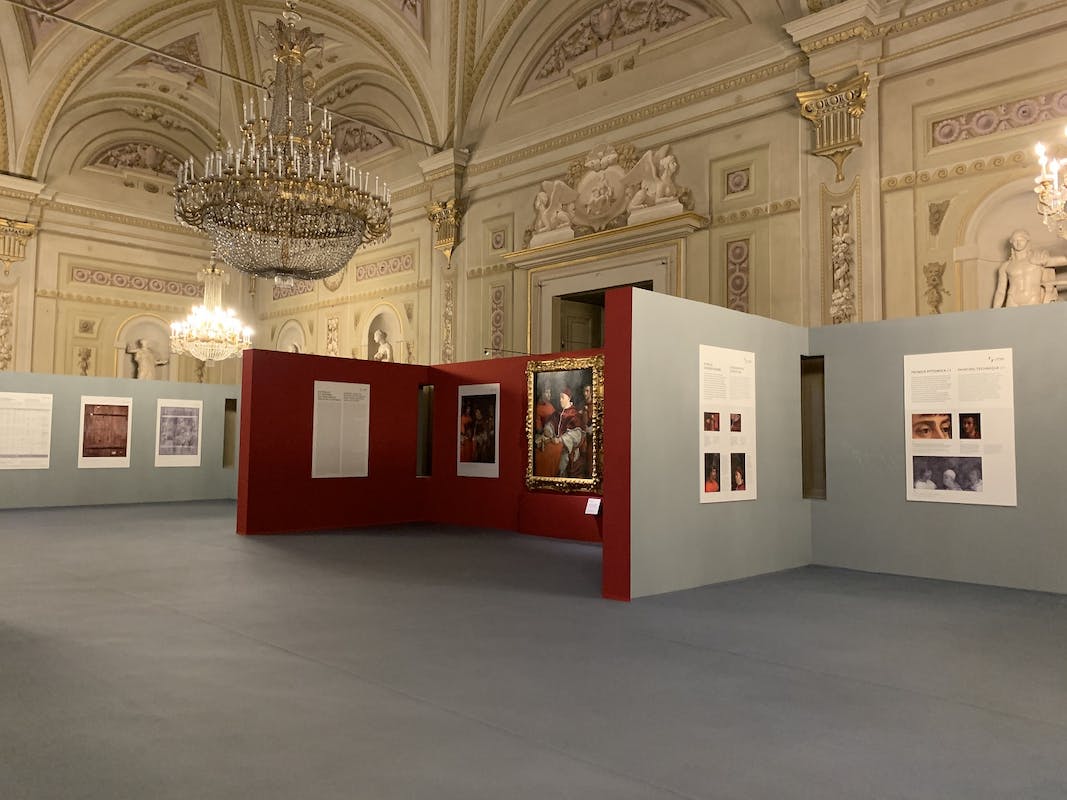 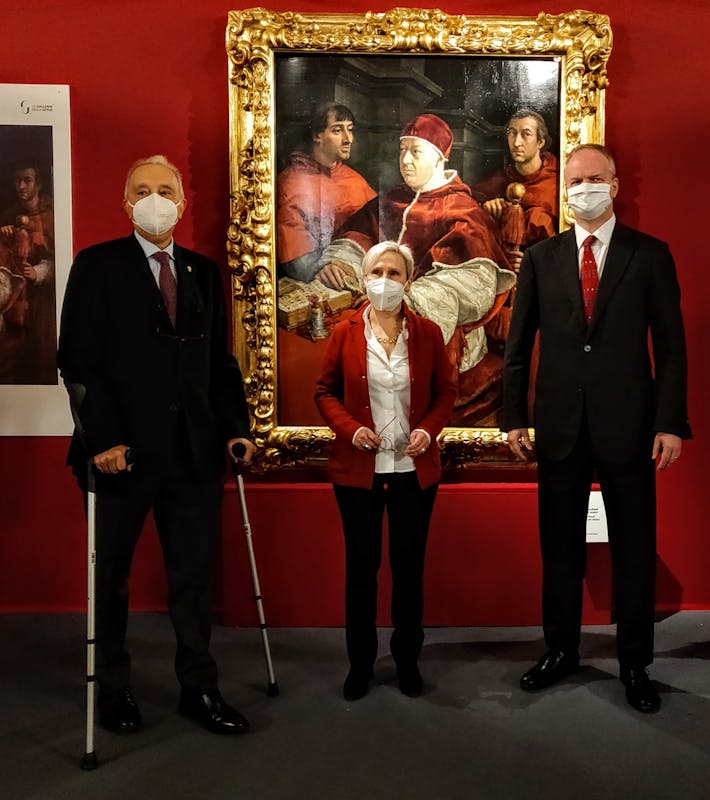 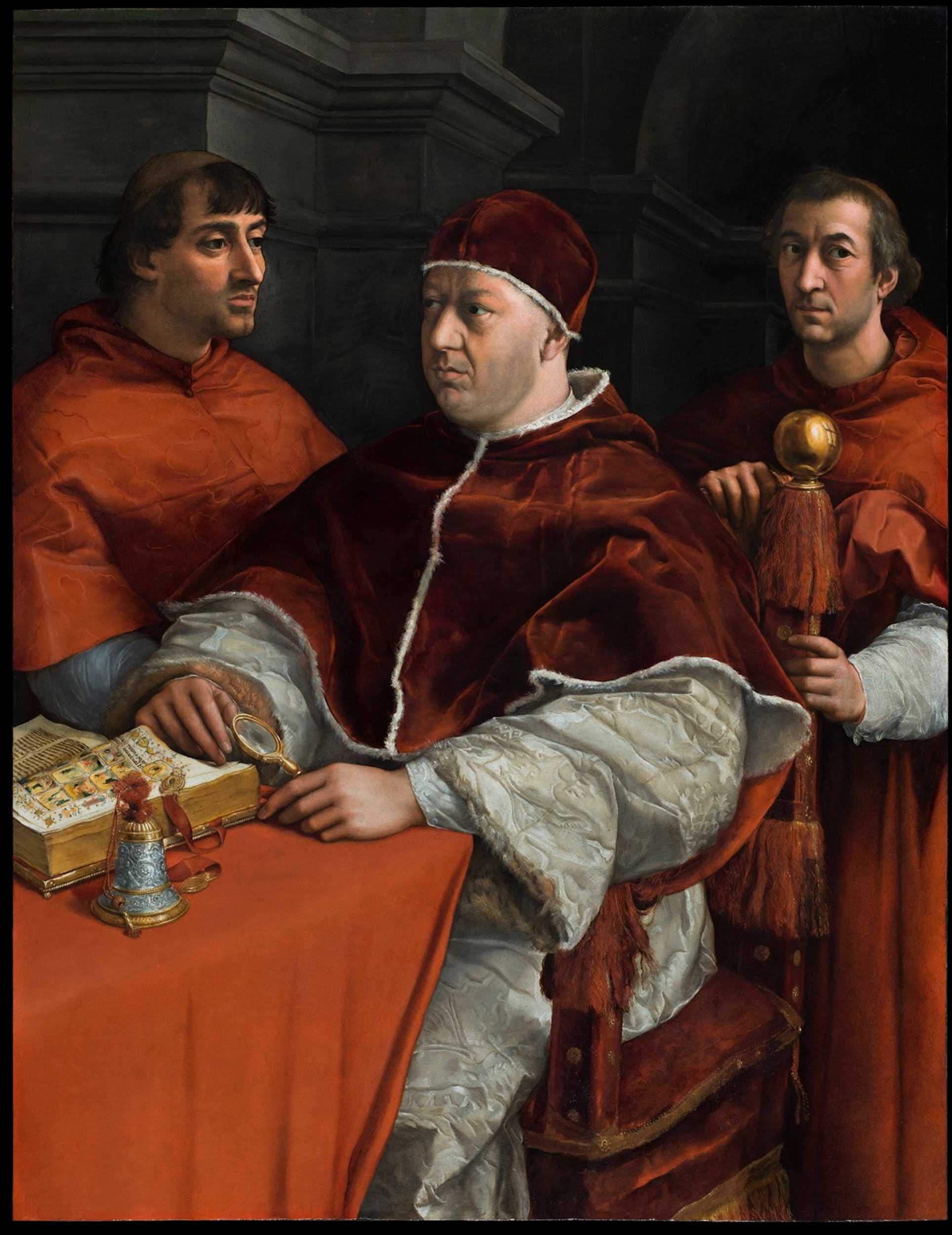 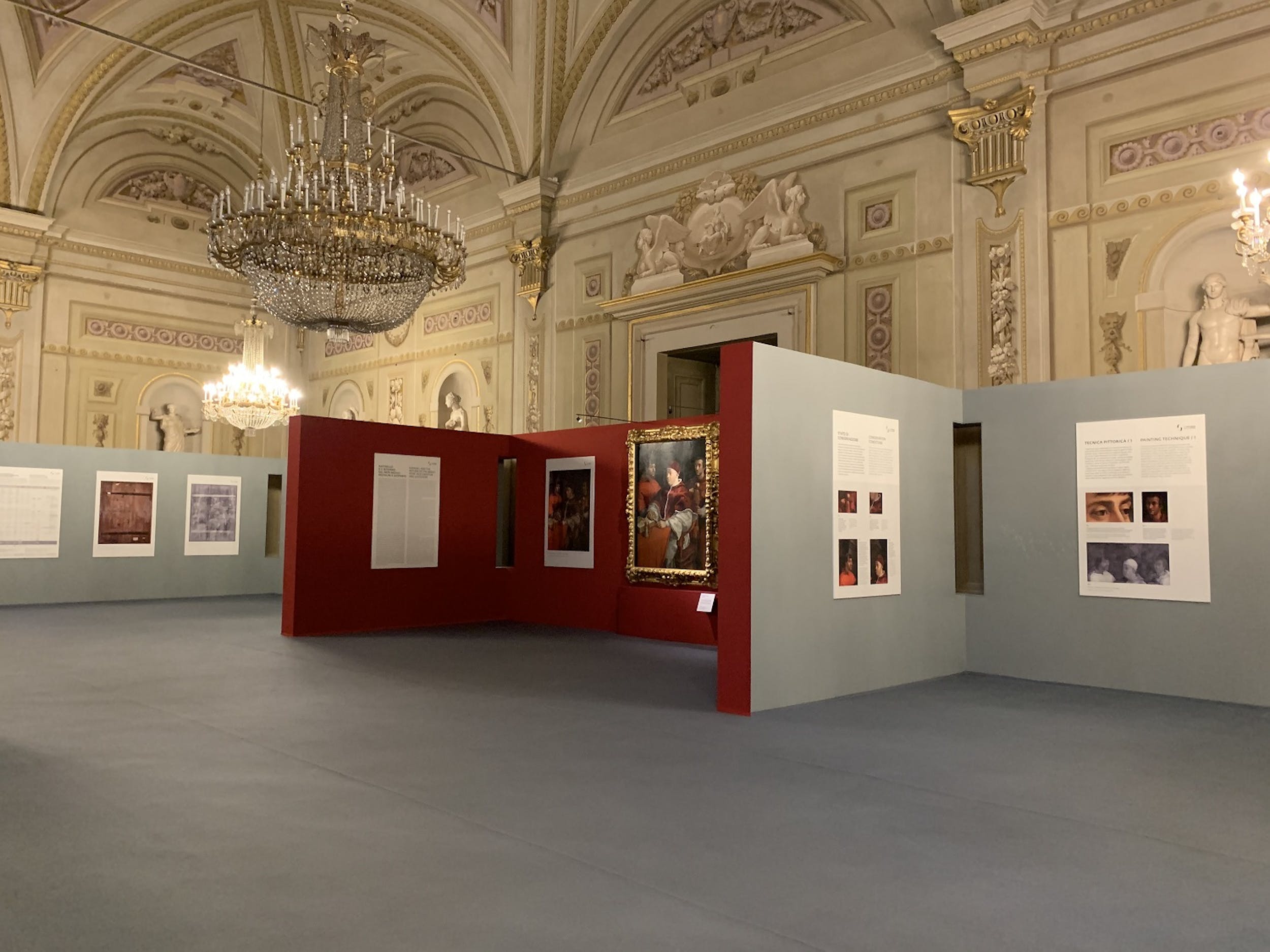 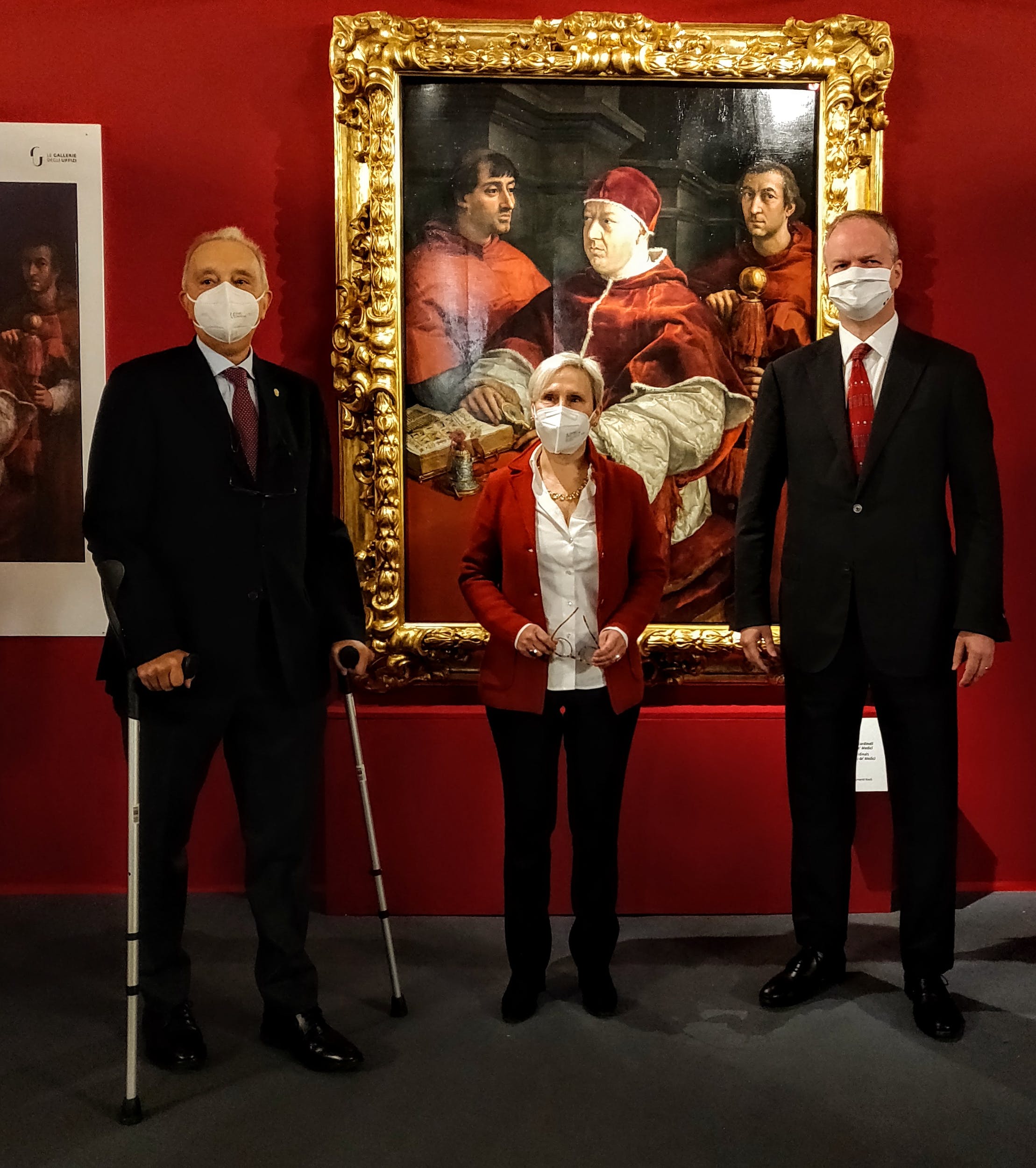