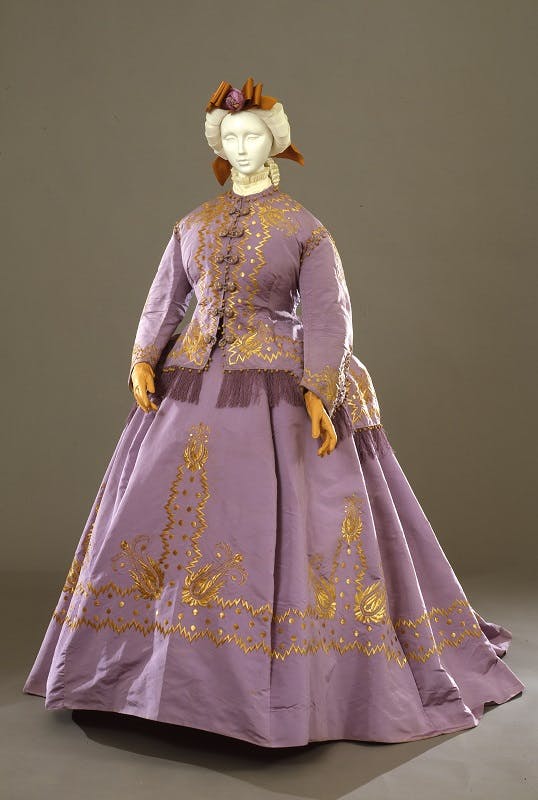 The jacket has a band collar and trimmings in grosgrain ribbon with gold silk thread tassels. The front fastening at the centre has covered, embroidered buttons and frogging in braid.  Long, square sides; tails with central split, and hem with silk fringe.

Boned bodice with boat neck, ruched waist and capped sleeves in taffeta and tulle. Embroidered belt with yellow silk bow at the back.

Skirt made from eight ruched sheets, with diagonal side pockets.

The dress has been altered, reducing the volume of the skirt but keeping the excess fabric inside. Due to the poor condition of this dress, during the restoration process, the excess fabric was recovered from the newer seams. This operation followed the old remaining seams and the design of the embroidery. The precious nature of the dress, as well as the original design and the story of the family to which it belonged, lies in the straw thread decoration, which simulates gold leaf.

A card with the following writing was found inside one of the pockets: “Dress worn by my poor aunt at my wedding on 29 April 1867”; the note is by Maria de’Ferrari, niece of the owner of the dress. She was Baroness Fiorella Favard de l’Anglade, born in Livorno in 1813, and who moved to Paris where she was in attendance at the court of Napoleon III. On her death, she was buried at the family villa, Villa Favard di Rovezzano.

The shape of the dress would seem to reveal that it needs a crinoline, which reaches its maximum extension with the change in shape that increases the volume at the back, while reducing the front.