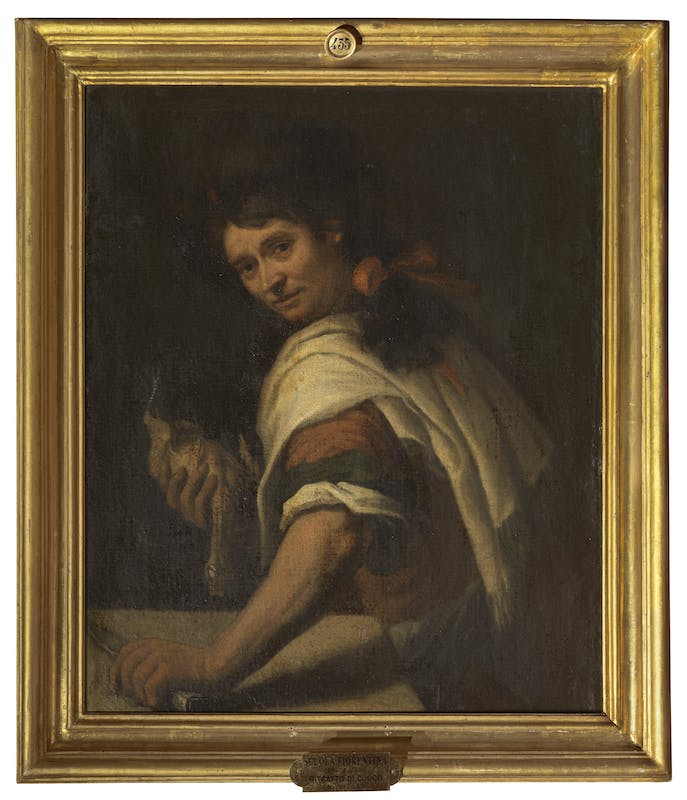 Although this is not one of the famous pieces from the Palatine Gallery, this curious portrait is still worthy of a closer look. The painting is a three-quarter view of a man who faces the onlooker with a interlocutory gaze. In his right hand he holds a plucked chicken, in prominent view, and in his left, the knife he is about to use to gut the bird. The characterisation of his face, clothes and accessories (some of which are only partly visible due to the dark background and altered colours) lead us to consider this a life painting, perhaps of one of the personal cooks to the grand ducal family. The cook has casually thrown a large fringed cloth to protect against stains over an outfit with rolled-up sleeves that leave him free to move. His long hair is gathered in a ponytail, tied with a red string that is carefully knotted into a bow and lastly - a rather curious detail - he is wearing a fur cap on his head

This type of fur hat would seem to identify the character as a Polish cook, mentioned in records as being in the service of Cardinal Francesco Maria de’ Medici, who was notorious for being a gourmet and for choosing his kitchen staff with great care. We should not forget that the cooks hired to direct the private kitchens of various members of the grand ducal family were selected from people who did not come from the Grand Duchy - often French or North European. This was for reasons of safety in a period when intrigues and poisonings were not uncommon. It was in the 17th century that regulations were set out for the organisation of the nobles’ kitchens and the people who worked there, leading to the writing of actual treatises, setting out the organisation of the kitchen staff, where the figures of cook, steward, and cellarman occupied positions of prestige.

This interesting portrait was initially attributed to the Tuscan painter,  Giovanni da San Giovanni, although it has recently been considered a piece by Volterrano - or an artist from his circles - on account of the confident, quick strokes and the nonchalance of the depiction, all of which would seem to indicate the hand of an expert artist.