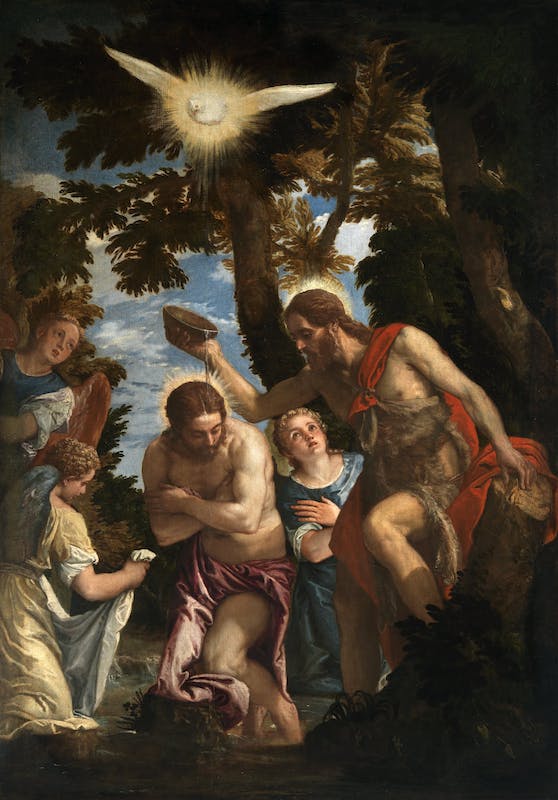 St. John the Baptist is a recurring presence in Veronese’s catalogue, both as a protagonist (as in La Predica at the Galleria Borghese in Rome), a co-protagonist (as in multiple depictions of the Baptism of Christ) and as a prestigious addition to compositions of wider involvement.

When looking specifically at paintings by Veronese that tackle a similar subject, it appears the artist’s intentions with this particular work were to encapsulate his past experience. The artist focuses his attention on the foreground, which is free from structural distractions such as landscapes or client intrusions. The centrality of the Holy Trinity is confirmed by the triad of angels, as well as the extended axis leading from the dove to the baptism bowl and the head of Christ, all of which are also partially linked by a tree trunk. This tells us that Veronese chose to focus on the Baptism of Christ as told by the synoptic gospels, not only eliminating irrelevant details, but also returning to depict Christ stood with his arms crossed, a pose with which he experimented in his youth. This is a very significant detail as it alludes to Jesus’ crucifixion, and reminds us that baptism represents its foreshadowing. By choosing to be baptised in the River Jordan due to its cleansing properties, as John did with his followers, Jesus agrees to share the sins of men, embarking on a path of suffering and redemption that would ultimately culminate on the cross. This fate has already been sealed by the voice of the Father and proclaimed by the descent of the Holy Spirit in the form of a dove, who together along with Jesus, comprise the Holy Trinity, thereby fulfilling John’s prophecy concerning the coming of the Messiah as ‘the one who is baptised with the Holy Spirit and fire.’

The painting was originally kept in the Oratory of the Fiorentini confraternity in Ancona. An inscription on the back tells us that it was repaired due to ‘damage caused by mice, damp, and other disasters.’ In fact, it had already been damaged numerous times by the time it arrived in Florence in 1667, following its purchase by Ferdinando II de’ Medici. The Grand Duke, who was passionate about Venetian painting, assigned it a privileged spot in the Tribuna, but first sent it to Baldassarre Franceschini, AKA il Volterrano, to ‘tidy it up’ and carry out conservative restorations. Franceschini also designed a new frame, which was made by Jacopo Maria Foggini. Shortly thereafter, in 1699, Grand Prince Ferdinand expressed an interest in the painting, wanting it for his collection and commissioning Niccolò Cassana to tighten and stretch the canvas.