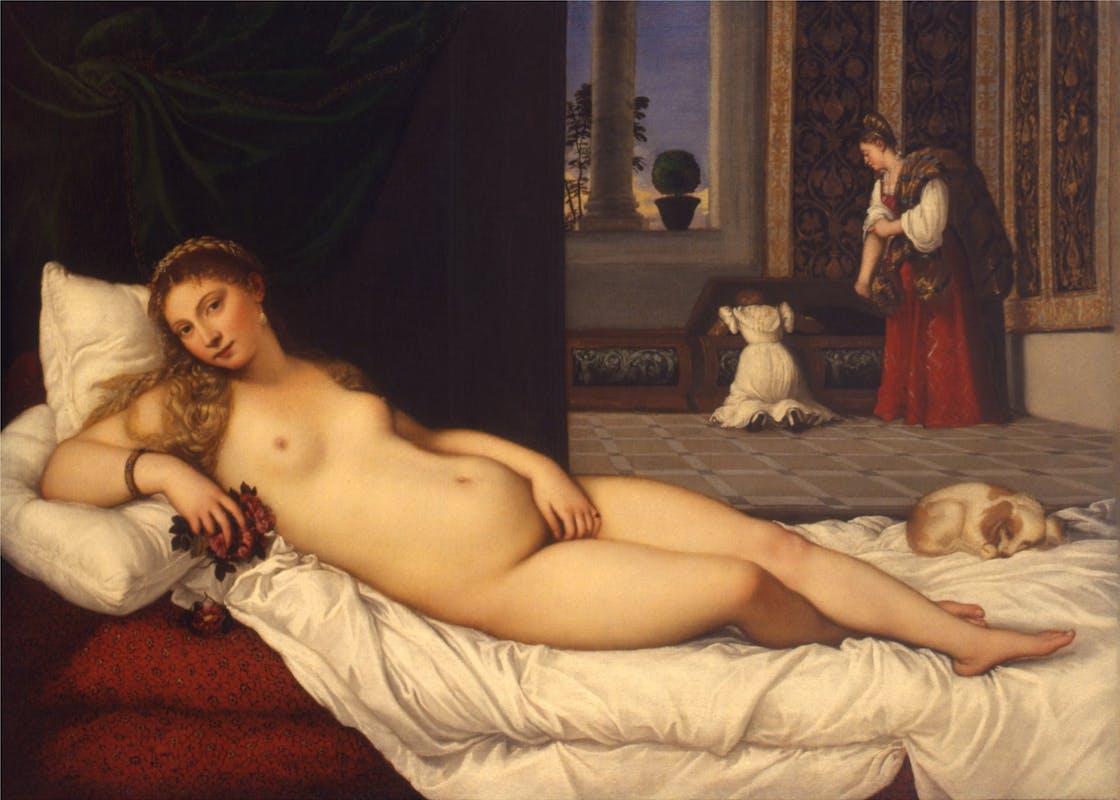 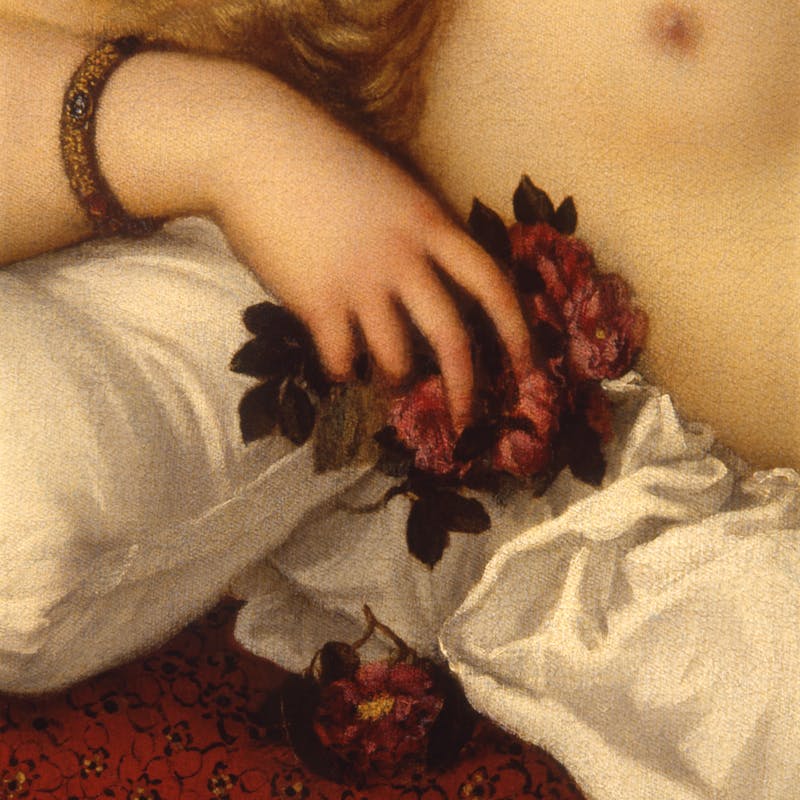 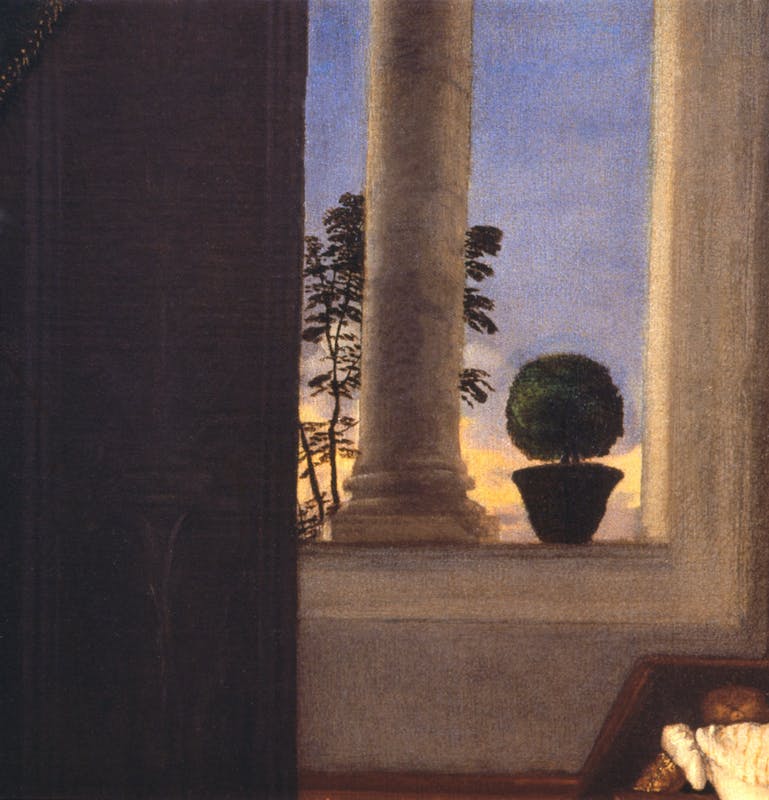 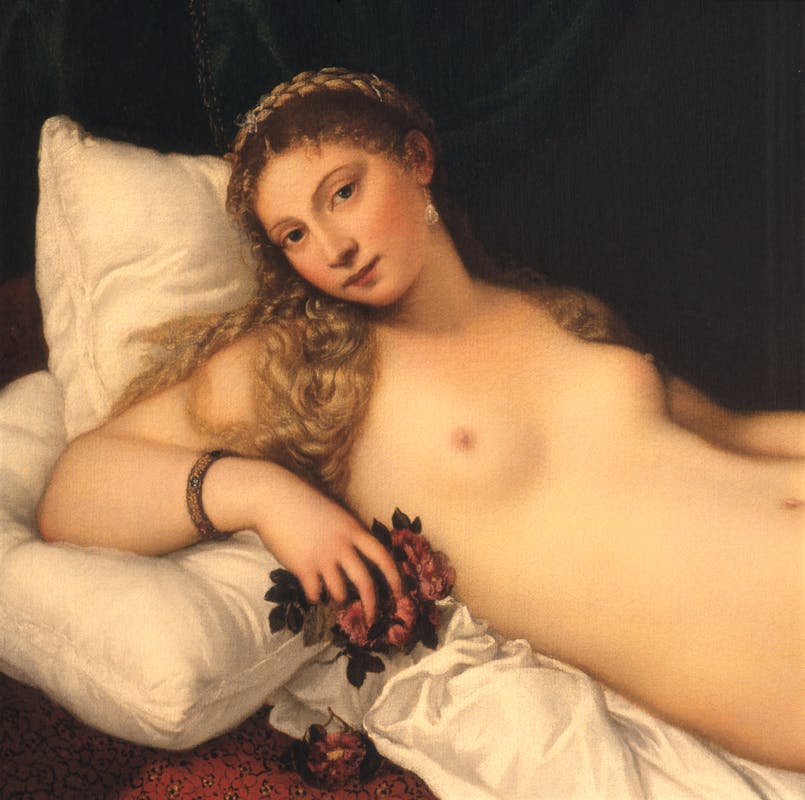 This is one of Titian’s most famous works and it depicts the emblematic figure of a young bride about to be dressed to take part in the celebration of the ritual known in Venice as “il toccamano”. It was a ceremony held in the home and not in church, during which a young woman whose hand was requested in marriage would touch the hand of the groom to express her consent. Titian takes this as his inspiration for a seductive Venus, using an iconography that began in the early Renaissance, inspired by the ancient depiction of the “Venus pudica”.   The girl, lying naked on a bed with crumpled sheets, gazes out at the onlooker in a flirtatious, allusive manner, while hiding her pubis with her left hand and holding a bunch of roses, the emblem of Venus and of the pleasure and constancy of love in her right. At the foot of the bed, the sleeping dog - the same one that appears in another Titian in the Uffizi, the portrait of Eleonora Gonzaga - is a reference to fidelity in marriage. The background shows an elegant room of the kind distinctive to a rich patrician home in 16th-century Venice. There are two maids, one intent on searching in the painted chest from which she has just removed the sumptuous gold and light blue wedding dress that can be seen on the shoulder of the other maid, standing to the right.  On the window sill is a pot of myrtle, a traditional plant linked to Venus, and a further reference to the constancy in love already alluded to by the dog at the foot of the bed.

On this canvas, Titian is able to confirm his extraordinary talent when it comes to conferring intensity and character to his subject, as well as his unmatchable skill in portraying the softness of skin and the quality of materials. As certified in a letter dated 1538, the painting of the “naked woman” was bought directly from Titian by Guidobaldo II della Rovere and it was taken to Florence as part of Vittoria della Rovere’s dowry, the last member of the family and wife of Grand Duke of Tuscany, Ferdinando II de’ Medici. For many years, the painting was on display in the Tribuna degli Uffizi, close to the Medici Venus, probably as an intended comparison between the two provocative beauties: the classic, idealized ancient statue, and the modern, carnal painting by Titian.

Venus of Urbino by Titian

Uffizi for everyone - Internationl Signs Video | Titian, Venus of Urbino, 1538

This is one of Titian’s most famous works and it depicts the emblematic figure of a young bride about to be dressed to take part in the celebration...