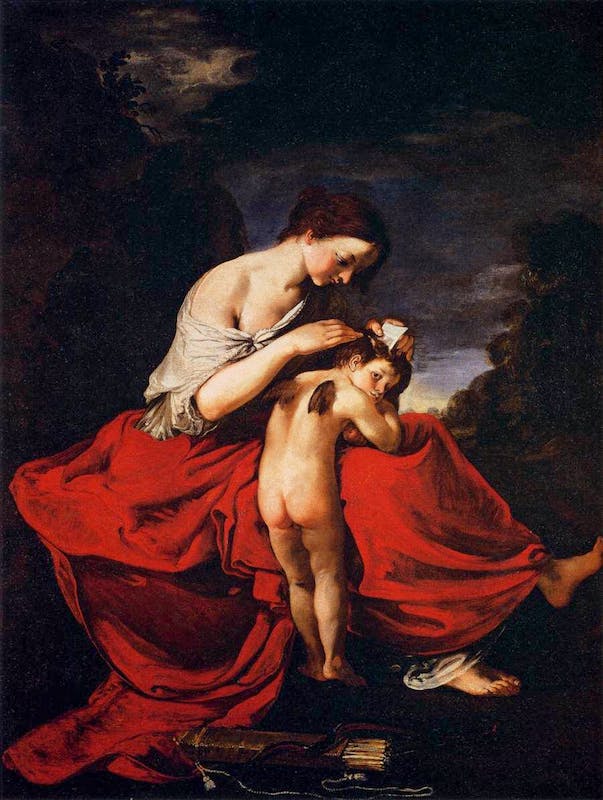 The painting offers one of the most original representations of Venus in the figurative arts. The goddess of love sits in the middle of a dark, rocky landscape and, like a caring mother, combs her son Cupid's thick hair with a fine comb, in search of lice. The scene, apparently permeated by domestic and affectionate simplicity, was probably supposed to conceal a more irreverent meaning. In fact, in the words of 17th-century biographer Filippo Baldinucci, which leave no doubt, the painting caused a certain scandal because of its subject matter: "... In one painting he portrayed Venus as she combed the hair of her little son, Cupid, responding wittily, as was his way, to the strong criticism of those who believed his subjects too vile and sordid. Using witty retorts that were sharp, but delivered in such a way as to describe the scene with offending common decency...". Therefore, the witty touches with which the painter enriches the scene are not surprising: the shirt sensually slung over the shoulder of Venus and Cupid - the latter only distinguished from a naughty child by the two wings pinned on his shoulders - which reveals his back. In 1769, the painting was inventoried in the Uffizi under the title 'Venus delousing Cupid', a title that in later years became 'Venus combing Cupid’s hair' or even 'Motherly Affection'.

The work, certainly commissioned by the Medici, is described for the first time in an inventory dated 1637 of the villa at Mezzomonte owned by Prince Giovan Carlo de' Medici, and it remained in the prince's possession until his death. This documentary evidence contradicts Baldinucci's biography, which refers to the painting as having been commissioned by Prince Don Lorenzo de' Medici, but confirms the appreciation of this artist by various members of the family. Giovanni da San Giovanni received commissions for both paintings on canvas and frescoes from Princess Cristina of Lorraine, from the aforementioned princes Don Lorenzo and Giovan Carlo, and from the Grand Dukes Cosimo II and his son Ferdinando II, who commissioned his most prestigious undertaking, the decoration of the Sala dell'Udienza in the Summer Apartment in Palazzo Pitti.