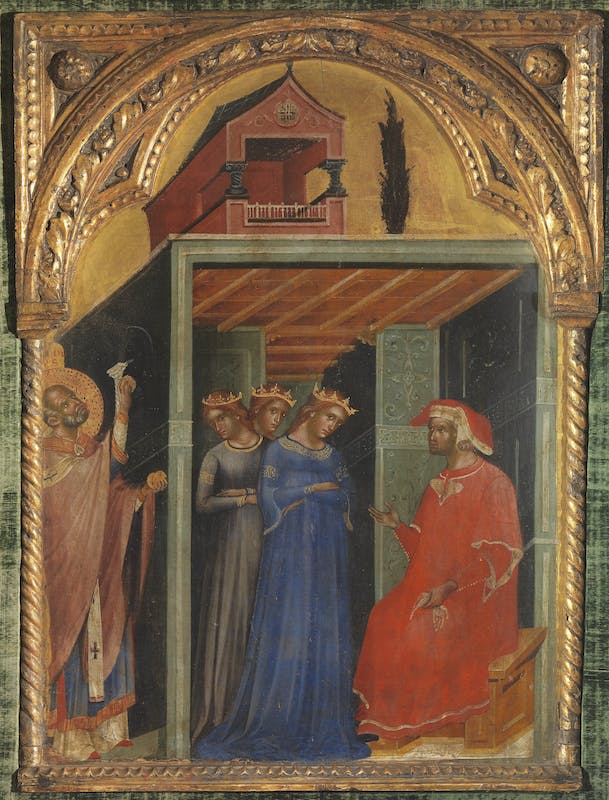 This work of art depicts one of the better known miracles of Saint Nicholas. The saint is shown giving a few pieces of gold to the daughters of a man who has become destitute – and who, unable to marry off his daughters without the necessary dowry – must sell them into prostitution. The saint is dressed in priestly robes and is depicted secretly tossing three golden balls through a window so as not to get recognition and gratitude in the earthly world, but the approval of God. The high social status of the family rescued by Saint Nicholas is reflected by the sophisticated clothes worn by the daughters and their father. The young women wear tiaras on their heads and the man wears a scarlet robe, headdress, and gloves.

The panel, together with the compartment showing the Birth of Saint Nicholas (Contini Bonacossi Inv. No. 6), was probably part of an altarpiece dedicated to the holy Bishop of Myra (270-343), whose relics have been kept in Bari since the eleventh century.

The two panels are attributed to the most important painter working in Venice in the first half of the fourteenth century, Paolo Veneziano. The painter successfully manages to reconcile Byzantine traditions rooted on the Adriatic coast with Giotto’s innovative representations of space and volume, as is evident in the box-like architecture within which the scenes are set. The events are cleverly narrated by the figures’ gestures and the accuracy of their carefully depicted garments, which follow fourteenth-century fashions.

The two panels have occasionally been linked to a painting intended for the chapel of St. Nicholas in the Doge's Palace in Venice, for which Paolo Veneziano was paid in 1346. The work was destroyed in a fire in 1483 and the two scenes are said to be the only surviving fragments.

Purchased by Alessandro Contini Bonacossi in 1925, the panels previously belonged to the Achillito Chiesa Collection in Milan.