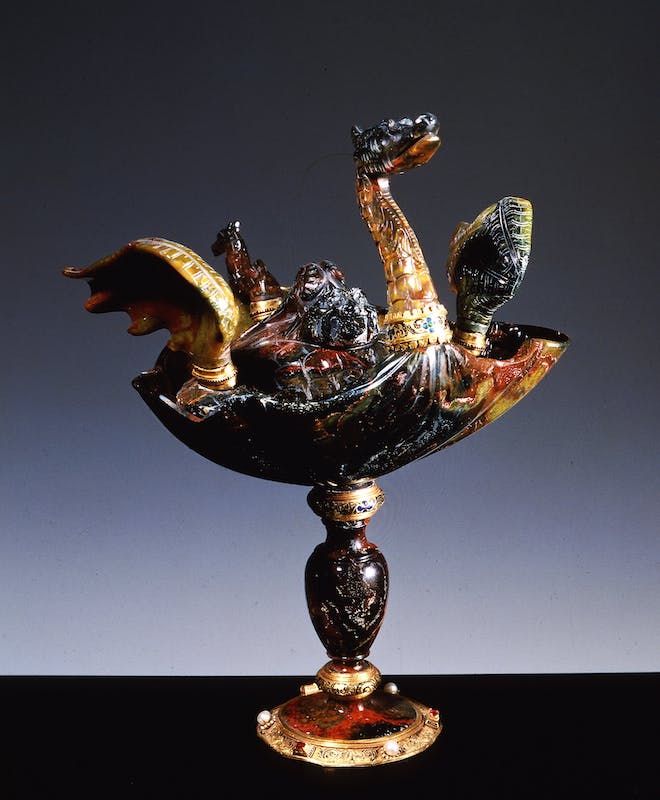 The vase stands on a circular foot, with engraved gold band and enameled racemes, decorated with three pearls and three rubies. The stem, which has two connecting joints in gold, decorated with floral motifs in opaque and translucent enamels, supports a shell-shaped cup with an elaborate dragon-shaped lid, with head, wings and tails carved all round and secured to the body with gold ligatures.  The dragon’s back is carved with another fantastic animal in relief. It is similar to a dolphin and acts as a handhold on the lid.

This piece is mentioned for the first time in the inventory of the Tribuna of the Uffizi dating back to 1589, where it is described as “A vase in Oriental jasper with a lid that makes a dragon, with neck, wings and tail of the item and a dolphin in the midst of the lid of the item, with its foot on the stem of the vase, all garnished in enameled gold with eight rubies and six pearls on the lid, eight rubies and four pearls on the foot, and 4 more rubies on the stem”. Like other precious pietra dura items belonging to the Medici collection, this item was also placed in one of the two secret cabinets that opened along the side walls of the Tribuna, the Medici’s veritable treasure trove of art. The vase remained in this sumptuous setting until 1780-1782, when it was taken to the new Gem Collection, now the Room of Miniatures, set out in the last room, going towards to the Arno, in the first corridor of the Gallery.

This elegant piece is thought to be the work of the Saracchi workshop in Milan. Expert crystal cutters and goldsmiths, the Saracchi brothers (Giovanni Ambrogio, Simone, Stefano, Michele, and Raffaello) were engaged in creating elaborate vases with extravagant shapes of birds, fish and fantastic animals that were greatly appreciated at the elegant Italian courts of the Gonzaga, Medici and Savoy families. As well as this piece, the treasury of the Grand Dukes contain other examples that can be traced back to the same workshop, many of which were probably made on the occasion of the wedding of Ferdinand I and Christina of Lorraine.