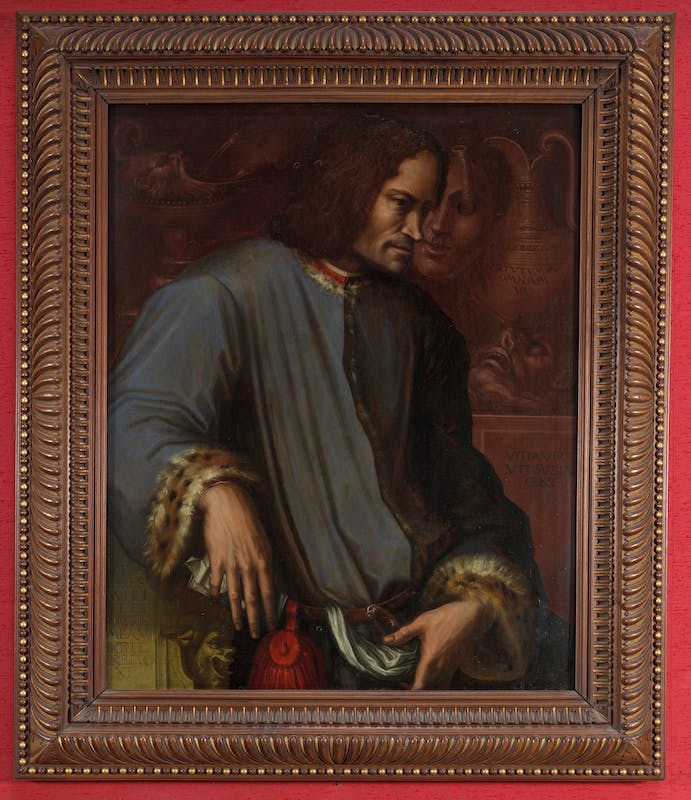 Giorgio Vasari made a significant contribution to the creation of the posthumous image of Lorenzo de’Medici as a shrewd, cultured patron. He described him several times in these terms in his work The Lives of the Most Excellent Painters, Sculptors, and Architects, and celebrates him in the same way in the frescoes in Palazzo Vecchio. He was commissioned to paint this portrait by Ottaviano de’ Medici, by request of the Duke Alessandro, who intended to commemorate his illustrious ancestor, and at the same time legitimise the family’s return to power after the republican period.

Vasari himself, in a letter to the Duke, stated that, when painting Lorenzo, he would surround him with all those “ornaments” that could “illustrate the great qualities of this extremely rare, very unique citizen”. His careful description of the painting enables us to identify all the elements of its allegorical meaning, and the iconographic complexity of this was probably orchestrated by Paolo Giovio, the painter’s advisor and friend. Giovio, a learned historian and biographer, believed that a portrait should be accompanied by inscriptions with sententious phrases or praise that would help characterise the subject, a principle that he would follow when creating his famous “gallery of the illustrious” in his palace in Borgo Vico, on Lake Como.

Vasari conceived this portrait of Lorenzo de’Medici as a pendant of Pontormo’s portrait of Cosimo the Elder, with the pose adopted by Lorenzo mirroring that of Cosimo.

Lorenzo is depicted wearing the clothes he wore at home, as per the commissioner’s wishes, but the fur lining on his sleeves is an indication of the subject’s high social standing. He is leaning on a marble pillar decorated with a mask in relief. The Latin inscription reveals its meaning: “As my ancestors did with me, I too, with my virtue, shall light the way for my descendants”. An ancient-style oil lamp, consisting of a porphyry base topped by a bizarre mask, sits on top of the pillar. Vasari clarifies how it works: the oil falls on to the forehead of the mask, gushing forth from the horns to fuel the papyrus wick protruding from the mask’s wide, open mouth. He explains that, just as the function of the papyrus was to light up everything around it, in the same way, the eloquence and wisdom of Lorenzo indicated the path for his descendants to follow. On the right, there is another marble base, on which we read “Virtue triumphs over vices”. Vice is symbolised by the monstrous mask laid on top of the pillar and squashed by a finely sculpted vase, identified by the inscription as “the vase of all virtues”. Another mask is hanging on the spout of the vase, and this one is defined by Vasari as “clean and very beautiful”; the reward of all virtues”.

Therefore, we see that by exercising virtue, Lorenzo has been remembered and praised by his descendants as an excellent, pure soul. The flame of his qualities, inherited from his ancestors, has been handed down to his successors, legitimising them to become the lords of Florence.