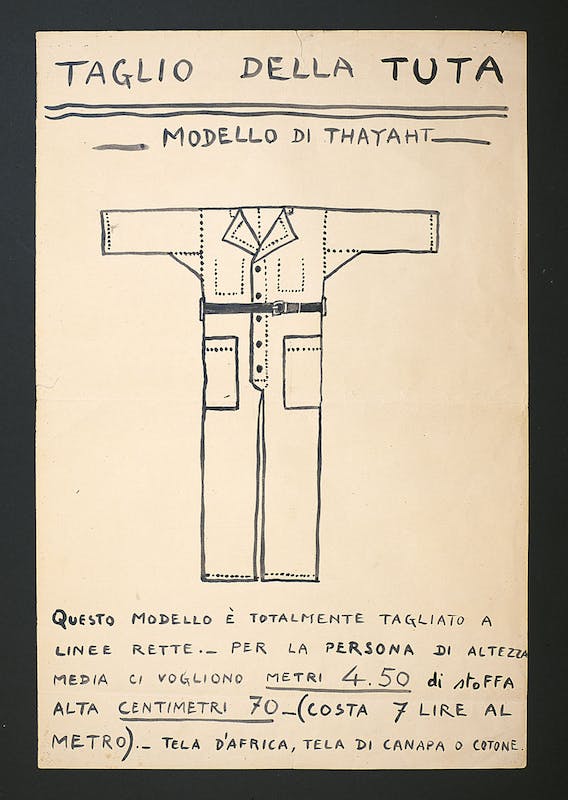 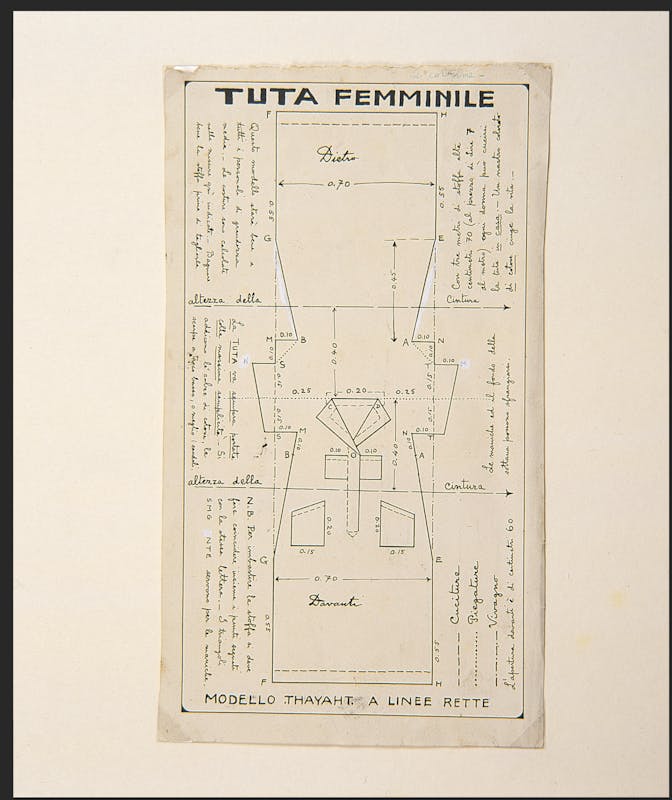 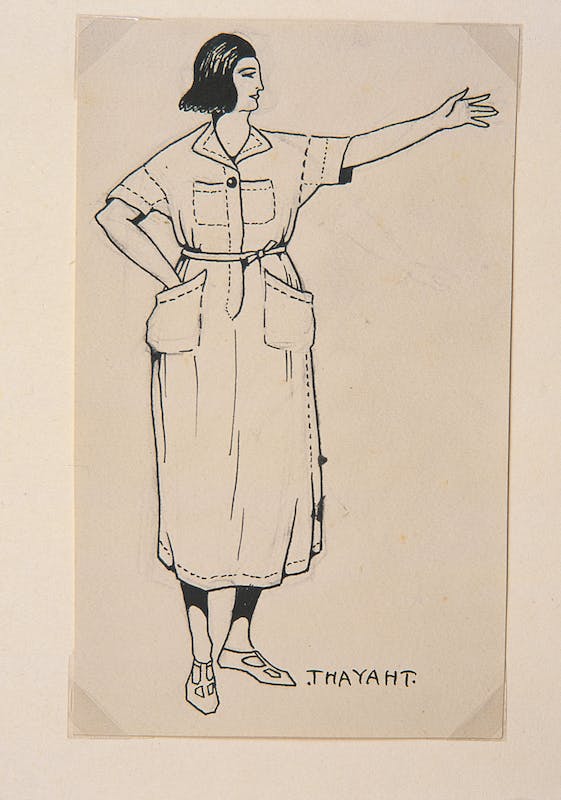 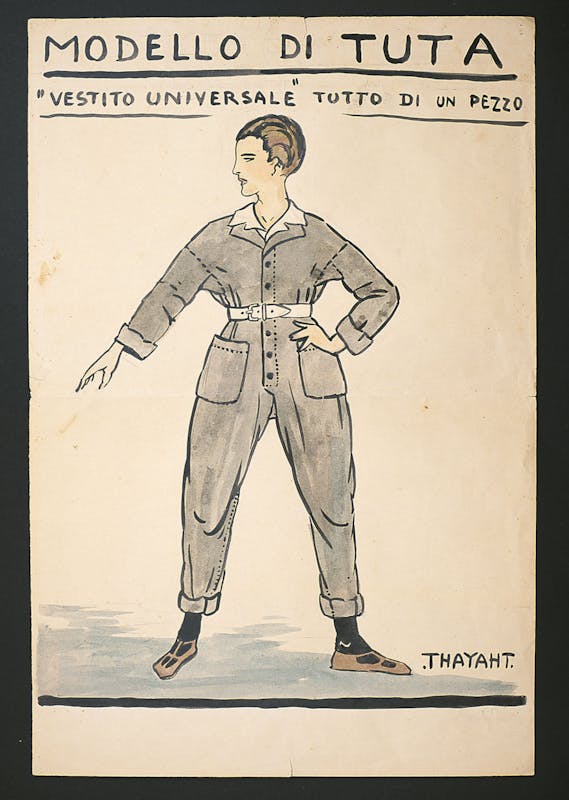 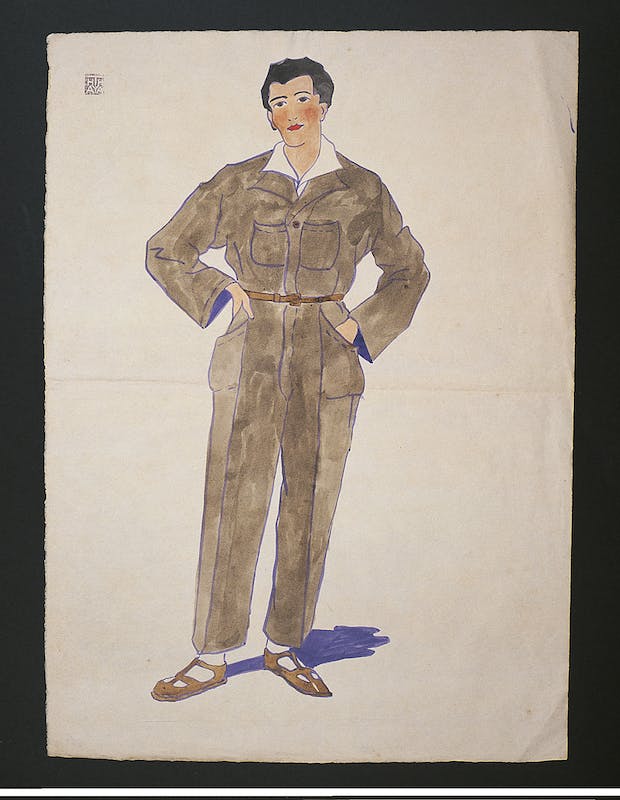 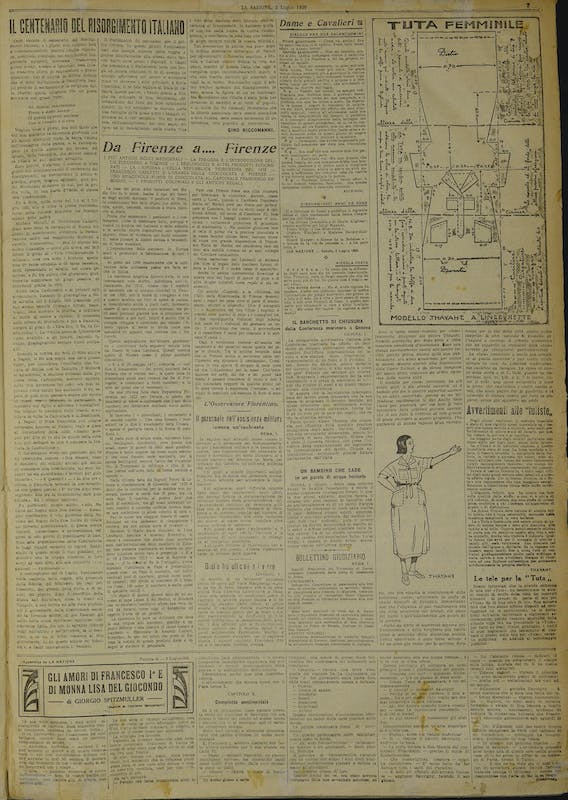 Between June and July 1920, the columns of the daily newspaper “La Nazione” were used to the launch of the Trouser suit, garment designed by Ernesto Michahelles, also known as Thayaht, a multi-talented and cosmopolitan artist based in Florence. In that invention, he managed to perfectly photograph and translate the historical background and aesthetic trends of his time. “One day, when passing through Via Orsanmichele, in a shop window [of the Castagnoli store, Ed.] I saw some cheap cotton and hemp fabrics in bright colours. I took a few samples and set to work”: in this way, Thayaht remembers the spark that inspired the idea, corroborated by the know-how he had accrued in the months spent working alongside French designer Madelaine Vionnet, known for her “bias cuts”. For Vionnet, he had designed clothes, decorative objects for interiors, jewellery, ex libris. Aided by his brother Ruggero and a few friends who were tailors, Thayaht designed the first trouser suit pattern. It makes a strong impression not so much for its originality, since it had, in fact, been anticipated in the 19th century by other prototypes, but for the modern feel of the design, as well as for the widespread marketing operation used to advertise it, starting precisely in the pages of “La Nazione”. In fact, this was where the patterns were published for those who wanted to make the garment at home (on 17 June the men’s trouser suit and on 2 July the women’s version), and the first 1000 readers to pay an extra 50 cents would also receive a printed pattern. The Trouser suit was immediately a roaring success with a selected upper middle class and aristocratic clientele, in line with the non-conventional and dandy interpretation offered by Ernesto himself, who loved wearing it, matched with sandals from Florence (the T-bar variety) or from Forte di Marmi (with simple straps), always without socks. An elite context opposed to the idea of homologation with which most people usually associate the trouser suit but which, in the end, was not extraneous to Thayaht either, who never missed a chance to emphasise its “universal” nature. Playing around with the root of the name “tuta” coined by Thayaht for the garment, he prophesised that soon “everyone (Italian, the word for “everyone” is “tutta”, Ed.) will be wearing a trouser suit (“tuta” in Italian, Ed.)” and so extended his proposal to children and older people too, for whom he created the two-piece trouser suit. On the other hand, the mass adoption of this garment would bring many benefits: it saved fabric, an advantage in the post-War period when the cost of living was high – “all the fabric (4.50 metres, height 0.70) is used and not even a slither is left over” –, it was easier to manufacture – “it is a one-piece garment with minimum stitching” –, it was quicker to put on – “it clothes the whole body: with just seven buttons and a simple belt you’re ready to go” – and finally, it saved energy, thanks to the sense of wellness and the full freedom of movement it ensured to those who wore it (Tips, “La Nazione”, 17 June 1920). We can see what became of the missing consonant in Thayaht’s pun (“tuta” and not “tutta”) in this sketch, which is part of a collection of papers, all dedicated to the design of the Trouser suit, purchased in 2001 for the Museum of Costume and Fashion. Indeed, the pattern is clearly T-shaped and features a “square cut” that blends aesthetics with functionality, wavering between Déco taste and Bauhaus proposals, between craftsmanship and industrial production.