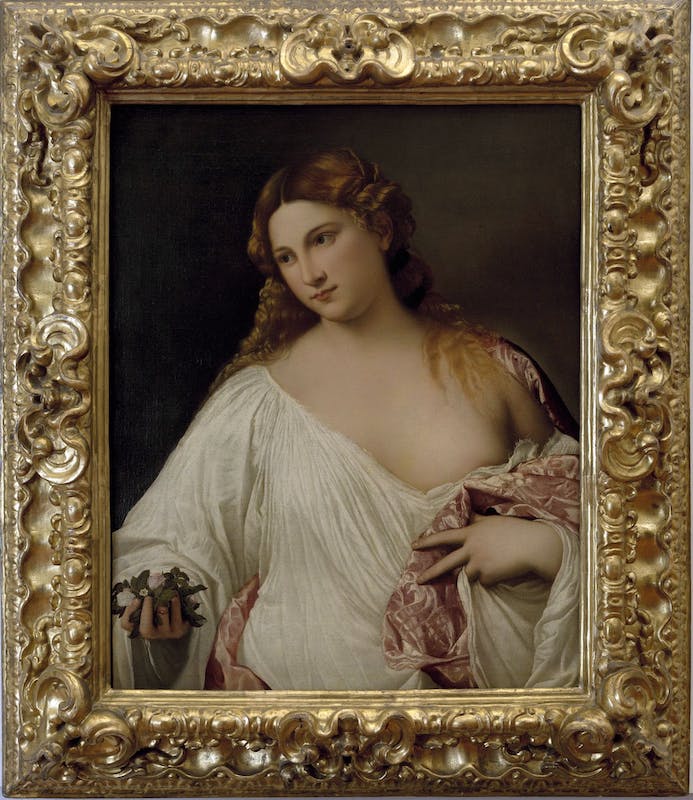 A young woman emerges from the brown background of the painting, holding out a bouquet of spring flowers, consisting of violets, rosebuds and jasmine. She is dressed in ancient style, with a bright white robe that slides down over her right shoulder, offering a glimpse of her breast, while her head gently rests on her left shoulder as she gazes outside of the painting. Her face, with its delicate features, meets all of the cannons of 16th-century Renaissance beauty: luminous pale skin, pink cheeks and a face framed by loose long, copper blonde hair - the typical hair colour of women painted by Titian (hence the term “Titian red”).

The subject has been identified as “Flora”, the nymph bride of Zephyr, whose story is Greek in origin, told to us by Ovid. This identification dates back to Joachim von Sandrart, Dutch historian who saw the work in around 1635 in the collection of don Alfonso Lòpez, Spanish ambassador in Amsterdam. Don Alfonso Lòpez sold the painting to Archduke Leopold Wilhelm of Austria, and it was taken to Florence in 1793 as part of an exchange of artworks between the Imperial Belvedere Gallery in Vienna and the grand dukes of Tuscany. The fame of this painting is shown by the many engravings made of it from the 16th century onwards.

The painting is part of the research into the image of feminine beauty that began at the start of the century by  the “Laura” by Giorgione, dated 1506 and now in the Kunsthistorisches Museum, Vienna. On a par with other depictions of women of a particular beauty and sensuality, which form a subgenre of painting, established around Venice and known as the “Belle” [Beauties], the image is not an unequivocal allusion to Flora, animator of the licentious celebrations of Ancient Rome, but rather to feminine beauty, able to combine modesty and voluptas.