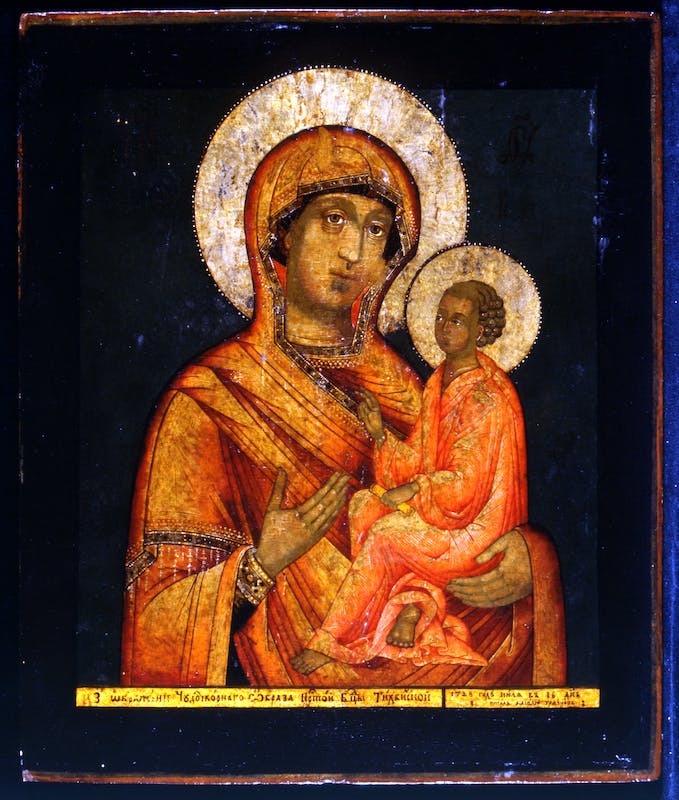 At the sides of the halo of the Mother of God: “МР ΘУ”

(depiction of the miraculous image of the holy Tikhvin Mother of God. Painted by Vasilij Grjaznov on 16 July 1728)

The icon is a replica of the effigy of the Tikhvin Mother of God, miraculous icon of the Virgin - an acheiropoieton, or, according to another legend, painted by Luke the Evangelist - which is said to have travelled miraculously from Constantinople to the river Tikhvinka in the Novgorod area at the end of the 14th century. The icon reproduces the Byzantine style of the Hodegetria, that is, as She who shows the way: the Virgin is pointing at Jesus with her right hand, as she looks at the spectator. The Child is blessing his mother and in his other hand he is holding the scroll of Holy Scriptures, while crossing his legs to reveal the naked sole of one of his feet, perhaps a reference to a passage from Genesis. (3:15): “And I will put enmity between you and the woman, and between your offspring and hers: he will crush your head, and you will strike his heel”. The icon, today preserved in the Dormition of the Mother of God cathedral in Tikhvin, is said to have been responsible for many miracles, including the liberation of the city of Tikhvin from the siege of the Swedes in 1613. In the 17th and 18th centuries, it was one of the most venerated holy images in Russia and many replicas were made, including the example in the Uffizi Gallery. The Florentine icon bears the name of its painter, Vasilij Grjaznov, and the date, 16 July 1728; it is the only dated icon in the collection. The date is written in Arabic numerals, according to the Julian calendar introduced by Tsar Peter the Great (1672 -1725), a rather exceptional action at the time among the provincial masters. The fact that it is signed could be the result of the characteristic attempts of the age of Peter the Great to exercise control over the quality of icon paintings.

We know that Vasilij Grjaznov also painted another icon of the Virgin, dated 1724, conserved in the Vladimir-Suzdal museum in Vladimir.

The icon came to Florence during the time of the Habsburg-Lorraine dynasty, prior to 1771.