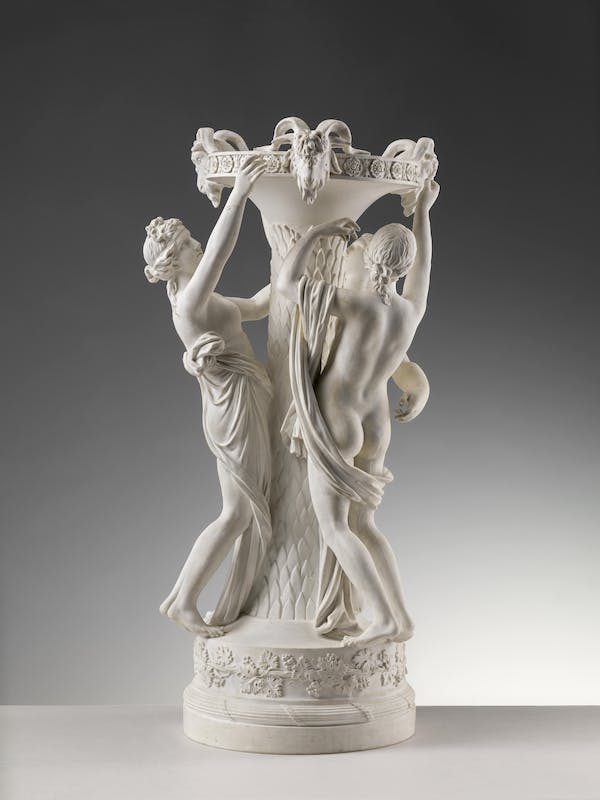 The impressive centrepieces portraying scenes with mythological subjects evoke the luxurious bronze statuettes that decorated tables from the 17th century to the beginning of the 18th century, narrating, for example, religious episodes, or drawing inspiration from Ovid’s Metamorphoses. One famous example is the story of the wedding of Maria de’ Medici with King Henry IV of France in 1600, where Filippo Buonarroti describes the decoration of the banquet with the Labours of Hercules created by Giambologna in silver.

In the period when the Imperial Porcelain Manufactory of Vienna was managed by Conrad von Sorgenthal (1784-1805), it focused on the production of sculptural groups, and this period coincided with the appointment of Anton Grassi as head modeller in 1784. He was the one responsible for inventing these compositions destined to decorate the dessert table, featuring groups in the centre surrounded by tiny figures representing the subjects of genre painting. In some cases these alluded to the Seasons, such as in the dessert service purchased by the Grand Duke Pietro Leopoldo, which was paired both with this group of the Three Graces and with other sculptures also conserved with the tableware in the Porcelain Museum (inv. A.c.e. 1911 nos. 710-726, 143-144, 152, 160, 151, 166).

The sculptural groups reflect the neoclassical taste, also in the choice of the biscuit technique to fire the porcelain (a single-firing process at 1400° C), which visually highlights the purity of the marble. Between 1792 and 1794, Anton Grassi was sent both to Florence to copy works conserved in Palazzo Pitti and the Uffizi, and also to Rome and Naples, where he came into contact with ancient art, the essence of which he then skilfully reproduced in his compositions, together with a French influence. And in fact the Manufactory of Sèvres was the first to use the biscuit technique in the production of sculptures.

The group with the Three Graces, namely Aglaea, Euphrosyne and Thalia, maidservants of Venus and daughters of Jupiter, is inspired by an ancient marble piece that was conserved in Villa Borghese in Rome at that time, made known by Giovan Battista Piranesi’s engraving contained in the printed catalogue Vases, Candelabras, Memorial Stones, Sarcophagi of 1778. Unlike other sculptures destined to adorn the table of Pietro Leopoldo (inv. A.c.e 1911 no. 217, 639), this one has the characteristics of a centrepiece where the “basket” decorated with goat protomes may have been used as a container for arrangements of fruit or flowers.