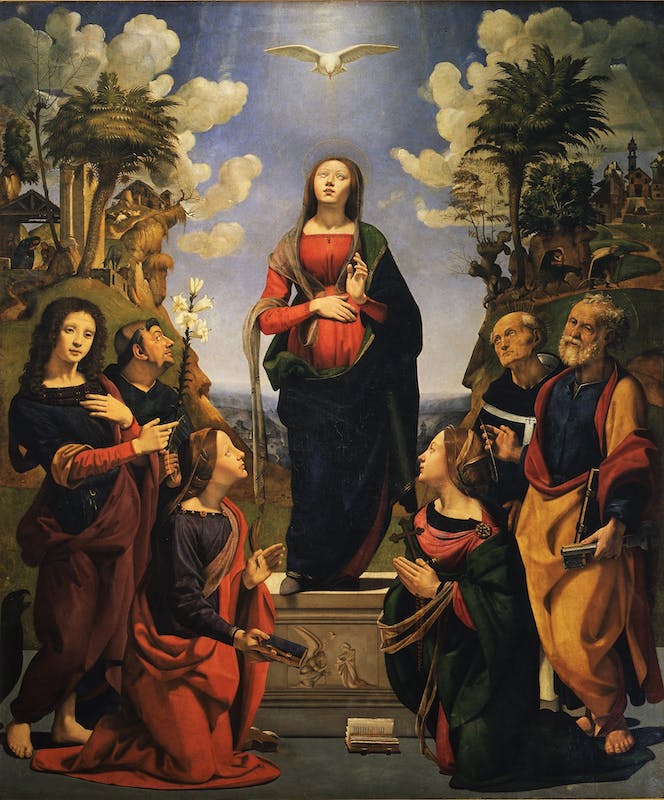 Mary, the visual centre of the composition, is portrayed standing on a sort of altar, while she places her hand on her pregnant belly and gazes ecstatically up at the Holy Spirit who is coming down to her in the form of a white dove. A bright, crystalline light emanates from the dove and illuminates the faces of the six saints who, with their carefully differentiated, readily identifiable features are contemplating the Virgin. Those closest to her are the bishop of Florence Antoninus Pierozzi and Philip Benizi, founder of the Order of the Servants of Mary. The panel is from the order’s Santissima Annunziata church in Florence. The backdrop is a fairy tale-like landscape and two episodes from the infancy of Jesus are set on the hills, on the right, the Nativity and on the left, the Flight into Egypt. The painter pays homage to the friars with the representation of the Montesenario Sanctuary, the first settlement of the order, on a hill near Florence. Piero di Cosimo provides proof of his virtuosity by inserting elements of naturalism inspired by Flemish painting, such as the open book resting on the ground.

The work was commissioned by the Florentine Tedaldi family for their chapel dedicated to Saint John the Evangelist in the Santissima Annunziata church; the apostle is depicted on the left of the painting, with the customary eagle next to him, together with Philip Benizi, of whom some relics are preserved in the chapel. More than a century later, in 1670, Cardinal Leopoldo de’ Medici, refined collector, obliged the Tedaldi to give him the painting by Piero di Cosimo, taking advantage of the restoration works of the chapel undertaken for the canonization of Saint Philip Benizi.

The Incarnation of Jesus by Piero di Cosimo

The Assumption of the Virgin by Andrea del Sarto