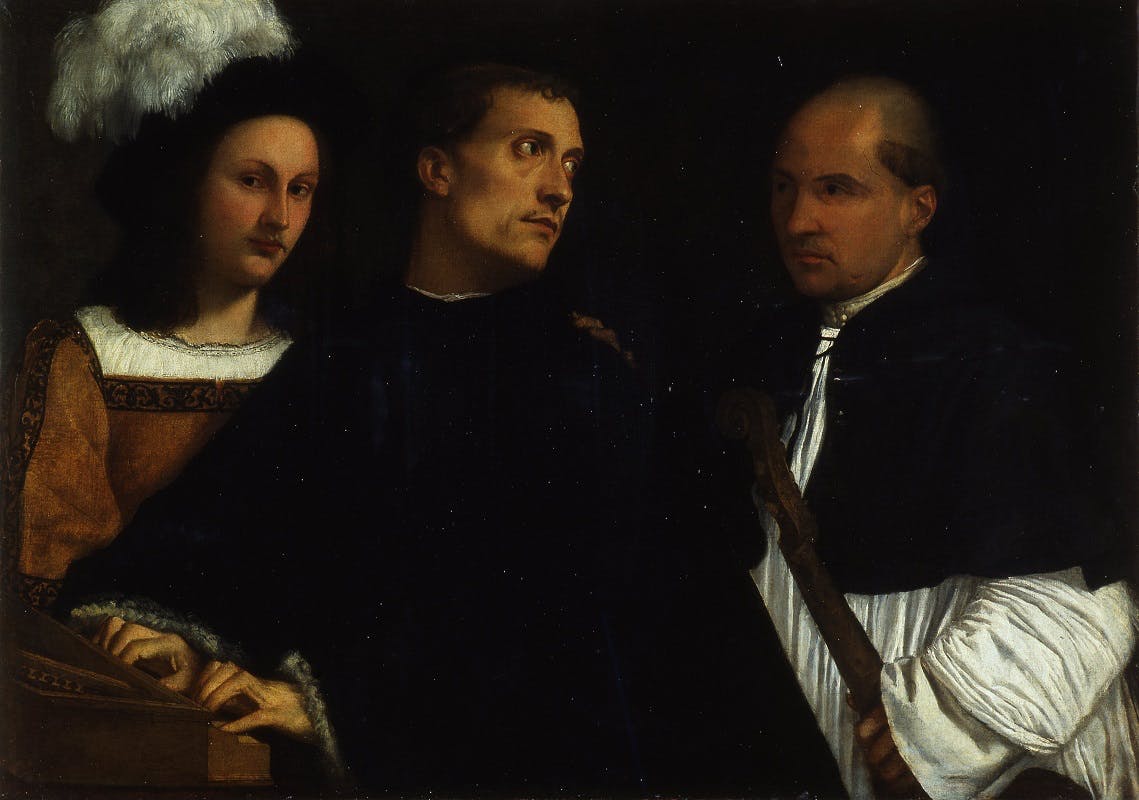 In this famous composition by Titian, the half-length portraits of three men are gathered together to play music: in the center an elegantly dressed man with a dark blue fur-trimmed cloak is focused on playing the spinet, a small sixteenth century harpsichord. His hands are still outstretched in the position of the chord on the keys, while his head and gaze are angled left towards the Dominican monk, another musician, who is touching his companion's shoulder to get his attention having taken down his own instrument, a viola da gamba, which now rests at his side. Outside this silent and reciprocal exchange of glance is the young singer on the left, an almost imperceptible smile upon his face and donning a feathered cap, an exquisite and coveted accessory associated with boldness and virility. It is difficult to attribute historical identities to the three figures, who some critics have suggested refer to well-known musicians of the time while others believe are imaginary faces created by Titian to animate a very popular pictorial subject, “Concerts”; this theme was widely explored in the cultured environments of the northern Italian courts from the late fifteenth to early sixteenth centuries, where musical instruction formed an essential part of a gentleman's education. Music, or rather playing music together is clearly the overarching theme of the painting, whose sounds seem almost audible to the viewer observing the mannerisms and gestures of the three figures.

Unanimously considered a work by Titian and dated around 1510 in the early days of the artist's career, the painting exhibits clear influences from Giorgione; in fact, for a long time Giorgione was credited with the work, beginning in the seventeenth century when the historian Claudio Ridolfi first documented the work in Venice as part of the collection of Paolo del Sera, a Florentine gentleman and collector of Venetian artwork who was a friend and advisor to Cardinal Leopoldo de’ Medici. The work was acquired by the latter in 1654, at the time still attributed to Giorgione, for his Florentine collections at the Pitti Palace. In 1675 the painting was exhibited in the Tribuna room of the Gallery of the Statues and Paintings of the Uffizi which housed the masterpieces of the Medici collections, before returning to the Pitti Palace as part of the collection of Grand Prince Ferdinand de’ Medici in 1697.