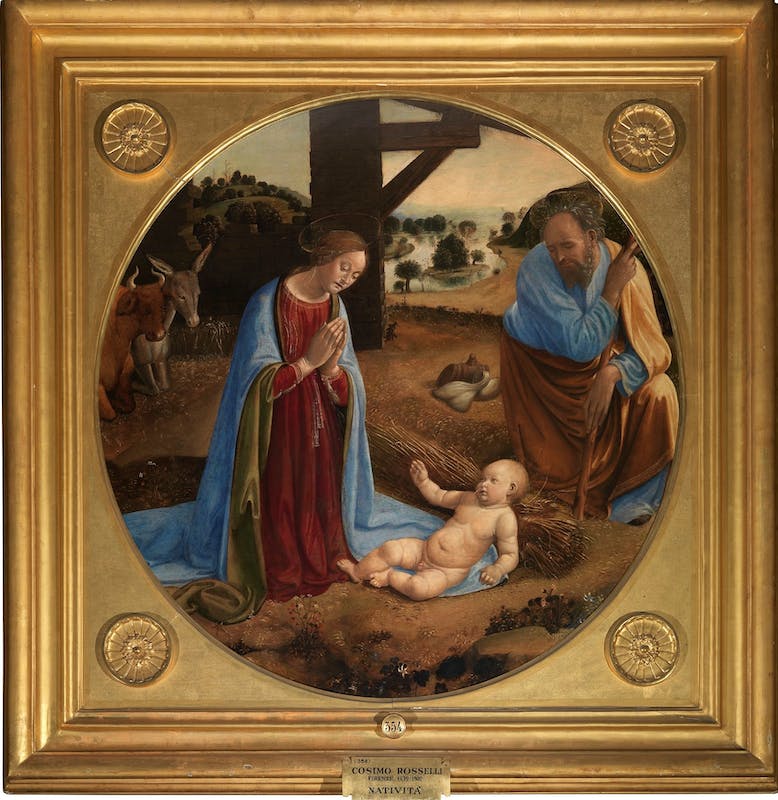 The Virgin Mary is kneeling in prayer in front of the Christ Child, whose nakedness emphasises how the son of God has become human. The child has been placed on his mother’s cloak and his head is resting on a bundle of hay, food for the ox and the ass, which also kneel before the child, recognising him as the Saviour, according to that written in the Golden Legend. In the background, next to St Joseph, we can see the pack saddle, in rough wood, together with the saddle bags, perhaps with reference to the journey of the holy family into Jerusalem, or to the flight to Egypt, to flee King Herod’s persecution.  Of the hut that shelters the three travellers, it is possible to see only the slope of the roof, and a pillar, in the shadows, elements that emphasise the pleasant riparian landscape and the light reflected from the Child.  The strawberry plants with their flowers and fruits in the foreground, are symbols of the incarnation of Christ.

This round painting shows one of Cosimo Rosselli’s most poetic compositions, offering a synthesis of both traditional compositional models and the naturalistic ideas derived from Flemish painting. There is no lack of classic suggestions, as shown in the pose of St Joseph, derived from Doidalsas’ Crouching Venus, probably known during the Renaissance thanks to copies from the Roman period.

This piece came to the Florentine Galleries in 1782, along with the property of the Chamber of Commerce of Florence. Therefore it was probably part of the assets belonging to one of the guilds, known as Arts.