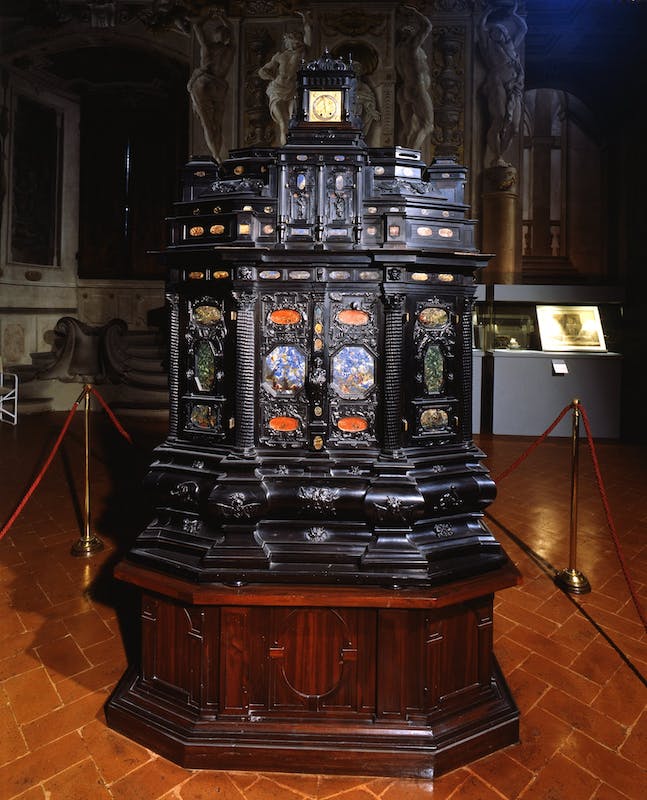 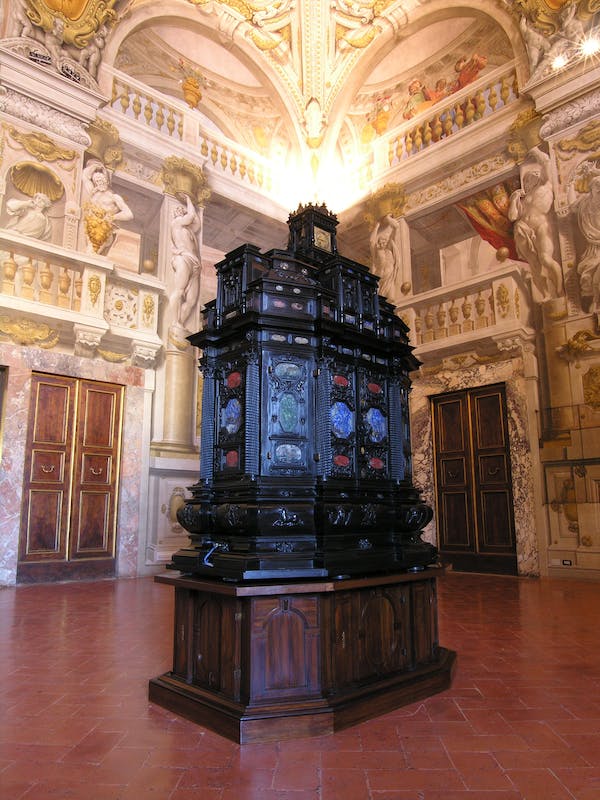 This extraordinary cabinet is enclosed by an austere octagonal block of ebony, enlivened by columns with carved figures and decorations that encase semiprecious stone tiles, some of which are painted with New and Old Testament subjects: the largest oval and octagonal tiles are made of precious lapis lazuli and jasper, and adorn the outside and inside of the two sets of doors of the four main compartments. The scenes of this complex iconographic system had to compete to create a spiritual path culminating in the exaltation of religion, triumphant over evil: the life of Jesus Christ runs horizontally along the blue lapis lazuli backdrop: The Nativity, Circumcision, Massacre of the Innocents, Baptism, Transfiguration, Kiss of Judas (outside), Christ before Pilate, Crucifixion, Transportation of Christ to the Sepulchre, Resurrection, Ascension and Pentecost (inside). At the top there is a clock that marked time, dominated by the silver figure of the risen Christ that struck the trampled and beaten Devil on the hour with a hidden mechanism.

Even the apparent richness of the outside, with secret drawers of various sizes, does not provide any clue as to the marvels contained within. Upon opening the first compartment, a rotating cube is revealed: the first side of the cube, entirely covered in semiprecious stone tiles with landscapes and birds, opens to reveal a compartment veneered in rosewood and ebony with stars and panes; the second side has a painting on copper depicting Saint Catherine’s Wedding, a copy from Correggio; the third side has eleven niches in gilt bronze, divided by eight small columns containing the statues of the twelve apostles and in the middle, Jesus Christ in amber; the last side shows a Crucifixion in an ebony niche composed of Christ crucified between the Virgin and Saint John in amber. Inside the second compartment on the right there is a small cabinet with two wooden shelves. Inside the third compartment there is a square panel depicting Jesus sitting between one of the Marys and an angel, closed in turn by a door with a mirror on the outside in ground crystal and two internal doors. Inside the fourth compartment there are five little boxes with a semiprecious stone oval with scenes from the Old Testament painted in oil.

This spectacular piece of furniture is part of a set of four similar pieces, made in Augsburg in the first half of the 17th century, following the indications of the antiquarian and art dealer Philip Hainhofer (1578 – 1647), who dictated the iconographic plan and provided the ebony carpenters, including Ulrich Baumgartner (1581 – 1652), with the model of the wooden structure. The cabinet, which was probably started about 1619 and completed in 1626, was presented on 12th April 1628 to the Archduke Leopold of Tyrol, Claudia de’ Medici’s husband, who purchased it in order to give it to the grand duke of Tuscany Ferdinando II on the occasion of his visit to Innsbruck. Brought to Florence, the cabinet was put in the Uffizi Gallery where it was recorded in the 1635 inventory.