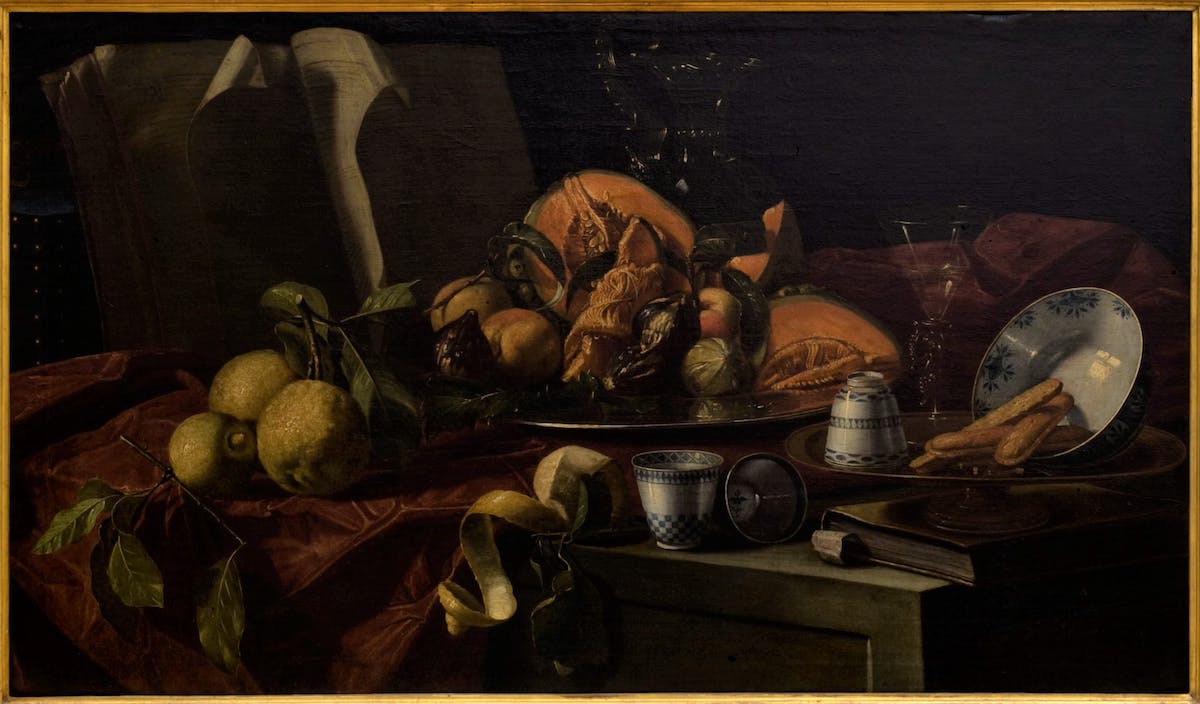 A clear light cuts through the details of the composition with the cleanness of a photograph.  The whole subject has been studied with millimetric precision, as seen in the pentimento, evident in the depiction of the melon, made smaller so as not to be too invasive. The framing is diagonal and places the edge of the chest in the foreground. The two books in the opposite corners and the velvet cloth with golden studs direct the gaze towards other depths, with the flat, dark background representing a point for comparison. The painter has chosen a mix of subjects: ripe fruit of the season on a silver plate, citrus fruits corresponding to the Medici’s botanical preferences, ultra-fine crystals, polished, fine blue and white porcelain, and books that allude to the constant pleasure of reading. Of these, the book on the stand with the savoiardi biscuits has a parchment bookmark carrying the artist’s signature: a nonchalant trompe-l’oeil effect that is his recognized specialty, and which is repeated in the peeled lemon, dropping over the side of the table.

Cristoforo Munari is an artist of much-vaunted elegance who refined his repertory in Rome under the Nordic still life artists after training in Emilia – including the German painter Christian Berentz – and stands out due to his closer adherence to reality, including in his differentiated, camouflage painting effect, adjusted to the truth of the materials. He came into contact with the Grand Prince of Tuscany, Ferdinando de’ Medici, first in letters from Rome, then in Florence where, in 1706, he enrolled at the Florentine Academy of Drawing, showing his activity in the Grand Duchy, which saw him in the service of the Medici family, as well as of other collectors.  With the early death of Ferdinando, Munari’s fortune gradually faded, leaving him to end his days in poverty and dedicating himself above all to restoration.