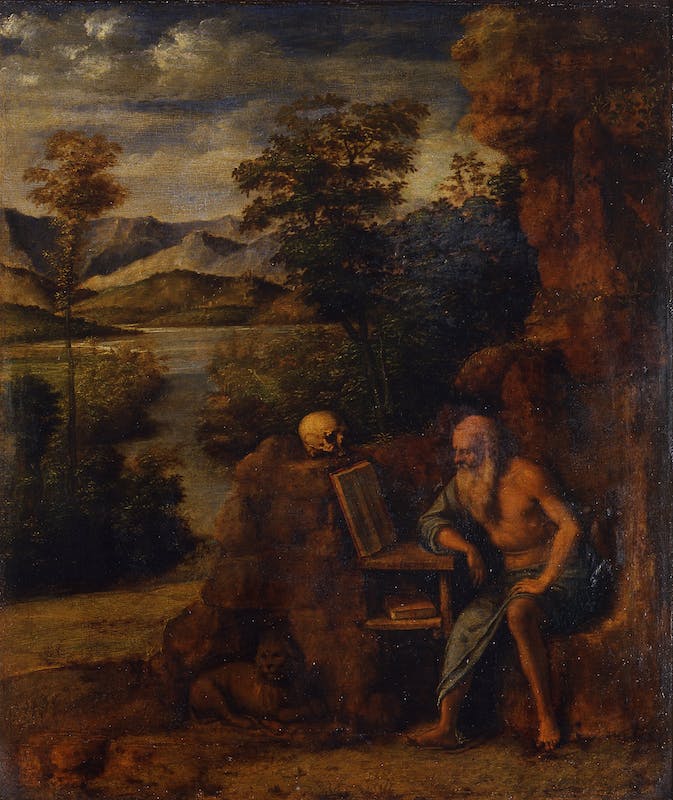 Compared to the previous versions on the subject of St. Jerome in the desert, Cima da Conegliano has changed perspective, combining the theme of the learned saint with that of the penitent hermit. This choice was due to the type of buyer for the work itself, who would have been more interested in the figure of St Jerome as scholar and Father of the Church. In fact, the saint, during his wandering in the desert of Chalcis, perfected his knowledge of Greek and studies of Hebrew before moving to Rome in 382 as an advisor to Pope Damasus I, where he revised the four Gospels in Latin, the Psalter and a large part of the Old Testament. He also defined the so-called Vulgate of the Bible, recognised by the Council of Trent as the official Latin text.

Through a harmonious blend of figure and landscape, the artist has succeeded in reflecting the calm climate of meditation and solitude in which the protagonist is immersed. The hermit, simply dressed, is shown sitting on a rock and consulting an open book before him. Around him are the typical attributes of St. Jerome: the pen and inkwell, the tamed lion and the skull. This latter is placed exactly in the centre of the composition and symbolises vanity and penitence.

The work also carries with it some influences of Bellini and is considered to be the latest of the artist’s works on this subject. Contact with masters from the new generation, including Giorgione and Titian, can be clearly seen in the depiction of the landscape, represented here with painstaking detail: a bold view with sharp crags, dotted with vegetation and opening on a more distant scene in which the mountains fade into light blue tones, due to the effect of mist, while a calm stream ripples over the soft slopes.

The work was once in the Venetian collection of the Giovanelli princes before passing to Alessandro Contini Bonacossi.