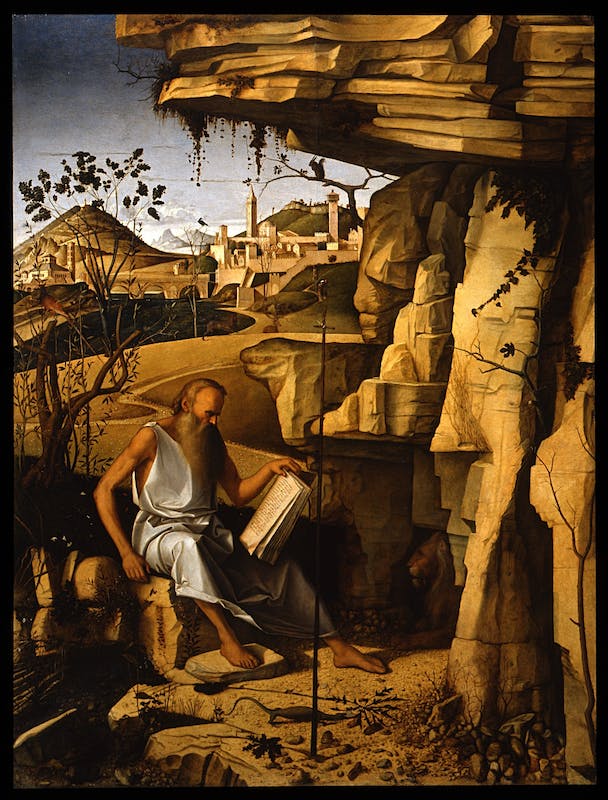 St Jerome is portrayed in the dual role of penitent hermit in the wilderness, and humanist, intent on reading. He is sitting in a wild, desert landscape with a city in the background that signifies the contrast between nature and civilisation. A lion, hidden in its den, from whose paw Jerome is said to have removed a thorn, is keeping him company. In the foreground, a thin cross stands in the ground, while a lizard crawls behind it. This animal traditionally symbolised death and the resurrection, given its ability to hibernate. The multifaceted figure of St Jerome (347 – 419/420), hermit, penitent, cardinal and outstanding humanist, who had translated the Bible from Greek into Latin, was an extremely popular subject in 15th and 16th century paintings in Veneto, as a supreme example of the harmony between Classical knowledge and Christian virtue. He was therefore a subject favored by a refined, educated public and was commonly depicted in smaller works used for private worship. The landscape, with the desert and city, may have represented hope for a return to a harmony between nature and humanity. In Giovanni Bellini’s works, the depiction of the landscape takes on an essential role: castles, mountains, rocks, trees and clouds have the same importance as the main subjects depicted, whether holy or profane. The city that stands out in the background is imaginary, although it consists of real – albeit not Venetian - architecture: the church of San Vitale and the Mausoleum of Theodoric in Ravenna, the Bridge of Tiberius in Rimini, and the bell tower of Sant’Anastasia in Verona, all buildings that Bellini had probably been able to draw and then use in his compositions.

The painting comes from the Papafava collection in Padua. Some scholars believe that it could be the same panel of St Jerome by Giovanni Bellini mentioned in 16th and 17th century historiography in the church of Santa Maria dei Miracoli in Venice.