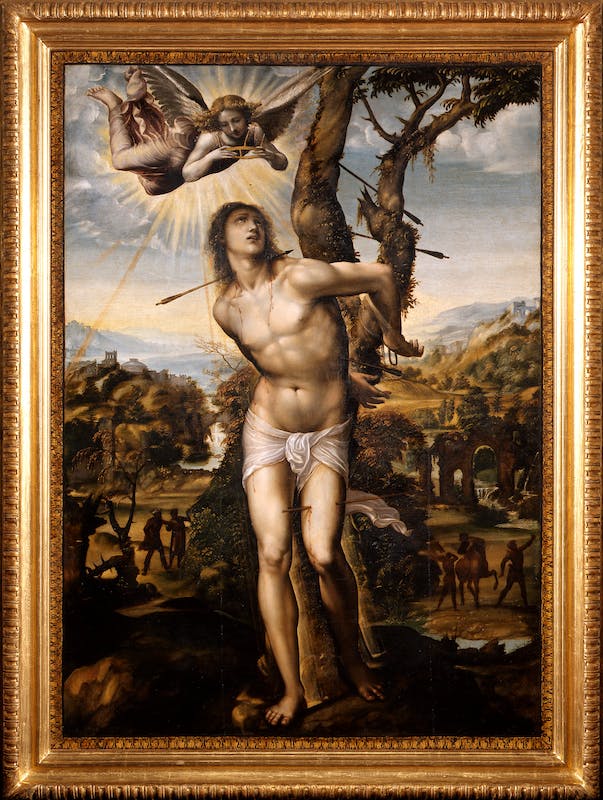 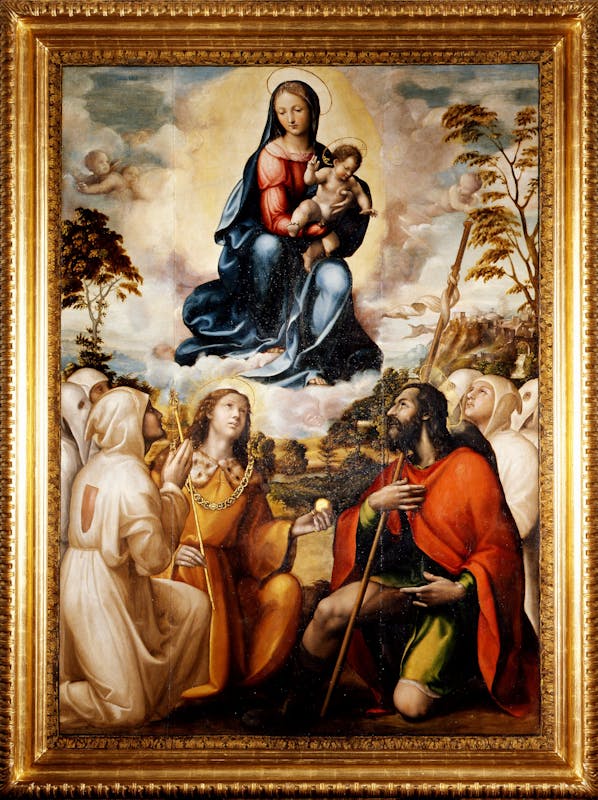 Painted on both sides, in relation to the use for which the work was destined, which required it to be visible from both the front and the rear, the processional gonfalon was ordered to Sodoma in 1525 by the members of the company of St Sebastian, one of the many associations of compassion and assistance for the sick formed in the area of Porta Camollia in Siena. Traditionally, Sebastian, praetorian of the Roman army, a man of Christian faith who was sentenced to death by Diocletian, was assigned the role of protector from epidemic illnesses. For many centuries, and in particular between the 14th and 18th centuries, these illnesses repeatedly scourged the lands of Europe. The passion of the saint, who was led to the Palatine hill, tied to a tree, and shot with arrows, is defined in the iconography from the Renaissance on. In this context, Sebastian embodies an ideal of strong, youthful beauty, victorious even in the face of the most cruel torments, such as those inflicted by illnesses that were unknown and fatal in those centuries, but with which man had learned to coexist, by surrounding himself with a network of social solidarity, such as the brotherhoods. Sodoma places the protagonist in the foreground, painting him in a bright light with delicate chiaroscuro shading against a background of landscape studded with ancient ruins, of the kind he had learned about in Rome, by observing the example set by Raphael and his pupils. The legend of the saint, defined by the hagiographers as “athleta Christi”, coincided - especially in Renaissance sensitivity - with the reference to a perfect, athletic body, twisted with pain and following the shape of the tree trunk to which he is bound. Sodoma, like his peers, had access to a vast range of ancient Greek and Roman statues, a never-ending supply of models and shapes that he used to pinpoint the right level of formal perfection and at the same time to personify the expression of the drama. His greatest inspiration came from the most celebrated and copied sculpture in Rome in the 16th century: Laocoön and his sons, a group of marble statues found on the Oppian Hill and immediately invested with a formidable, long-lasting iconographic popularity. The icon of the saint, weak and suffering, with tears streaming down his beautiful face as he receives the crown of martyrdom from the angel, was the first to appear to the faithful during the processions, arousing the most emotional senses of compassion and faith. But the function of the standard and its message are completed in the scene depicted on the back, a more solemn and official image, celebrating the Virgin, protector of Siena, whose glance rests on the group of devotees kneeling at the bottom of the painting. St Sigismondo and St Rocco feature in the centre of these. Joint leaders of the company, they too were among the first Christian martyrs. In particular, San Rocco (Montepellier 1345/1350- Angera?, Varese 1376/79) is another figure traditionally linked to the context of the healings for his role as protector from the plague. Legend has it that Rocco, during a pilgrimage to Rome, having donated all his belongings to the poor, stopped at Acquapendente, near Viterbo, dedicating himself to aiding the sick and working miraculous healings that spread his fame far and wide. He himself caught the plague and fell ill but recovered and soon set off again on his way, continuing his charitable work. Rocco is said to have died in prison, having been arrested near Angera by some soldiers, as a suspicious person. His cult became extremely widespread throughout northern Italy, especially in Lombardy. Sodoma portrays the Saint with the walking stick of a pilgrim and the angel with the traditional attributes, while indicating on his right leg the ‘boil’, the puffy swollen mark left by the terrible black plague. The brothers of Porta Camolia are positioned alongside Sigismondo and Rocco, dressed in white tunics and hoods, dispensers of that moral and bodily comfort they felt a civic duty to administer, traces of which still survive today in the traditional Tuscan care-giving ethos.

The identifying and functional values of this work continued to be held in great esteem over time, even when the oratory was restored. In fact, the brothers refused to sell it to merchants from Lucca for a considerable sum of money, determined to preserve it in its original location. But they were helpless in the face of the request made by the Grand Duke Pietro Leopoldo, who purchased the work for the Florentine gallery in 1784.