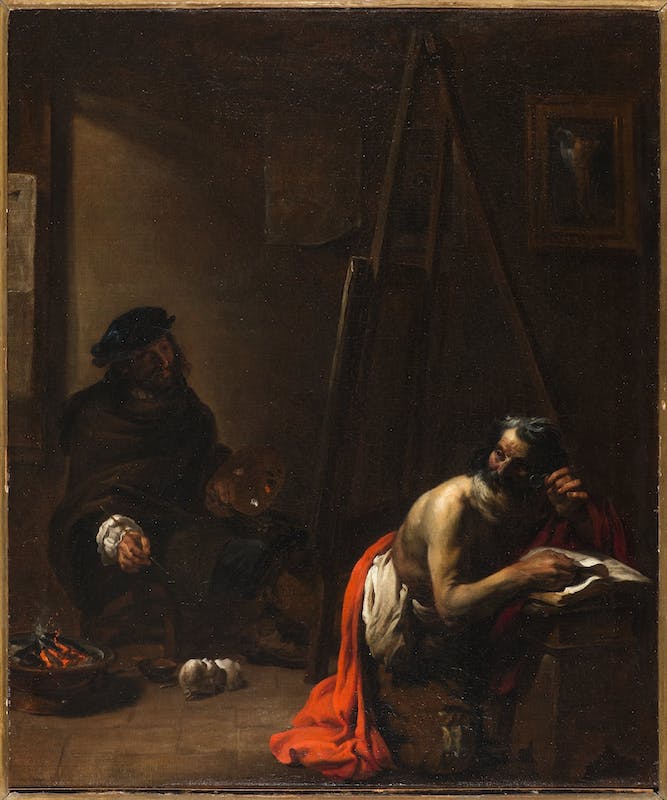 The painting is a self-portrait in an unusual setting: the painter, Michelangelo Cerquozzi, is portrayed in his studio in Rome before his easel, painting an elderly man with a bare torso kneeling in front of a lectern, in the foreground of the painting. His pose and characteristics imply that he is a model for the figure of Saint Jerome.

The depiction of the artist’s studio is very interesting: lying around on the floor there is a marble bust that must have been used as a model; not far away a brazier with burning coals heats and lights up the bare room; a sketch on paper and a framed oil painting of the crucified figure of the Good Thief can be seen on the wall. This painting certainly makes reference to Cerquozzi’s artistic activities. He painted this subject, much appreciated by Roman collectors, several times. The documents found relating to the painter’s studio, which was on the Pincio in Rome, indicate that the materials and objects kept in it were of roughly the same sort, while historical sources suggest that the artist used Romans as models, in accordance with the custom of painters who adopted Caravaggio’s style. Therefore, it is an accurate description of the work place of the painter who wanted to portray himself and his activities in his usual living space.

From a stylistic point of view, the light and colour choices are characteristic of Cerquozzi’s painting and the methods that he absorbed during his association with the painter Jacob de Hase, known as Giacomo Fiammingo.

On the back the canvas there is the ancient inscription: “by Michelangelo delle Bambocciate”, presumably late 18th-century, which refers to the genre of painting with which Cerquozzi was and still is generally associated, namely a follower of Bamboccio (Pieter Van Laer), an artist who introduced Flemish-style painting in Rome.

The self-portrait comes from Florence’s historical Casa Capponi collection and was purchased by the Uffizi Gallery from the antiques market in 2017.