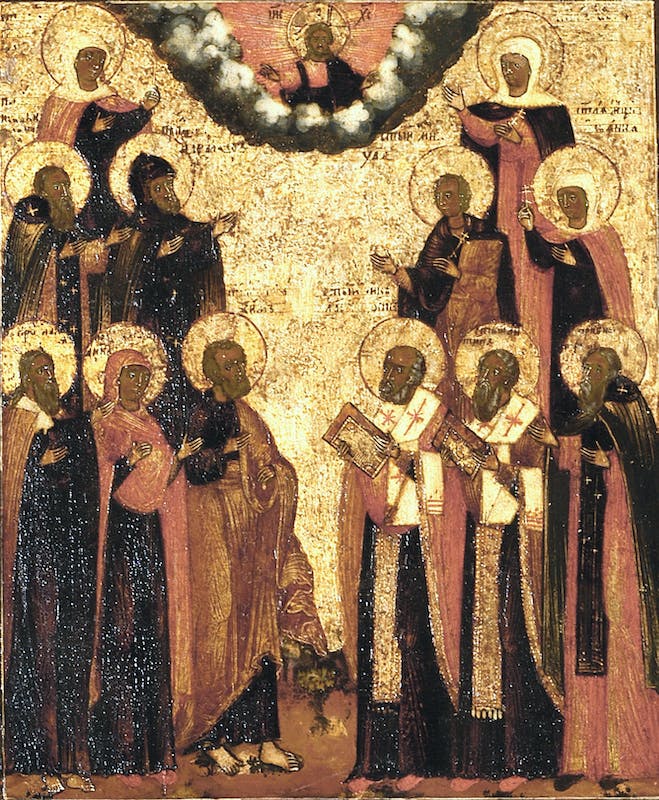 Arranged on three registers, some saints turn in prayer to Christ in Glory, who blesses with both hands as the High Priest, that is, the head of the Church. Pictured below, from the left, are the prophet Elijah, Joachim and Anna, a holy monk, perhaps Dimitrij of Prilukij, the martyr Antipas, and Bishop Nicholas of Myra. In the second register, on the left are portrayed in monastic robes Isaac Dalmatian and Prince Alexander Nevskij, while on the right are the martyrs Juliana and Uar. It is not possible, however, to identify the two saints at the top of the icon, whose names originally inscribed next to the halo are now rubbed off.

The saints depicted are very heterogeneous and probably represent the heavenly patrons of the members of a family. In popular devotion, particular veneration was reserved for Saints Nicholas and Elijah, intercessors to Christ, while the martyr Antipas was often invoked for healing toothaches.

The icon can be traced to a central Russian workshop of the second quarter of the 18th century. Alexander Nevskij is portrayed as a monk, according to the iconography in vogue until 1724, when the synod decided that the saint should instead be represented as a great prince. However, even after this date, the ancient iconographic model remained in use for some time, especially in archaising workshops, which repeated 17th century models.