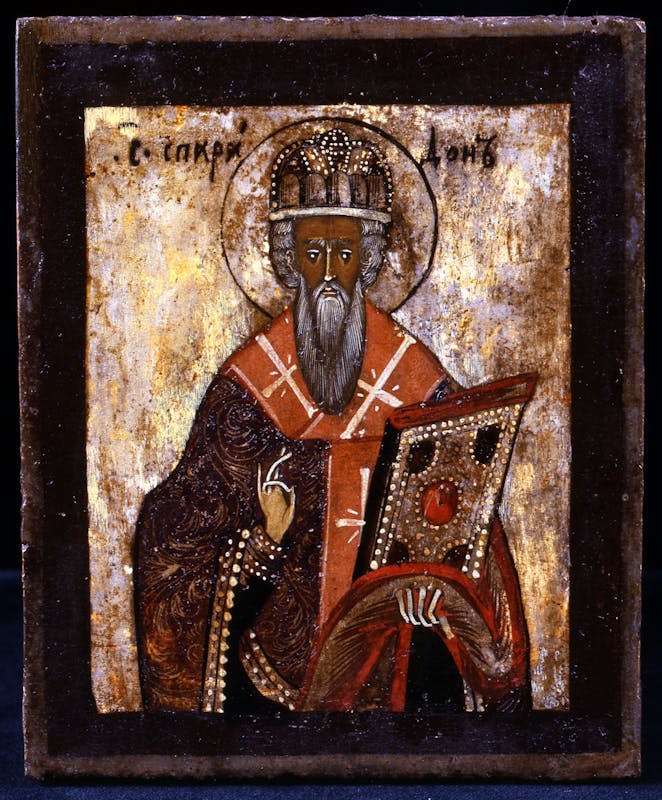 Spyridion, one of the most venerated bishop saints in the Orthodox Church, who lived between the third and fourth centuries, wears a dark robe topped by a precious phelonion, a mantle-shaped liturgical vestment typical of the Byzantine tradition. The bishop’s insignia are the omophorion, a long stole decorated here with large white crosses, and the mitre, placed on his head. Saint Spyridon, identified by the inscription on the sides of his nimbus (“С(ВЯТИТЕЛЬ) СПИРИДОНЪ”, i.e., Bishop Spyridon), is depicted in the act of blessing, while in his left hand he holds the preciously ornamented book of the Holy Scriptures.

According to various hagiographic texts, Spyridon, originally from Cyprus, was born into a poor family and in his youth, before becoming Bishop of Trimythous, had been a shepherd, which is why he is often depicted with a shepherd’s hat on his head. Tradition has it that he took part in the Council of Nicea in 325, when, in order to explain the dogma of the Trinity, he performed a miracle: holding a brick in his hand, he broke it down into the three elements that went into forming it, fire, water and earth, thus demonstrating the authenticity of the nature of the Holy Trinity where three are one.