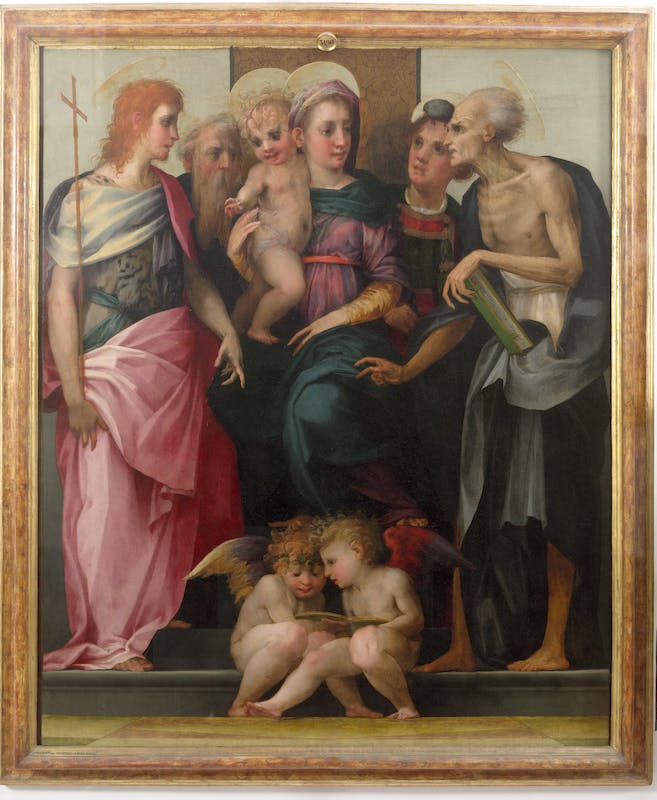 Giovanni Battista di Jacopo, nicknamed Rosso Fiorentino (“rosso” means red) due to the colour of his hair, trained in the workshop of Andrea del Sarto alongside his peer, Pontormo. From his early Florentine works, he displayed a particularly original style, characterised by a strong anti-classical energy, which tended to break out of the balanced Renaissance framework and favour innovative formal solutions with a powerful, dramatic charge. In 1524, he moved to Rome, where the exasperated expressive research of his previous years gave way to a sophisticated, intellectual formal elegance. Following the Sack of Rome in 1527, he travelled around many Italian cities, eventually reaching France. There, he secured a position at the court of King Francis I, who commissioned him to decorate the palace in Fontainebleau, the Gallery of which would become a cornerstone of international Mannerism.

Carthusian monk Leonardo Buonafede, prior of the Hospital of Santa Maria Nuova, commissioned him to execute this painting in 1518, to honour the testamentary bequest of Francesca de’ Ripoi, a Catalan widow who had died in Florence the previous year. The large altarpiece was to be positioned above an altar of the Ognissanti Church, where the widow had been buried. According to the commissioning contract, the painting was supposed to depict the Virgin and Child among the saints John the Baptist, Benedict (who shared the same name as the widow’s father), Leonard (who shared the commissioner’s name) and Jerome. The painter undertook to deliver the work by the end of June that same year, but when it was completed, the commissioner voiced his dissatisfaction for the result and the work was relegated to the church of Santo Stefano in Grezzano. Vasari relates that Leonardo Buonafede deemed the altarpiece “sketchy” and complained about the bizarre unseemliness of the saints, who resembled “cruel, desperate” devils. The dispute between painter and commissioner also had legal consequences, since Rosso Fiorentino took Buonafede to court for withholding nine florins from the twenty-five they had negotiated as payment.

The fact that the painting was put to a different use also explains its divergence from the initial iconography.

And in fact, the studies carried out on the work have revealed the existence of a previous version beneath the one visible today. St Leonard was transformed into St Stephen, after whom the church in Grezzano was named, and the saint’s attributes were changed accordingly, replacing Leonard’s shackles with the stone on Stephen’s forehead. Instead, St Benedict was changed into St Anthony the Abbot, and the mark of the Tau was added to his monk’s habit.

The other two saints at the sides of the composition are St John the Baptist and St Jerome, who shared the experience of penitence in the desert. Buonafede’s criticism of the painting reverberates in the figure of St Jerome, whose skeletal body, emaciated and scowling face and grasping hands embody the restless and anti-classical spirit of the painter’s early phase.

The austerity of the composition is mellowed by the two sweet angel children sitting on the steps of the Virgin’s chair, engrossed in the Holy Scriptures.

The disliked painting by Rosso Fiorentino