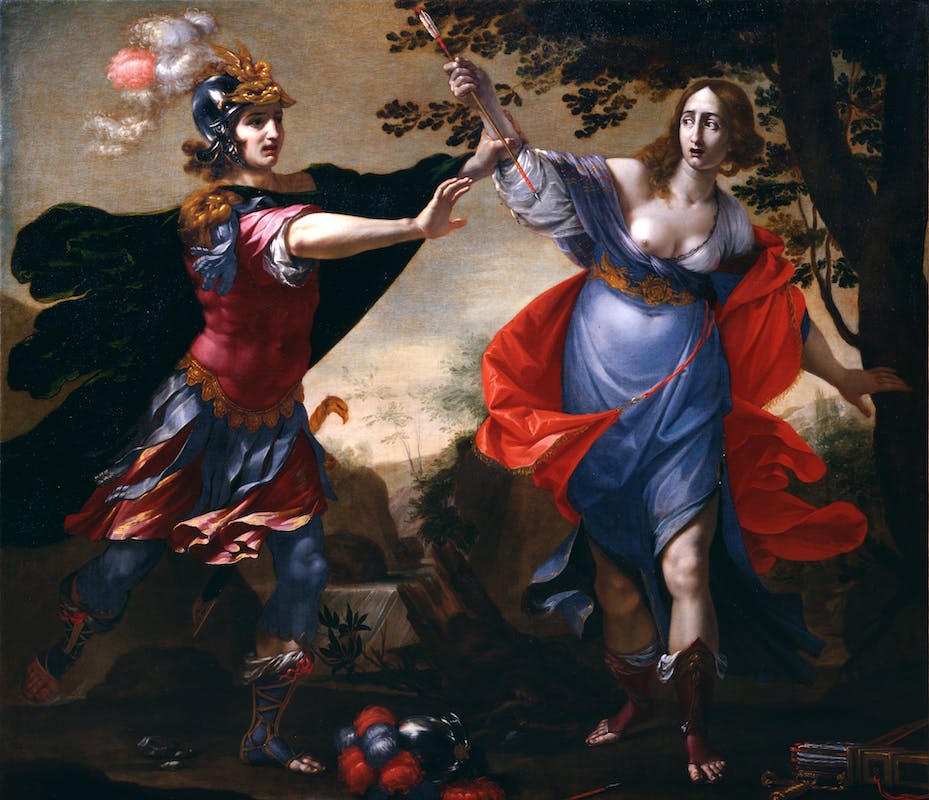 This work was part of a cycle of nineteen paintings inspired by the poems of Ovid, Ariosto and Tasso, commissioned by the Cardinal Carlo de’ Medici and destined to decorate his apartments in the Casino di San Marco. The episode shown here is narrated in the last canto of the Jerusalem Delivered, which centres on the terrible battle between the Crusaders and the Egyptian army, when Rinaldo and Armida challenge each other to a duel. The sorceress, after attempting in vain to strike the young warrior, with whom she is still in love, decides to kill herself with the same arrow used in combat. Rinaldo seizes her “when to her back he stepped, and stayed her arm/Stretched forth to do that service last, last harm.  She turns and ere she knows, her lord she spies, Whose coming was unwished, unthought, unknown, She shrieks, and twines away her sdainful eyes.From his sweet face she falls dead in a swoon.” The dramatic excitement of Tasso’s verses has a precise response in Dandini’s painting, where life-sized figures move across the foreground, evoking the heroes of the melodrama that as the century progresses, had its beginnings in Florence, in the cultured, elegant setting of the Florentine Camerata de’ Bardi.  The dramatic tone of the expressions, the theatrical pose of the figures, and the precious nature of the painting, rich with colour and light effects, with elegant ornate detailing reflect the orientation of Florentine art in the early 17th century, strongly inspired by the harmonies of “recitar cantando”.  The canvas arrived at the Florentine galleries from a private collection in 1913.